LVIV, Ukraine (AP) — Buses packed with people fleeing the Russian invasion in Ukrainebegan a procession along a snowy road out of one city Tuesday, as a new effort to evacuate civilians along safe corridors finally got underway.

The Russian onslaught has forced 2 million people to flee Ukraine, U.N. officials said Tuesday, but has trapped others inside besieged cities that are running low on food, water and medicine amid the biggest ground war in Europe since World War II.

Previous attempts to lead civilians to safety have crumbled with renewed attacks. The route people took Tuesday out of the eastern city of Sumy was one of five promised by the Russians to offer civilians a way to escape the fighting.

Video posted by the Ukrainian state communications agency showed people with bags boarding buses, but it was not clear how long the effort would last.

“The Ukrainian city of Sumy was given a green corridor, the first stage of evacuation began,” the agency tweeted. Sumy is just 50 kilometers (30 miles) from the Russian border.

With the invasion well into its second week, Russian troops have made significant advances in southern Ukraine but stalled in some other regions. Ukrainian soldiers and volunteers fortified the capital, Kyiv, with hundreds of checkpoints and barricades designed to thwart a takeover. A steady rain of shells and rockets fell on other population centers, including the Kyiv suburb of Bucha, where the mayor reported heavy artillery fire.

“We can’t even gather up the bodies because the shelling from heavy weapons doesn’t stop day or night,” Mayor Anatol Fedoruk said. “Dogs are pulling apart the bodies on the city streets. It’s a nightmare.”

In one of the most desperate cities, the encircled southern port of Mariupol, an estimated 200,000 people — nearly half the population of 430,000 — were hoping to flee, and Red Cross officials waited to hear when a corridor would be established. 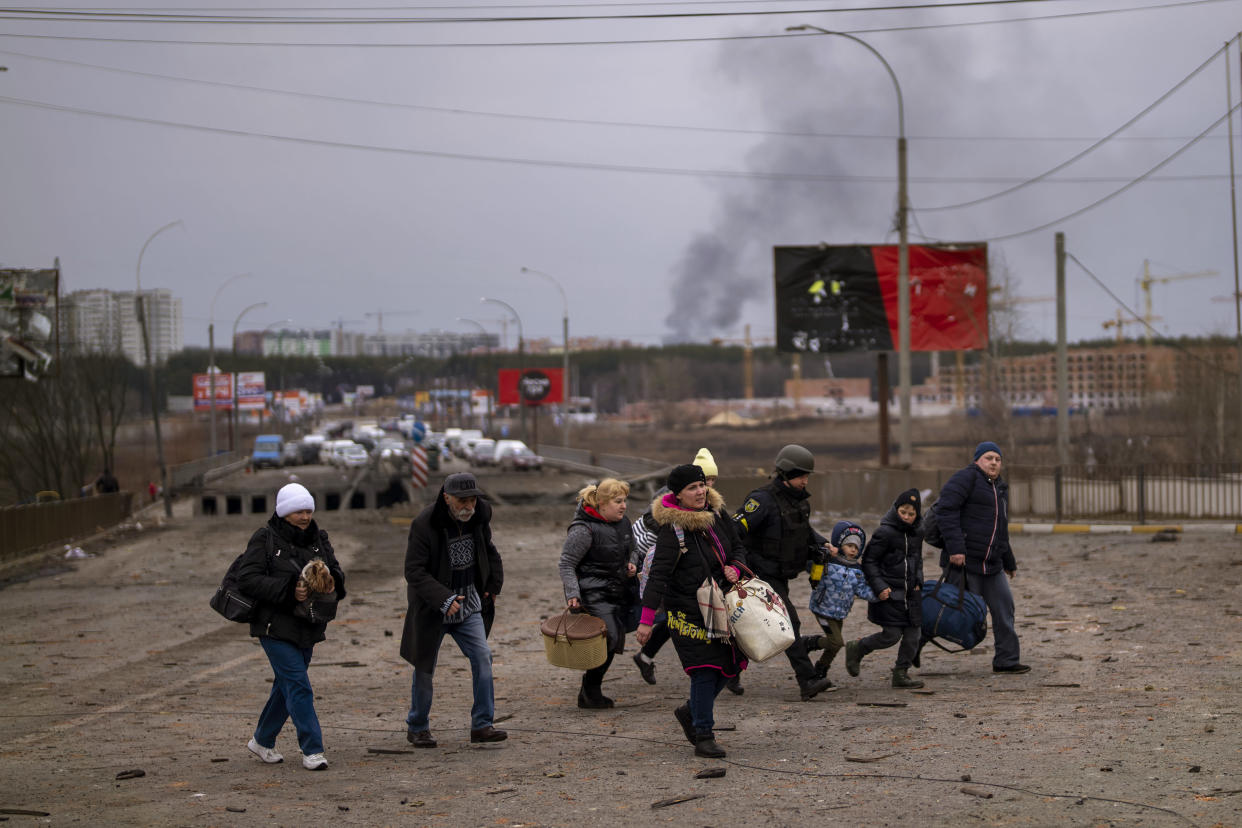 Russia's coordination center for humanitarian efforts in Ukraine and Ukrainian Deputy Prime Minister Iryna Vereshchuk both said a cease-fire was agreed to start Tuesday morning to allow some civilians to evacuate, but the two sides differed on where they said the corridors would be.

Russia's coordination center suggested there would be more than one corridor, but that most would lead to Russia, either directly or through Belarus. At the U.N., however, the Russian ambassador suggested corridors from several cities could be opened and people could choose for themselves which direction they would take.

Vereshchuk, meanwhile, only said that the two sides had agreed to an evacuation of civilians from the eastern city of Sumy, toward the Ukrainian city of Poltava. Those to be evacuated include foreign students from India and China, she said.

She reiterated that proposals to evacuate civilians to Russia and its ally Belarus, which was a launch pad for the invasion, were unacceptable.

Demands for effective passageways have surged amid intensifying shelling by Russian forces. The steady bombardments, including in some of Ukraine’s most populated regions, have yielded a humanitarian crisis of diminishing food, water and medical supplies.

“The problem is that for one soldier of Ukraine, we have 10 Russian soldiers, and for one Ukrainian tank, we have 50 Russian tanks,” Zelenskyy told ABC News in an interview that aired Monday night. But he noted that the gap in strength was closing and that even if Russian forces “come into all our cities,” they will be met with an insurgency.

A top U.S. official said multiple countries were discussing whether to provide the warplanes that Zelenskyy has been pleading for.

The besieged city of Mariupol was short on water, food and power, and cellphone networks are down. Stores have been looted as residents search for essential goods. Police moved through the city, advising people to remain in shelters until they heard official messages broadcast over loudspeakers to evacuate. 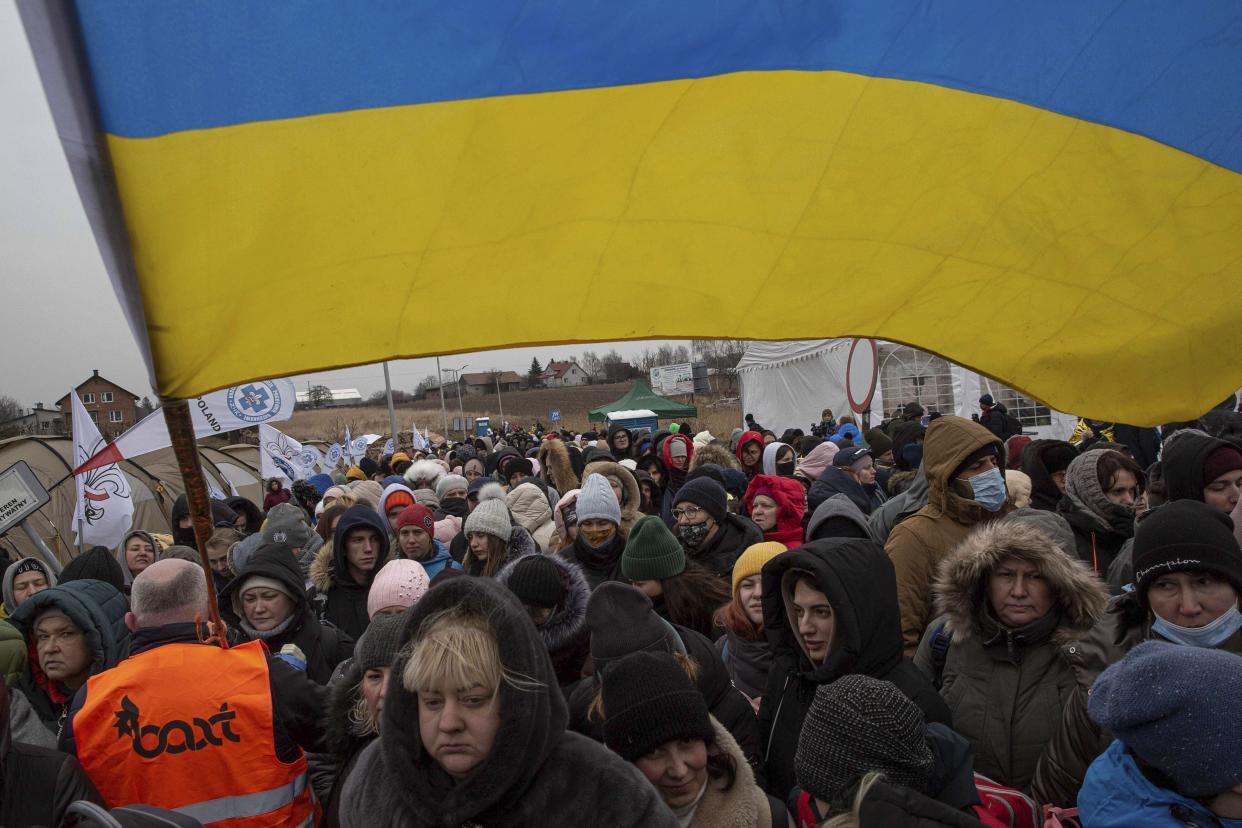 Hospitals in Mariupol are facing severe shortages of antibiotics and painkillers, and doctors performed some emergency procedures without them.

The lack of phone service left anxious citizens approaching strangers to ask if they knew relatives living in other parts of the city and whether they were safe.

The battle for Mariupol is crucial because its capture could allow Moscow to establish a land corridor to Crimea, which Russia seized from Ukraine in 2014.

Several hundred kilometers (miles) west of Mariupol, Russian forces continued their offensive in Mykolaiv, opening fire on the Black Sea shipbuilding center of a half-million people, according to Ukraine’s military. Rescuers said they were putting out fires caused by rocket attacks in residential areas.

Ukraine’s general staff of the armed forces said in a statement Tuesday that Ukrainian forces are continuing defense operations in the suburbs of the city.

The general staff said “demoralized” Russian forces are engaging in looting in places they have occupied, commandeering civilian buildings like farm hangars for military equipment, and are setting up firing positions in populated areas. The claims could not be independently verified.

Ukrainian defense forces were also involved in operations in the northern city of Chernihiv and the outskirts of Kyiv, the general staff said.

In Kyiv, soldiers and volunteers have built hundreds of checkpoints to protect the city of nearly 4 million, often using sandbags, stacked tires and spiked cables. Some barricades looked significant, with heavy concrete slabs and sandbags piled more than two stories high, while others appeared more haphazard, with hundreds of books used to weigh down stacks of tires.

“Every house, every street, every checkpoint, we will fight to the death if necessary,” said Mayor Vitali Klitschko.

“I think it struck the fourth floor under us,” Dmitry Sedorenko said from his Kharkiv hospital bed. “Immediately, everything started burning and falling apart.” When the floor collapsed beneath him, he crawled out through the third story, past the bodies of some of his neighbors.

In the small town of Horenka, where shelling reduced one area to ashes and shards of glass, rescuers and residents picked through the ruins as chickens pecked around them.

“What are they doing?” rescue worker Vasyl Oksak asked of the Russian attackers. “There were two little kids and two elderly people living here. Come in and see what they have done.” 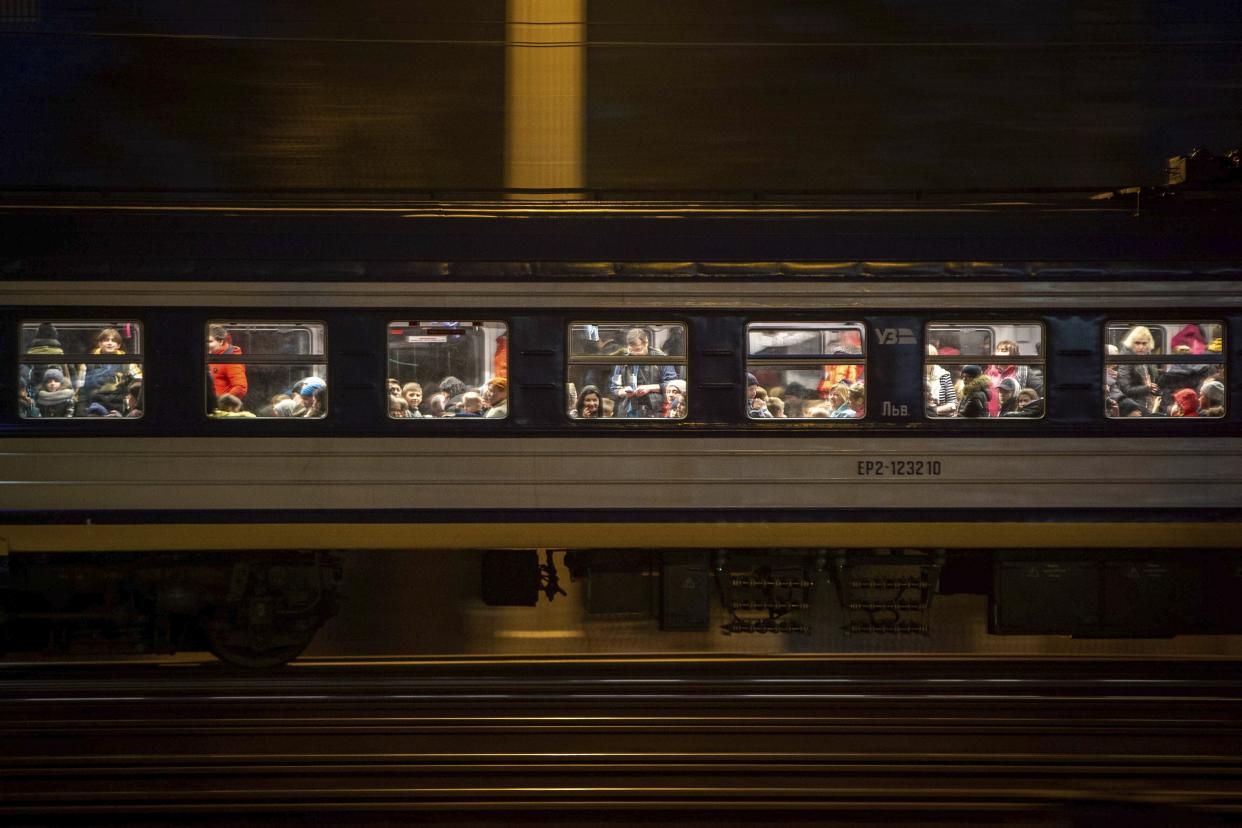 At The Hague, Ukraine pleaded with the International Court of Justice to order a halt to Russia’s invasion, saying Moscow is committing widespread war crimes.

The fighting has sent energy prices surging worldwide and stocks plummeting, and threatens the food supply and livelihoods of people around the globe who rely on crops farmed in the fertile Black Sea region.

On Monday, Moscow again announced a series of demands to stop the invasion, including that Ukraine recognize Crimea as part of Russia and recognize the eastern regions controlled by Moscow-supported separatist fighters as independent. It also insisted that Ukraine change its constitution to guarantee it won’t join international bodies like NATO and the EU. Ukraine has already rejected those demands.

Zelenskyy has called for more punitive measures against Russia, including a global boycott of its oil exports, which are key to its economy.

“If (Russia) doesn’t want to abide by civilized rules, then they shouldn’t receive goods and services from civilization,” he said in a video address.