Labour frontbencher Clive Lewis claimed ‘black members of the Cabinet had sold their souls’ to serve under Boris Johnson, who he labelled a ‘racist PM’.

But James Cleverly, the chairman of the Conservative Party, hit back and said Mr Lewis was ‘bitter’ and ‘scared’ of the newly re-energised Tories.

The extraordinary row exploded after Mr Cleverly had poked fun at an old claim made by Jeremy Corbyn that ‘only Labour can be trusted to unlock the talent of Black, Asian and Minority Ethnic people’.

Mr Cleverly, who was made Tory chairman and Minister without Portfolio in Mr Johnson’s reshuffle, had tweeted: ‘Just finished my first Cabinet meeting, looking at my colleagues around the cabinet table when this tweet popped back into my memory.

‘Seeing a lot of “unlocked talent” in the room.’

Allies of Mr Johnson had hailed his new Cabinet for its diversity after he appointed numerous MPs from Black, Asian and minority ethnic (BAME) backgrounds.

But Mr Lewis replied to Mr Cleverly and said: ‘Genuine congratulations James. I mean it.

‘I’m just sorry you & the other black members of that cabinet had to sell your souls & self-respect to get there.

‘You serve under a racist PM and sit next to a minister for equalities previously fired for the Windrush scandal.’ 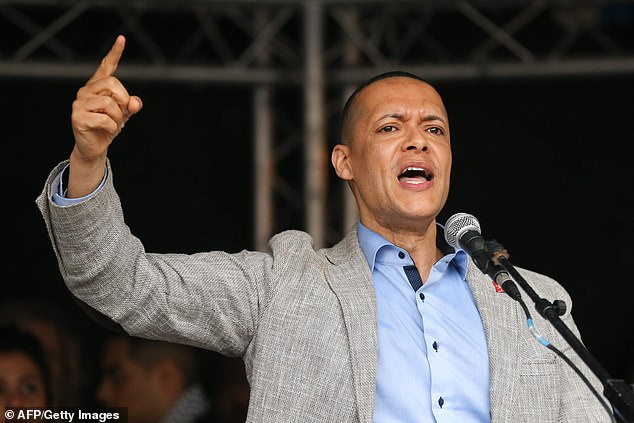 Clive Lewis, the Labour frontbencher, accused James Cleverly of selling his soul to get into the Cabinet 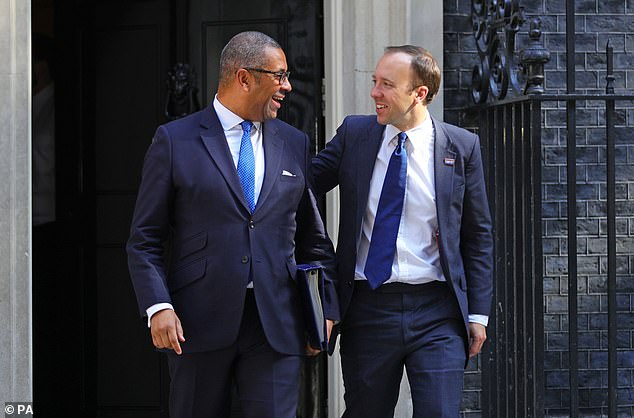 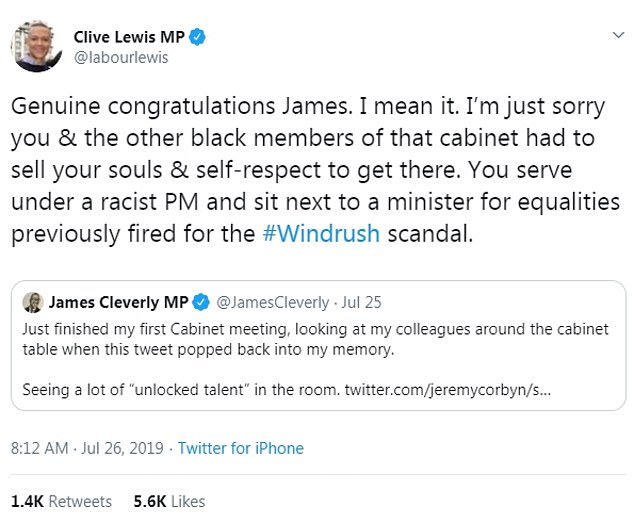 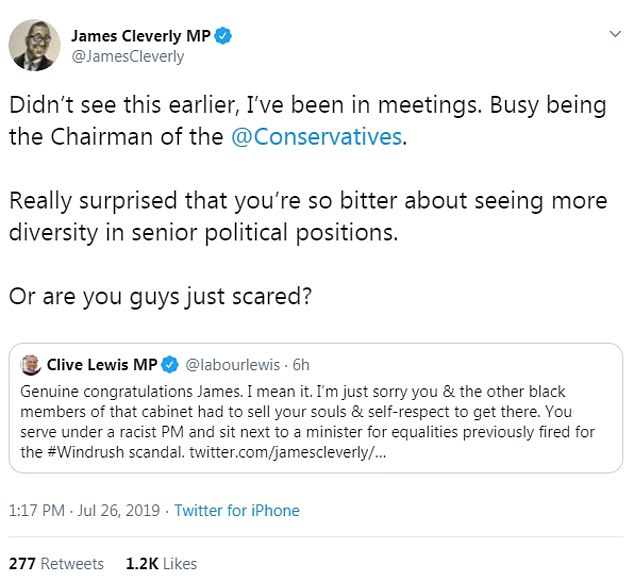 The latter remark was aimed at Amber Rudd who was forced to quit as home secretary in April 2018 over her handling of the Windrush scandal.

She kept her job as Work and Pensions Secretary in the reshuffle and was also made Women and Equalities Minister after Penny Mordaunt was sacked from the Cabinet.

Mr Cleverly hit back and said: ‘Didn’t see this earlier, I’ve been in meetings. Busy being the Chairman of the Conservatives.

‘Or are you guys just scared?’

‘This kind of vitriol is meant to frighten communities into line, not encourage them to participate in the political process.

‘Before Clive goes around throwing stones, why not fix up Labour’s house first? Jeremy Corbyn is hardly sin-free. And Clive would know because he nominated him.

‘I’m glad to be part of a party that promotes and believes in BAME talent and I will gladly celebrate if Labour is ever able to match our achievements.’

Mr Johnson has previously faced accusations of racism after he referred to ‘piccaninnies’ and ‘tribal warriors’ with ‘watermelon smiles’ in a 2002 newspaper column. 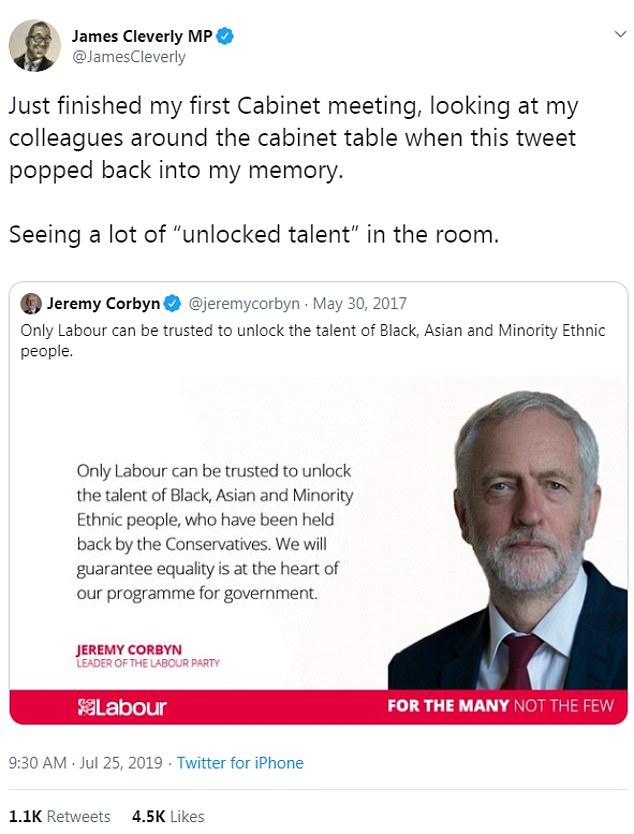 Mr Lewis sparked controversy in 2017 and was forced to apologise after he told an activist at an event held alongside Labour Party conference to ‘get on your knees b****’.

He admitted his language had been ‘offensive and unacceptable’ after facing a wave of condemnation from colleagues.

Footage of a Momentum event in Brighton showed Mr Lewis, often tipped as a rising star in the party, making the remark to a man on stage as the audience laughed.