Clive Palmer candidate could be Victorian senator thanks to Liberal preferences

Victoria could send a United Australia Party representative to parliament thanks to Liberal preferences, with Clive Palmer’s top Senate candidate, Ralph Babet, ahead in the race for the state’s sixth Senate spot.

The UAP gained a higher proportion of the votes in Queensland, but Victoria is likely to be the only state that could return a member of parliament from Clive Palmer’s party.

Babet, a real estate agent and the UAP’s No. 1 Senate candidate in Victoria, secured 4.3 per cent of the vote with almost 40 per cent counted, putting him in the lead for the final Senate spot. 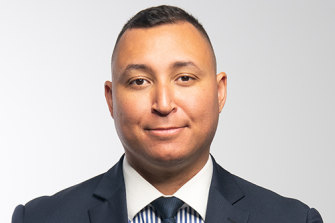 Ralph Babet runs a real estate agency with his brother, Matt, who also stood for the UAP in the seat of Bruce.

The Liberal Party preferenced the UAP second on its Victorian Senate how-to-vote card, and should the Liberals fail to gain three Senate quotas, its preferences could help elect Babet. A UAP spokesman declined to comment, saying the party was waiting for more results.

Despite an estimated $100 million spent by the mining magnate during the federal election, the UAP secured just 4.3 per cent of the national vote, a swing of 0.8 per cent. This translates to about $210 spent on each vote.

The UAP secured around 5.3 per cent of the vote in Queensland, higher than in Victoria, with 4.8 per cent. Its lowest votes were in the ACT and Tasmania. 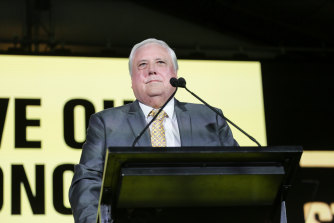 Mining billionaire Clive Palmer is unlikely to snag a Senate seat in his home state of Queensland, with the UAP trailing One Nation.Credit:Matt Dennien

Babet runs a real estate agency with his brother, Matt, who also stood for the UAP in the seat of Bruce in Melbourne’s eastern suburbs, where he recorded almost 9 per cent of the vote.

During the campaign, Ralph Babet campaigned against vaccine mandates and spoke about the “ever-growing power and authoritarianism of the government”, blaming the mainstream media and major parties for causing division.

On Christmas Day in 2014, he pleaded not guilty to a charge of criminal damage, which was withdrawn in 2015, and in 2017, a criminal damage charge was recorded with no conviction because Babet accepted responsibility without pleading guilty. He pleaded guilty to unlawful assault in 2018 before a magistrate dismissed the charge when he complied with an undertaking.

The UAP’s highest support came from a number of safe Labor seats in outer suburban areas of Melbourne and Sydney, mirroring the results of the 2019 election, where the UAP vote was the strongest in Labor seats.

In Holt, a Labor seat that covers Hampton Park, Cranbourne and Lynbrook in Melbourne’s outer southeast, the UAP secured a swing of 4 per cent. In Calwell, which includes Broadmeadows, Dallas and Craigieburn on the city’s northwest fringe, the UAP sat at 9 per cent on Sunday.

The party also recorded more than 8 per cent in the safe Labor seats of Bruce (Dandenong and Narre Warren in the east) and almost 9 per cent in Scullin (includes Thomastown, Lalor, Epping and Mill Park in the northern suburbs).

These were areas that were heavily affected by lockdowns and restrictions during the pandemic, which spurred the “freedom” protests that took place in Victoria last year.

Liberal Senator Jane Hume said on Saturday night that the Coalition had expected a bigger backlash against Daniel Andrews following the pandemic.

Consultant Kos Samaras, a former Labor assistant state secretary who now runs consulting firm RedBridge, said he wasn’t surprised to see high Palmer votes in safe Labor areas, with many of these areas also recording a high “minor alt-right vote, which is a combination of Palmer, One Nation and small independents out there in the outer suburbs”.

While Samaras noted that the UAP vote was still statistically very low, he said it shouldn’t be ignored by Labor, who needed to think about how the party represents and services “once-upon-a-time safe electorates”.

“Even before the pandemic, issues have existed in the outer suburbs of Melbourne that could be defined as safe Labor areas. These are issues associated with rapidly growing suburbs, poor infrastructure, and no support from either major parties.

“If Labor doesn’t actually address and start representing these people, the problem is only going to get worse.”

The party’s leader, Craig Kelly, who defected from the Liberals last year and has been touted in UAP advertising as Australia’s next prime minister, secured just 8 per cent of the primary vote in his seat of Hughes in Sydney’s south. It is expected to go to the Liberal Party’s Jenny Ware.

It was also looking unlikely Palmer would snag a Senate seat in his home state of Queensland, with the UAP trailing behind One Nation and Legalise Cannabis Australia on Sunday.