A cocktail bar which only accepts ‘mixed gender groups’ and asks same-sex groups to ‘meet management’ before their booking can be accepted has been slammed by equality law experts.

Lawyers say the venue could be breaching the Equality Act if its policy means LGBT groups are turned away because they make up single-sex parties.

Archer Street – which has bars in Soho and Clapham in London – markets itself as an exclusive cocktail lounge.

But the bar says it is currently only accepting mixed bookings of men and women as it unlocks following the easing of Government coronavirus rules.

It said: ‘Archer Street will only accept bookings of mixed gender groups. We do, on occasion, allow smaller groups of the same-sex, although you may be asked to come down to Archer Street to meet with management, before confirmation of your booking.’

In another part of the website, it adds: ‘Archer Street asks for an even split of gender for all bookings. On occasion we can make an exception, but this has to be authorised by Management.’ 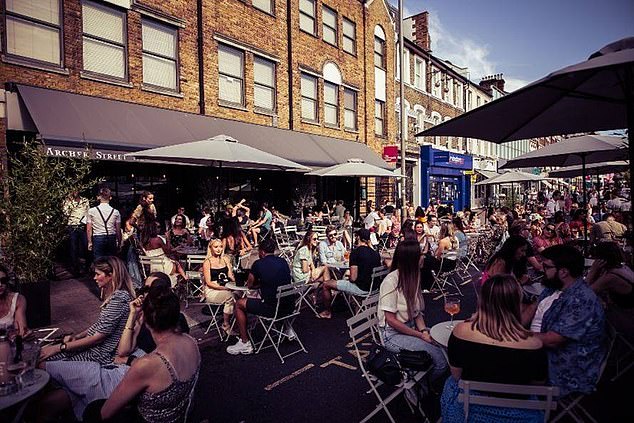 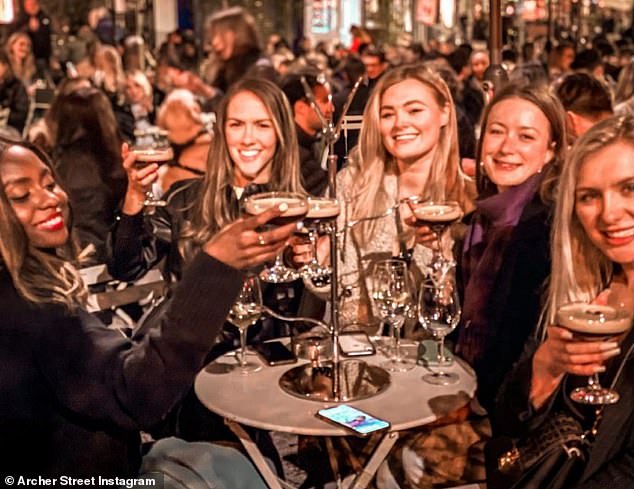 Despite the ban on same-sex parties, the venue posted this image of a group of girls drinking at one of their London bars

Some have suggested the rule is to keep stag and hen dos away from the venue, but this is covered explicitly in a separate rule.

Hannah Price took to Twitter to complain after her friend was turned down when trying to make a reservation.

She said: ‘My friend tried to book a table for five people at Archer Street in Clapham and was told they don’t take bookings for “same-sex groups”* What?

‘They also assumed genders based on the names she provided when booking.’

Legal experts said if the bar turned down single-sex bookings of LGBT people celebrating weddings or civil partnerships, this could be breaking equality law.

Prof Stephen Whittle, an equality law expert at Manchester Met University, said: ‘If a booking is for a group of men or women only for a party night, then a bar can refuse the booking if the bar has knowledge or experience of such groups wrecking the joint.

‘If they refuse a booking because it is to celebrate the wedding or civil partnership of a same-sex couple, or a couple where one or both partners is trans, then the refusal is almost certainly contrary to the Equality Act 2010.’

He added: ‘It is the “because” that matters.’ 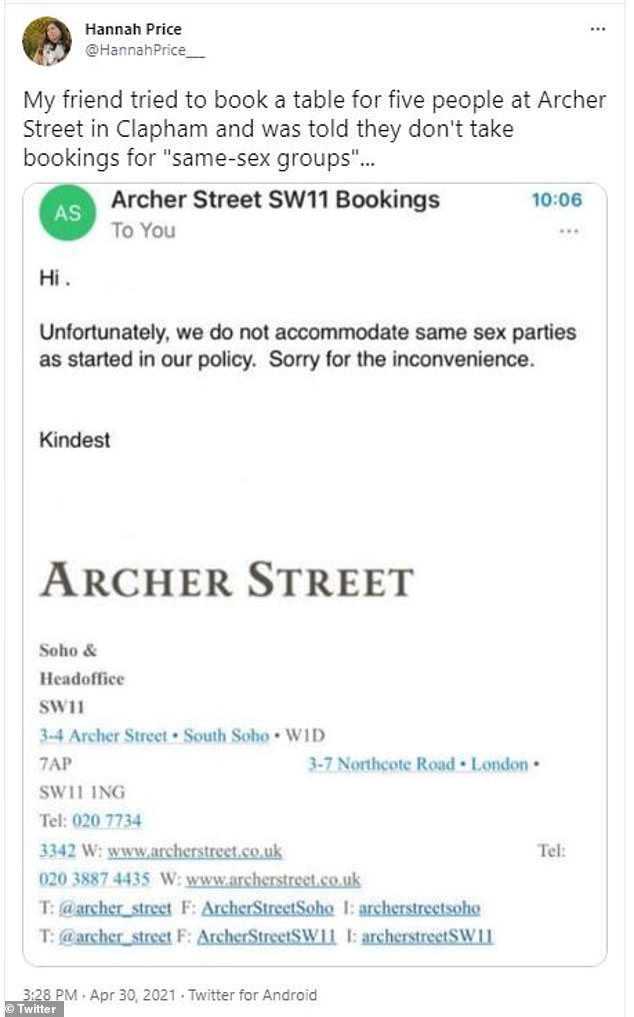 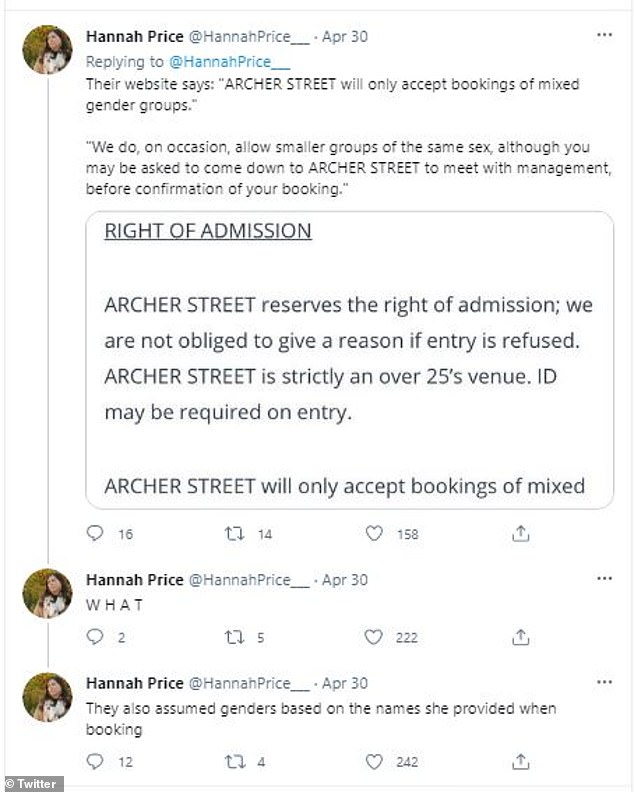 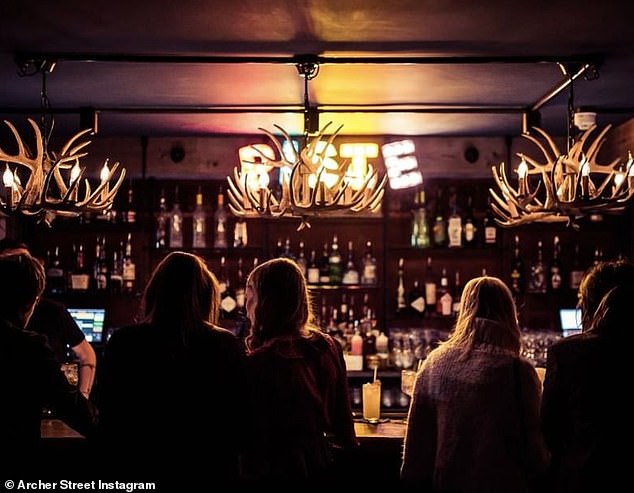 Archer Street describes itself as ‘the first and only exclusive Billecart-Salmon Champagne bar in the United Kingdom’. Pictured, inside one of the bars before covid restrictions

She said a case in 2016, when a hotel banned same-sex couples from sleeping in a double room together, was found as direct discrimination.

Ms Hamblin added: ‘The bar’s policy could also fall into indirect discrimination, which is a where a policy, criterion or practice (PCP) when applied to all, substantially disadvantages a group of people with a protected characteristic.

‘The PCP is the refusal to allow same-sex individuals to book at the restaurant.

‘The PCP would apply to all, in that I imagine the restaurants enforce this against same-sex individuals whether they are in a romantic relationship or not.

‘The protected characteristic is sexual orientation and there is a clear disadvantage in that they cannot go out for a meal with their partner.’

Some have suggested the rule is to keep stag and hen doos away from the venue, but this is covered explicitly in a separate rule 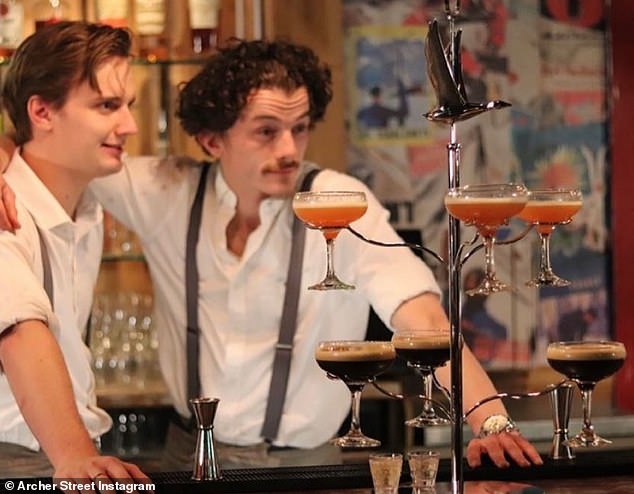 Archer Street describes itself as ‘the first and only exclusive Billecart-Salmon Champagne bar in the United Kingdom’.

Its website reads: ‘Archer Street Soho is the ideal destination for a great night out in London.

‘Crafted by some of the best mixologists in London, our bespoke cocktail menus are based on seasonal fresh produce and use only premium spirits for our guests to enjoy.’

Milan Vrućinić wrote: ‘Is this even legal? I totally understand that Archer Street can choose not to take stag/hen parties, but blank ban on same-sex group bookings?! It’s 2021, in the UK, they have HQ in Soho, and this just sounds so weird (and unlawful)!’

Richard Ellett added: ‘It’s not unheard of to refuse hen and stage parties but this is surely gross discrimination. I hope they get the negative publicity they deserve.’

Matt Dechaine said: ‘This is absurd and hugely discriminatory. What about groups of same-sex couples? I appreciate how stag/hen groups can be rowdy if that’s their concern but these blanket policies are just not on. Hopefully you’ll reconsider.’