Colleagues of Australian academic Sean Turnell will deliver a petition to the Myanmar embassy on Wednesday calling for him to be released from detention, as Australia’s former ambassador says the world is effectively powerless to stop the coup in the south-east Asian country.

Hundreds of government MPs, election commissioners, students, journalists and academics have been arrested by the Myanmar military in the past fortnight. Turnell, who is Aung San Suu Kyi’s economic advisor, remains the only foreigner detained by the military junta. 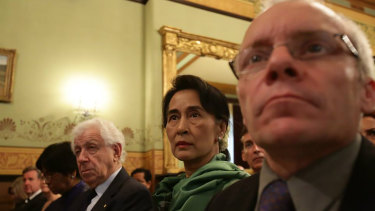 More than 350 colleagues and supporters of Dr Turnell, a professor of economics at Macquarie University, have signed the petition in the hope of diplomatic breakthrough.

“His credibility and ethics are exemplary,” the petition states. “His detention is unjustified. We call for his immediate release, without charge.”

Suu Kyi, the international democratic icon will face court on Wednesday for the first time since she was detained by the military on unsubstantiated claims of election fraud on February 1. The leader of the National League for Democracy, who spent 15 years under military house arrest prior to 2010, was charged for breaches of export and import laws after six banned walkie-talkie radios were found in a raid of her house in the capital Naypyitaw. 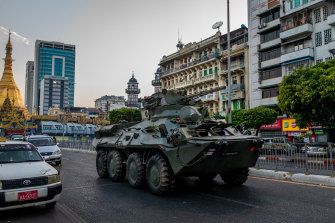 An armoured vehicle moves through Yangon on Sunday.Credit:Getty Images

Nicholas Coppel, who left Myanmar in 2019, said while the range of actions that are open to the rest of the world are limited, it was important for public statements to continue to provide moral support for pro-democracy leaders.

“There is not much assistance that much of the world can provide,” he said.

Dismissing suggestions that China was involved in the coup, Coppel said Beijing’s main foreign policy interest in Myanmar was the stability of the border region. He said Myanmar’s former leader Suu Kyi had courted Beijing through the Belt and Road Initiative, while the military had cancelled business deals, angering the Chinese Communist Party. 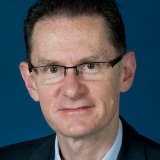 “It does not suggest China’s fingerprints on this, it’s an internal coup and it’s a simple as that.”

In his first public comments since the military takeover, Coppel told the Australian National University’s Myanmar Research Centre on Tuesday that three key factors would define how the coup continues: the condition of Suu Kyi, internal dissent within the military, and the stance of the Buddhist religious leadership. “This crisis has a long way to play out,” he said.

Thousands of protesters have taken to the streets in response to the coup by general Min Aung Hlaing, which has also forced the central bank chairman and attorney-general out of office. The wave of dissent has triggered volleys of rubber bullets and a shutdown of the internet. Doctors, engineers and garbage collectors went on strike on Monday despite armoured vehicles rolling into Sittwe, Myitkyina and Yangon.

ANU Myanmar expert Dr Nick Cheesman said while the military faced a far more connected protest movement than it did in the 1990s and early 2000s, the resistance may struggle to gain enough momentum to make a difference.

“A sceptical position would say that in head-to-head conflict between political power and violence, violence will win,” he said. “It is hard to see how ultimately these protests can succeed.”

The United Nations special envoy on Myanmar, Christine Schraner Burgener, on Monday spoke to Soe Win, the deputy leader of the country’s military. She warned the general that the world was “watching closely”. 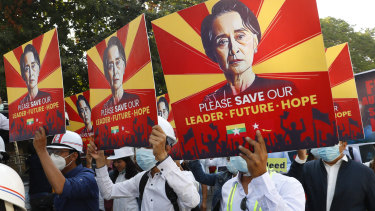 Engineers hold posters with an image of deposed Myanmar leader Aung San Suu Kyi as they hold an anti-coup protest march in Mandalay on Monday.Credit:AP

“Any form of heavy-handed response is likely to have severe consequences,” Burgener told Win according to UN spokesman Farhan Haq.

But western powers other than the United States have so far remained reluctant to impose further sanctions on the regime, fearful that economic punishment would push the country further towards Chinese financing.

Foreign Minister Marise Payne said she was “very concerned” about the developments of the last 10 days. The Australian Department of Defence was reviewing its training programs for the military, also known as the Tatmadaw, in the wake of the coup, but was also attempting to keep lines of engagement open with the regime amid fears of years of unrest.

“We have been clear in urging the military and the police to refrain from violence in response to those who are exercising their right to peaceful assembly, and we continue to do that,” she said.

Payne said Australia’s ambassador to Myanmar, Andrea Faulkner, spoke to Turnell over the weekend. She said Turnell was well, but this was a “very difficult environment”.

“He continues to be detained without charge,” she said. “So, our high level advocacy both in Yangon and, of course, through the Myanmar ambassador here in Canberra is to seek his immediate release.”