The Tory election campaign collapsed into further disarray today as a minister made a fulsome apology for a ‘doctored’ social media attack video.

A re-edited version of a Good Morning Britain interview with Sir Keir Starmer yesterday ran on Twitter and Facebook showing him struck dumb and unable to answer a question from Piers Morgan.

But the full exchange showed him answering the question immediately.

The row prompted Mr Morgan to tear furiously into Tory party chairman James Cleverly when he appeared on the programme this morning.

The presenter accused the Tories of creating a ‘re-edited version, a mash-up which you did yourselves, which completely changed the context’.

‘That is fake news. You have deliberately re-edited, as a party, the end of that exchange, to make it look like Sir Keir Starmer didn’t answer,’ Mr Morgan said. 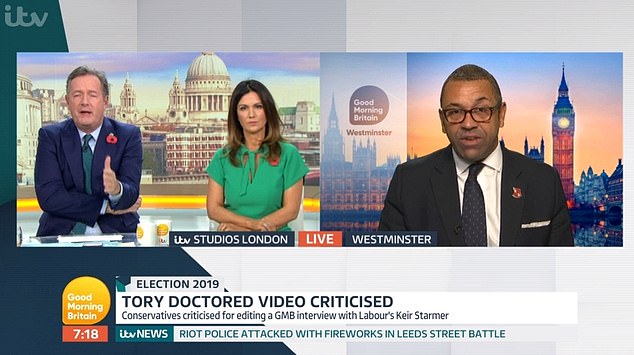 Mr Morgan accused the Tories of creating a ‘re-edited version, a mash-up which you did yourselves, which completely changed the context’ 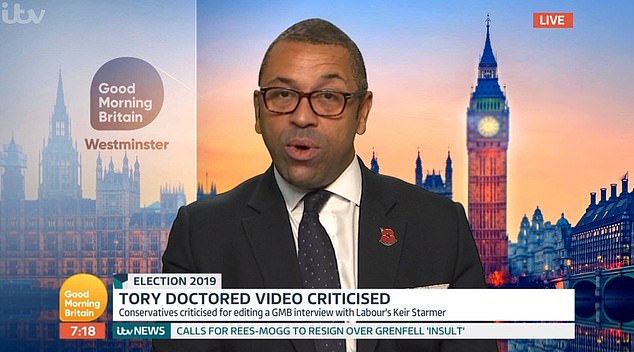 Mr Cleverly tried to suggest the party ‘didn’t have time to cover the whole of the interview’, to which Mr Morgan replied: ‘You had time to edit it’

‘In fact he answered immediately and fluently. It’s the purest definition of fake news.’

Mr Cleverly tried to suggest the party ‘didn’t have time to cover the whole of the interview’, to which Mr Morgan replied: ‘You had time to edit it.’

Last night Veterans Minister Johnny Mercer, who had retweeted the video, issued an apology and questioned why it had been altered.

He said: ‘It would appear this has inexplicably been doctored at the end. I apologise and will remove it.

‘The original interview was bad enough – I have no idea why this needed altering. I will call this out-whichever side does it, including my own. Sorry folks.’

Mr Cleverly told the BBC that Tory social media feeds had posted the interview in full and then followed it up with a ‘light-hearted’ video on Labour’s Brexit position.

‘What we also did, and this is not unique to us, is we did a light-hearted satirical video, obviously so with a comedy soundtrack, highlighting the Labour Party’s chaotic position on Brexit,’ he said.

Asked whether his party had ‘posted a lie’ online, he replied: ‘I disagree with your assessment of it.’

In a further mishap for Mr Cleverly this morning he was ’empty-chaired’ on Sky News after apparently being double-booked.

Kay Burley highlighted his absence from her breakfast show this morning, which is broadcast from Millbank in Westminster, where all the broadcasters have studios.

‘There is an empty chair here. It was supposed to be filled by the chairman of the Conservative Party,’ Ms Burley told viewers.

‘Where is he? He’s probably 15 feet away from where i’m standing, just at the moment.

‘I’ve been in to see him in the break, he said he wasn’t due to talk to us today, although they had said they would talk to us.’ 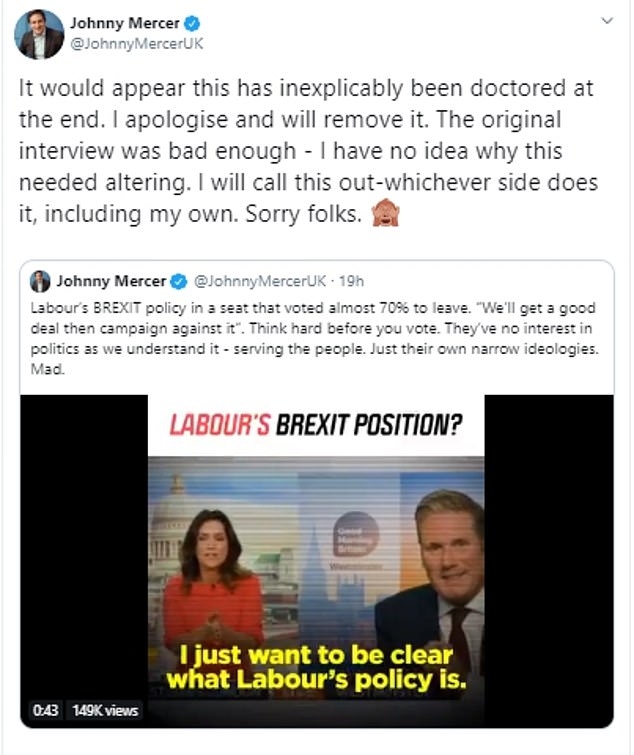 The Conservative Party was fighting to keep its campaign on track amid calls for Cabinet ministers to quit.

Boris Johnson, who is visiting Buckingham Palace for an audience with the Queen before announcing the start of the election drive in Downing Street, faces a first official day of campaigning marred by his party having to defend controversial remarks.

Commons Leader Jacob Rees-Mogg faced widespread criticism, including from Grenfell survivors and Jeremy Corbyn, after he said people are safer if they ‘just ignore what you’re told and leave’, while discussing London Fire Brigade’s ‘stay-put’ policy.

Rapper Stormzy called on Mr Rees-Mogg to resign, calling him a ‘piece of s***’, after the Tory MP suggested that Grenfell victims should have used ‘common sense’ and ignored fire service guidance not to leave the burning tower block.

Mr Rees-Mogg apologised for his remarks and said he intended to say he would also have listened to the LFB advice. 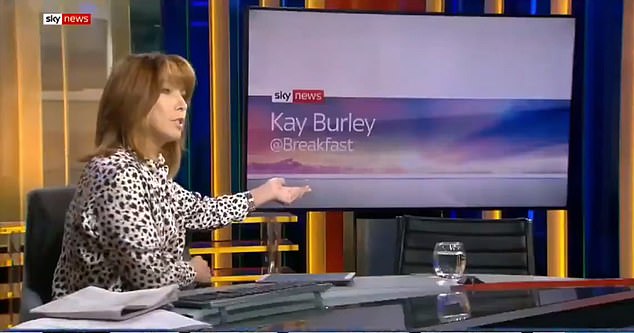 Kay Burley highlighted Mr Cleverly’s absence from her breakfast show this morning, which is broadcast from Millbank in Westminster, where all the broadcasters have studios

‘There is an empty chair here. It was supposed to be filled by the chairman of the Conservative Party,’ Ms Burley told viewers

Elsewhere, the shadow secretary of state for Wales, Christina Rees, accused Welsh Secretary Alun Cairns of ‘brazenly lying’ about his knowledge of an allegation that a Conservative candidate had sabotaged a rape trial, and called on him to resign.

Mr Cairns claims he had been unaware of former staff member Ross England’s role in the collapsed trial until after the story broke last week.

BBC Wales said it had obtained a leaked email sent to Mr Cairns which showed he had been made aware of the allegations as early as August last year.