Cohen’s lawyer Lanny Davis said in an interview that Cohen directed his former attorney, Stephen Ryan, to contact Trump’s representatives after they “dangled” the possibility of pardons “in their public statements”. Davis did not specify which public statements swayed Cohen, saying only that the outreach took place before federal law enforcement raided Cohen’s home and office in April 2018. 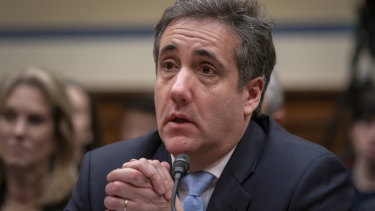 In his testimony to Congress, Michael Cohen said he had never sought a pardon from Donald Trump.Credit:AP

Reached late Wednesday, Giuliani said: “If Michael Cohen waives attorney-client privilege on this question, I’d be happy to say more, but he may not want to do that and have me do that.”

In a closed-door testimony to Congress held after the public session, Cohen offered new details. According to people familiar with the testimony, Giuliani was not the only lawyer with whom Cohen said he discussed pardons. Cohen told the House Intelligence Committee that he also spoke about a pardon with Trump’s attorney Jay Sekulow, according to four people familiar with his statements, who spoke on the condition of anonymity because they were not authorised to discuss the matter.

In a terse statement, Sekulow flatly denied Cohen’s allegation, calling it “not true” — and declining to elaborate further.

To date, the topic of Cohen and pardons has been mired in a finger-pointing, much of it playing out in private. Cohen has privately claimed that Trump’s representatives dangled the notion of a pardon, according to people familiar with the discussions, while others say it was Cohen’s former representatives who broached the subject with Trump’s legal team.

Cohen made other statements during the public Oversight hearing that have since been challenged.

For instance, he said he never wanted a job in the White House and therefore was not motivated to lie about the President due to disapoointment at not securing one. Trump's son, Eric, and several other reporters said that it was widely known that Cohen wanted a White House job, preferably chief of staff.

Also in his testimony, Cohen accused Sekulow of making changes to the statements he was preparing to make before the House and Senate Intelligence committees in 2017 concerning when during the presidential campaign Trump abandoned a major real estate deal in Moscow. Cohen pleaded guilty last year to lying to Congress about the project’s timeline, and he is scheduled to begin a three-year prison sentence in May for that and other financial crimes.

The timeline reflected in Cohen’s testimony was significant because if Trump continued to pursue his Moscow tower project until at least June of 2016, instead of January of that year, as Cohen originally – and falsely – told legislators, it means he did so after it was clear Trump had won enough delegates to secure the Republican nomination for the presidency.

On Wednesday, Cohen gave the House Intelligence Committee documents that purportedly illustrate how the President’s lawyers edited his 2017 statements to Congress, according to people familiar with the matter. The committee has not made those documents public.

Disputes about the veracity of Cohen’s claims are fuelling a political fight over whether politicians should take Cohen at his word. While Democrats have questioned what incentive that Cohen, who is heading to prison, would have to lie to Congress now, Republicans have pointed to Cohen’s guilty plea as proof he can’t be trusted to deliver honest testimony.

With respect to the pardon discussions, the stakes are high for both sides. If Trump’s representatives sought a bargain with Cohen to gain assurances not to cooperate with prosecutors, it would raise questions about whether the intent was to obstruct justice. Were Cohen to intentionally mislead Congress, a crime to which he has already pleaded guilty, it could open him to additional prosecution and the prospect of a longer prison sentence.

As politicians split along political lines over Cohen, they are turning on each other. In recent days, Republican leaders have questioned not only Cohen’s integrity but also that of House Intelligence Committee Chairman Adam Schiff, a Democrat.

This week, Republican House Minority Leader Kevin McCarthy suggested on Fox News that Schiff had coached Cohen through his testimony, asking whether he had tried to “tamper” or “direct” Cohen to answer certain questions in a certain way and urging Schiff to recuse himself from the investigation.

On Wednesday, intelligence panel member Michael Turner, a Republican, sent a letter to Cohen, asking him to disclose the number and nature of his contacts with Schiff, and saying that those contacts raised questions about “witness tampering, obstruction of justice, or collusion”.

Together, these sessions have opened several avenues of inquiry for the six House panels looking into allegations of wrongdoing in Trump’s campaign and presidency.