New York: The numbers of new COVID-19 infections are climbing at a staggering pace that seems to only be picking up speed. On Saturday, just six days after reporting that the number of people in the United States to contract the virus had reached 11 million, researchers from Johns Hopkins University reported the total had reached the 12 million mark.

A majority of Californians are now under a nighttime curfew as surging coronavirus cases threaten to swamp health care systems, and the state's largest county warned that an even more drastic lockdown could be imminent. 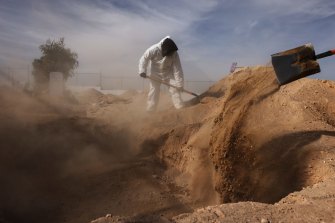 The newest restrictions require people to stay home from 10pm to 5am unless they are responding to an emergency, shopping for groceries, picking up takeaway or walking their dogs. The month-long curfew could be extended if rapidly worsening trends don’t improve.

Authorities say the focus is on keeping people from social mixing and drinking — the kinds of activities that are blamed for causing COVID-19 infections to soar after dipping only a few months ago.

A spokesman for the younger Trump says he received the positive test result earlier this week, has no symptoms and has been quarantining and following the recommended medical guidelines.

Singapore and Hong Kong have postponed the start of an air travel bubble meant to boost tourism for both cities, citing a spike in infections in the Chinese territory on Saturday as a “sober reminder” of risks to public health. 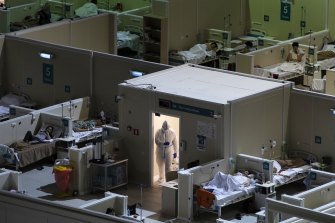 A medical worker wearing protective gear enters the treatment hall of a temporary hospital for coronavirus patients in the Krylatskoye Ice Palace in Moscow, Russia, where the health system has been overwhelmed by the coronavirus.Credit:AP

The travel bubble, originally slated to begin on Sunday, will be delayed by at least two weeks, Hong Kong’s minister of commerce and economic development, Edward Yau, said at a news conference.

The arrangement is meant to allow travellers between the two cities to enter without quarantine as long as they complete coronavirus tests before and after arriving at their destinations, and fly on designated flights.

“For any scheme to be successful, they must fulfil the condition of securing public health, and also make sure that both sides would be comfortable and feel safe about the scheme,” Yau said. “In light of the situation in Hong Kong, I think it’s the responsible way to put this back for a while, and then sort of relaunch it at a suitable juncture.”

Under the initial agreement, the travel bubble was to be suspended if the number of untraceable local infections in either Singapore or Hong Kong exceeded five on a seven-day moving average. The current average in Hong Kong is nearly four, prompting Yau and Singapore's transport minister, Ong Ye Kung, to postpone the inaugural flight.

In Japan, the daily tally of reported COVID-19 cases hit a record for the fourth day in a row, with 2508 people confirmed infected, the health ministry said on Sunday.

Japan has had fewer than 2000 coronavirus-related deaths so far, avoiding the toll of the harder hit nations. But fears are growing about another surge. A flurry of criticism has erupted, from opposition legislators and the public, slamming the government as having acted too slowly in halting its “GoTo” campaign, which encouraged travel and dining out with discounts.

South Korea reported more than 300 new coronavirus cases for a fifth straight day on Sunday, as officials warned that stricter rules could be imposed if the trend continues to threaten the highly populated capital of Seoul and surrounding areas.

In recent days infection numbers have reached a level not seen since August. On Saturday, health authorities said the country is at "a critical juncture" and could be facing a large nationwide outbreak that surpasses two earlier waves of infections, if it fails to block the current spread.

Iran has shuttered businesses and curtailed travel between its major cities, including the capital of Tehran.

The Iranian Health Ministry says the daily deaths have risen above 430 in the past five days, bringing the death toll past 44,000. The total number of confirmed cases has risen past 840,000.

The new restrictions include Iran’s major cities and will last two weeks but can be automatically extended.

Mexico's health ministry reported on Saturday 6719 additional cases of the novel coronavirus and 550 more deaths in the country, bringing the official number of cases to 1,032,688 and the death toll to 101,373.

Russia reported new daily highs in the number of coronavirus infections and deaths on Saturday.

The national coronavirus taskforce says 24,822 new cases were recorded over the past day, the fourth time in a week that a new high has been tallied. It says a record 467 people died of COVID-19.

In Belgrade, Serbia, mourners gathered to pay respects to a Serbian Orthodox Church cleric who died of COVID-19 just three weeks after he presided over the funeral of another cleric who died of the virus. In both cases, many of the mourners did not wear masks or practice social distancing.

Italy registered 34,767 new coronavirus infections in 24 hours, the health ministry said on Saturday, slightly down from 37,242 the day before.

The ministry also reported 692 COVID-19-related deaths after 699 on Friday.