Effectiveness of Pfizer and Moderna’s Covid vaccines at stopping hospital admissions drops to as low as 75% against Delta variant with elderly people most at risk, US health chiefs say

Pfizer and Moderna’s Covid vaccines are already starting to become less effective at preventing hospitalisations, US health chiefs have said.

Protection against hospital admission from the coronavirus drops to as low as 75 per cent in under a year for some vulnerable people, data suggests.

US Centers for Disease Control and Prevention (CDC) vaccine advisers said efficacy rates fell close to that threshold last month in over-75s, who are most vulnerable to the disease.

But Dr Sara Oliver, a viral diseases expert at the CDC, insisted all vaccines ‘remain effective in preventing hospitalization and severe disease’.

Most people still enjoy protection much closer to the 95 per cent figure touted when the mRNA vaccines were first doled out in late 2020.

The data didn’t look at patients with weakened immune systems but studies suggest a large portion of them have low immunity after two shots.

The CDC and the Food and Drug Administration (FDA) have already green-lit booster doses for certain immunocompromised people, which will be rolled out this month. But officials in the US are still mulling whether a mass roll-out is necessary.

Britain’s top-up programme is due to start on next week but No10’s vaccine advisory board is yet to announce who will be eligible for third doses.

A source close to discussions told MailOnline there was still ‘much debate’ among experts on the UK panel about whether all elderly people even need them.

Protection against hospital admission from the virus drops to as low as 75 per cent in under a year in some vulnerable people, from 95 per cent shortly after vaccination. Pfizer’s (blue could be as low as 75% in over-75s) while Moderna’s is around 80% in that age group

Effectiveness of the Moderna (yellow) and Pfizer (blue) COVID-19 vaccines against infection began to drop in June and July as the ‘Delta’ variant became more prevalent. Moderna had an effectiveness of 76%, while Pfizer’s vaccine was 42% effective

It remains unclear whether the drop in vaccine effectiveness against hospitalization is because jab immunity wanes over time, or if Delta has blunted their powers.

In some long-term care home residents, who are frail, elderly and have severe health conditions, protection against severe disease was only about 50 per cent.

The CDC’s Advisory Committee on Immunization Practices (ACIP) met on Monday to review the new data — which looked at vaccine efficacy figures in July — and discuss the potential need for booster shots in the future.

Dr Oliver told CNN: ‘Regardless of the vaccine evaluated, all vaccines remain effective in preventing hospitalization and severe disease.

‘But they may be less effective in preventing infection and mild illness recently.

‘These reasons for lower effectiveness likely include both waning over time and the Delta variant.’

She added: ‘Preliminary VE against hospitalization in adults 75 years of age and older… decreased in July but still remained over 80 per cent.’

US officials announced earlier this month that they planned to make boosters available from September 20, but it is pending approval from the CDC and FDA.

The CDC study also confirmed that the mRNA vaccines could be less that 50 per cent effective at stopping infections. 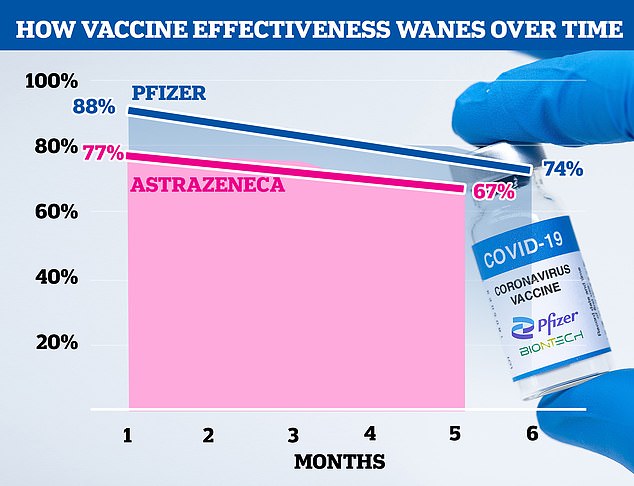 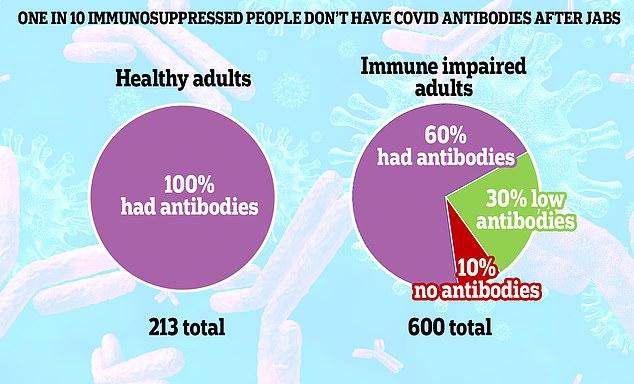 A study by the Universities of Glasgow and Birmingham measured antibody levels in 600 immunosuppressed people and compared them to healthy volunteers. About one in 10 in the vulnerable group failed to generate any detectable Covid antibodies four weeks after their second dose of Pfizer or AstraZeneca. A further 30 per cent generated a significantly lower antibody response than healthy people, according to the study published as a pre-print in The Lancet

The head of the World Health Organization (WHO) on Monday called for a two-month moratorium on administering booster shots of COVID-19 vaccines.

Tedros Adhanom Ghebreyesus, WHO director-general, told reporters in Budapest, Hungary, that the pause is necessary to reduce global vaccine inequality.

He also said he was ‘really disappointed’ with the scope of vaccine donations worldwide.

As many countries struggle to provide first and second doses to more than small fractions of their populations, some wealthier countries like the U.S., Hungary and Israel have rolled out plans to distribute additional vaccine doses.

Tedros called on countries offering third vaccine doses ‘to share what can be used for boosters with other countries so [they] can increase their first and second vaccination coverage.’

In early August, Hungary became the first country in the 27-member European Union to allow residents to sign up for a third dose, and more than 187,000 people have received a booster so far, according to government statistics.

Germany and France have both also announced plans to do the same in the near future.

Last week, U.S. health officials announced plans to dispense COVID-19 booster shots to all Americans in an effort to shore up protection against a surge in cases attributed to the delta variant and signs that the vaccines´ effectiveness is slipping.

Vaccine booster doses will be available in the U.S. starting on September 20, and Americans will be eligible for them eight months after they received their second shot.

Yet the U.N. health agency has repeatedly called for rich nations to do more to help improve access to vaccines in the developing world.

On Monday, Tedros said that of the 4.8 billion vaccine doses delivered to date globally, 75 percent have gone to only 10 countries while vaccine coverage in Africa is at less than 2 percent.

‘The virus will get the chance to circulate in countries with low vaccination coverage, and the delta variant could evolve to become more virulent, a nd at the same time more potent variants could also emerge,’ he added.

Israel is already in the middle of a mass booster vaccine programme which will see everyone over the age of 30 given a third top-up dose.

Health officials there claim there are early signs the scheme has already started to bring its unprecedented fourth wave under control.

In the UK, the Joint Committee on Vaccination and Immunisation (JCVI) is still yet to sign off on a booster rollout despite the NHS being due to start administering the doses from next Monday.

The group is expected to recommend them for people with severely weakened immune systems, which may only include several hundred thousand Britons.

Professor Paul Hunter, an expert in medicine at the University of East Anglia in England, last night called for over-80s and immunocompromised people to get their shots ‘pretty soon’.

He said he saw no reason ‘whatsoever’ why it had taken the JCVI so long to sign off on doses for those groups but admitted a mass booster rollout wasn’t necessary.

There are fears that a ‘big bang’ in cases when English schools go back this week could spark a rise in hospital admissions and deaths, particularly among the most vulnerable.

The NHS has been told to gear up to start the autumn immunisation programme, which will operate alongside a mass flu jab campaign, by September 6.

But the JCVI is still dithering over exactly who should be eligible for the third injections.

Professor Hunter said that people who had had the vaccine but did not respond as well ‘need to be boosted soon’.

‘I would also add over-80s to that category.’

Professor Hunter added: ‘The evidence is that these people won’t have responded that well to vaccine.

‘And it’s not because the vaccine has waned, is because chances are they did not respond that well the first time around.’

He said: ‘When you look at the rest of the population, what we’re seeing is that protection against infection is declining.

‘But protection against severe disease is not at the moment, although ultimately it will – though hopefully not for a number of years.

‘And so that the value of boosting people who aren’t going to get severely ill is debatable.’

He also suggested that he was not in favour of vaccinating healthy under-16s, but said he would follow whatever advice the JCVI gives.

Protection after two shots of Pfizer decreased from 88 per cent at one month to 74 per cent at six months and for AstraZeneca, effectiveness dropped from 77 per cent to 67 per cent.

But protection against severe illness and death is thought to last much longer, which is why the hospital and fatality numbers have remained low as cases have soared.

A separate study last week found that two doses of either AZ of Pfizer’s vaccine do not work as well in up to 40 per cent of those who are immunosuppressed,

Experts are yet to confirm the details of the autumn booster rollout, but a source close to the discussions told MailOnline last week: ‘We’re only talking about a few hundred thousand people in the first phase.’

There are 3.7million people across England who are classified as ‘clinically extremely vulnerable’, with diseases such as cancer, vasculitis and organ transplant patients. Half a million are thought to be immunosuppressed.