A decision to allow an extra 500 people to attend the Cox Plate racing carnival this weekend has been reversed by the Victorian government after a political and online backlash.

The backdown, issued by Racing Minister Martin Pakula, came five hours after his office announced up to 1000 owners and connections would be allowed to attend Moonee Valley for the running of the Manikato Stakes on Friday night and the Cox Plate on Saturday. 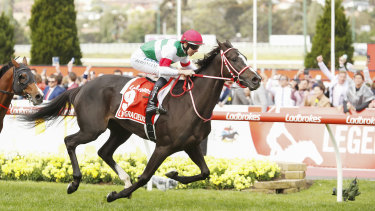 The extra numbers were to come on top of jockeys, essential racing staff and the media, bringing the number at the carnival over the two days to 1250 per meet. The course can host 38,000 people in regular times.

The government and host venue Moonee Valley Racetrack insisted that the allowance of the extra spectators was under advice issued by Chief Health Officer Brett Sutton.

The decision quickly drew the ire of opposition and crossbench MPs and others on social media on Tuesday night.

Channel Nine reporter Mark Santomartino shared his outrage at the announcement in reference to his grandmother who recently died from COVID-19.

"816 families couldn't have more than 10 people at funerals for loved ones killed by Covid during Melbourne's (preventable) second wave – including my Nonna," he wrote on Tuesday evening.

"Maybe we should have buried them at Moonee Valley."

Liberal MP for Brighton, James Newbury, had also issued a tweet calling the announcement a "two-fingered salute" to Victorians.

Acting Victorian Greens leader Ellen Sandell labelled the decicion "a real kick in the guts to Victorians who have done an amazing job and lived with nearly four months of harsh restrictions, unable to see their family and friends, while wealthy race-horse owners are given this special exemption".

Upper House MP for the Animal Justice Party Andy Meddick said in a statement that it "seems there is one rule for Victorians, and another rule for the racing industry".

"Like many others, I have supported the measures put in place to stop the spread of coronavirus. I even voted for them. But I didn't do it so horse racing could be prioritised before everything else," he said.

"I’ve always said when animals and gambling are mixed – it’s the animals who lose. But with this announcement, Victorians have too."

In a late night tweet, Mr Pakula apologised to the public for "any upset" and said the decision to allow some owners on course "was motivated only by respect for the occasion & [sic] a desire to mark a small step on the path to reopening".

"It was a mistake, given that other restrictions remain in place, and we've heard the community feedback," he said in the tweet.

Mr Pakula said he had spoken with the Moonee Valley Racing Club on Tuesday evening to reverse the decision.

"Owners won't return to the track until we reach the next stage of the easing of restrictions."

Moonee Valley Racing Club CEO Michael Browell said the club was disappointed by the reversal, but would "accept the umpire's decision on this one".

"In light of the feedback received from the broader community we can understand, and we respect the decision made this evening by Martin Pakula and the government."

He said the COVID-safe plan for the event has been "painstakingly" prepared with the Victorian Health Department, but said he could understand anger from parts of the public about allowing loosened restrictions for racing events before Victorians could more easily reunite with loved ones.

"We do appreciate the community is under very tough restrictions," he said.

Mr Browell said it was likely owners would be allowed at racemeets from next week instead.

"There's every chance come Monday the 26th of October, if the restrictions are wound back, it could be that it’s [then] perfectly acceptable".

The Victorian horse racing industry has continued to operate throughout the pandemic, albeit with restrictions and no crowds.

The slated change would have brought metropolitan racetracks into line with regional Victoria, where owners were able to return to meetings earlier this month.

The saga came after Mr Andrews firmly reiterated on Tuesday that social restrictions would not be wound back before the AFL grand final on Saturday might, after the Cox Plate during the day.

"We've been very clear that we want to look at numbers as they unfold this week," he told reporters.

"I'll stand here on Sunday and hopefully be able to confirm for Victorians that when it comes to retail, pubs, restaurants, cafes, bars – as well as a number of other settings – that we can have what's been termed 'a dark opening' for, say, the first one or two days of next week and then we can be up and running from then.

"It's not appropriate for us to try and bring that forward."