Cuba, whose biotech sector has exported vaccines for decades, has five vaccine candidates in clinical trials, of which two – Soberana 2 and Abdala – are in late phase trials.

“In a few weeks we should have the results for the efficacy with three doses which we expect will be superior,” said Vicente Vérez​, director of the state-run Finlay Vaccine Institute, which developed Soberana 2 on Sunday AEST (Saturday Cuba time). 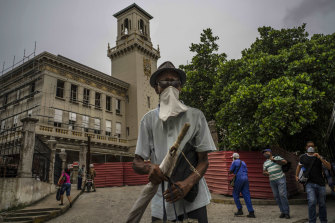 A pedestrian wearing a makeshift face mask amid the new coronavirus pandemic, walks past the Central Railway Station, in Havana, Cuba.Credit:AP

The news comes as the Caribbean’s largest island is facing its worst outbreak since the start of the pandemic in the wake of the arrival of more contagious variants, setting new records of daily coronavirus cases.

The Communist-run country has opted not to import foreign vaccines but rather to rely on its own. Experts say it is a risky bet but if it pays off, Cuba could burnish its scientific reputation, generate much-needed hard currency through exports and strengthen the vaccination drive worldwide.

“We know our government has not been able to provide this project all the funding it required, and nonetheless this is a result of global standing,” President Miguel Diaz-Canel said at the presentation of the results on state-run television.

Several countries from Argentina and Jamaica to Mexico and Venezuela have expressed an interest in buying Cuba’s vaccines. Iran started producing Soberana 2 earlier this year as part of late-phase clinical trials.

Cuba’s authorities have started administering the experimental vaccines en masse as part of “intervention studies” they hope will slow the spread of the virus.

Daily cases have halved in the capital since the start of this vaccination campaign, according to official data, although that may also be due to stricter lockdown measures.

Cuba also faces the challenge of a lack of syringes, reports the Miami Herald. Trump-era sanctions made it harder for the island to buy syringes from major manufacturers, which are already swamped with orders from bigger, richer countries.

When it became clear the island wouldn’t manage on its own, aid organisations in the US and Europe sprang into action. They launched campaigns to collect donations to buy syringes and have them shipped to the island to help narrow a deficit of as many as 25 million syringes.

The response in just little over a month has been “phenomenal,” according to Global Health Partners, a New York-based NGO that’s leading the Saving Lives campaign. Others in Spain, Italy and Latin American nations like Argentina and Honduras have also contributed. Cubans living abroad launched campaigns in cities all over the world, and in Miami a caravan against the US embargo last month also collected local donations.