Victoria’s independent infrastructure adviser has called for lower public transport fares, amid warnings there is no longer any space for new roads near the city. 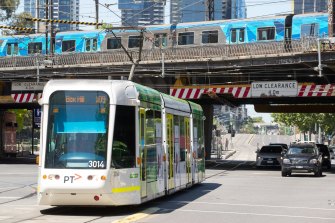 That includes a plan to permanently cut public transport fares during non-peak periods.

“If we offered off-peak fares for public transport, what we know that does in the modelling that Infrastructure Victoria has undertaken, is that it reduces the peaks of demand and spreads that out across the day,” Dr Spear told Tuesday’s summit. “It also increases the number of people who go onto public transport, reducing pressure on our roads.”

Infrastructure Victoria has found that about 70 per cent of peak bus services are running at less than a third of their capacity.

Despite this, fares for these bus services are the same as for long distance train commutes during peak hour. The price for a metropolitan, zone 1 and 2 fare is $4.50 for a two-hour ticket regardless of mode, distance, or trip purpose.

Dr Spear suggested Melbourne should consider following the lead of London and Sydney, where fares are charged based on the mode of transport and off-peak discounts are offered.

“It’s also very socially progressive because our modelling shows that actually, the people who would benefit the most are those who are less well-off,” he said.

His plea came as City of Melbourne Lord Mayor Sally Capp warned Melbourne could not build more roads “unless you want to see us do double-decker roads”.

“We really literally cannot build more road space,” Cr Capp told the summit. “So we are at capacity on cars.” 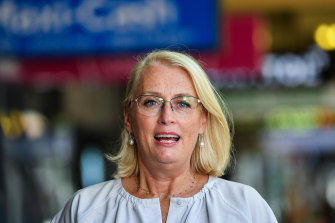 Melbourne Lord Mayor Sally Capp says the city has no room for any new roads.Credit:Joe Armao

Cr Capp warned car usage had increased, with people continuing to avoid public transport due to the pandemic.

“As we’ve come out of COVID, people are concerned about public transport, [but] we’re expecting that to settle down,” Cr Capp said. “We’re waiting for those public transport numbers to rise, but we really do need to be sensible about where and how we can best move people around the city.”

Victoria has a particularly busy infrastructure agenda. The government currently has about $38 billion worth of infrastructure cash tied up in just three projects – the Metro Tunnel, the West Gate Tunnel and the North East Link.

The Andrews Government is also ramping up plans for its pet project, the Suburban Rail Loop, a massive 90-kilometre orbital rail system that would run between Cheltenham and Werribee.

The project, to be delivered in three stages, is eye-wateringly expensive. According to the business case, the first section alone, SRL East, connecting Cheltenham to Box Hill, will cost as much as $34.5 billion.

The federal government has criticised the project and refused to stump up the $11 billion Victoria wants for the first stage.

Federal Infrastructure Minister Paul Fletcher last week told The Age the Commonwealth did not believe the project stacked up, as the costs were not matched by benefits.

State Transport Infrastructure Minister Jacinta Allan defended the project, telling the summit it was one of the most comprehensive infrastructure projects Victoria had seen, with detailed strategic and demographic assessments and two years spent on the business case.

Ms Allan said Melbourne would grow to a city of 9 million people by 2056, requiring the transport network to support an extra 11.8 million daily trips by passengers and an 80 per cent increase in private vehicle trips, meaning an extra 19 million extra car trips a day on the road network.

But the project is not included in detail in Infrastructure Victoria’s 30-year plan.

That plan proposes reconfiguring the City Loop with two new tunnels (one from North Melbourne the other from Richmond), further electrifying rail services in Melbourne’s west, upgrading the outer metropolitan road and rail corridor, particularly to improve freight productivity, and using more smart technology to better manage the roads.