Czechs head to the polls to elect next president

Incumbent Milos Zeman seen as front runner in field of nine candidates vying for a spot in a runoff later this month. 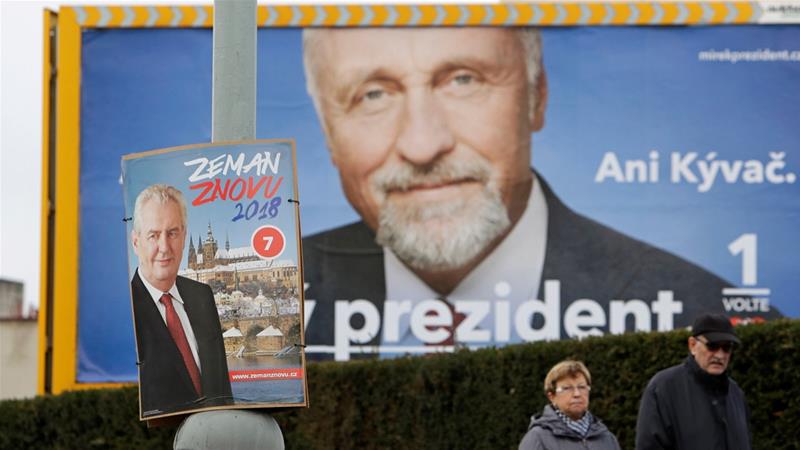 Prague – Three months after the election of the populist Eurosceptic and billionaire Andrej Babis as prime minister, Czechs will once again head to the polls on Friday and Saturday to elect a new president.

The favourite in the field of nine candidates vying for a spot in the election runoff later this month is the outspoken incumbent, President Milos Zeman, who at 73 has watched his country become more politically divided during his five-year tenure.

As a member of an increasingly right-wing regional alliance of Central European nations, named the Visegrad Group, that includes Hungary, Poland and Slovakia, the Czech Republic stands at an ideological crossroads with the rise of the country’s xenophobic far right, which rose to parliament in October’s legislative elections.

Zeman has been a vocal opponent of Muslim integration and is seen as sympathetic to authoritarian regimes, while also becoming one of the Kremlin’s most dependable allies in Europe.

They are views worrying many Czechs, who fear that their country may be backsliding from the democratic system they fought so fervently to achieve during the 1989 Velvet Revolution, which ended four decades under communism.

“In terms of a possible change in terms of a political movement, this is certainly the most important presidential election [in recent history].

“We are in a situation where if everything goes badly we could be faced with regime change, and though not another dictatorship, we could still perhaps become an illiberal democracy,” said political analyst Jiri Pehe, director of New York University in Prague.

“It could indicate the end of the first democratic republic and the onset of the second republic.”

Since the split of Czechoslovakia 25 years ago, the presidency has become a somewhat ceremonial position with a limited but not insignificant scope of responsibilities that includes appointing high-ranking government positions and meeting foreign heads of state.

The president is also expected to advance the country’s political trajectory by toeing the line of policies of the elected parliament. That has not been Zeman’s way.

In one example in October, then Prime Minister Bohuslav Sobotka accused Zeman of interfering in Czech foreign affairs and contradicting the government when he repeated his stance against EU sanctions on Russia over the Ukraine crisis while defending Russia’s annexation of the Crimean peninsula as irreversible.

Zeman’s speech “was in sharp contradiction of our foreign policy and the president had no mandate to do it,” Sobotka said at the time.

What is at stake?

Capitalising on growing disdain for the country’s dysfunctional government in the democratic era, Prime Minister Babis has promised to consolidate the role of government in favour of a stronger executive, drawing strong criticism from his opponents.

On Wednesday, Zeman pledged to stand by the caretaker prime minister even though he currently does not have enough support to win a vote of confidence from parliament.

With President Zeman all but declaring for Babis and no signs that the latter would be able to form a government before his term expires in early March, a new president may find himself in the position of calling for snap elections if Zeman has not already appointed him prime minister.

“If Babis is not yet appointed but is informally searching for support for his gov’t by that time, a new president could simply stop it, so the timing of these actions will be really important in this whole thing,” said Pehe.

A struggle for Czech identity?

For many Czechs, the stakes are much higher. The election will serve as a barometer of the struggle for an identity for a nation that has increasingly moved away from progressive European integration and politics and towards nativism.

Standing against the traditional pro-western political establishment that has ruled in the Czech Republic in the early 1990s, Zeman has repeatedly shunned EU refugee quotas and lent his support to Tomio Okamura, the anti-Islamic, anti-EU leader of the Freedom and Direct Democracy party (SPD) that came to power in October.

“Ever since the beginning of our statehood a thousand years ago, the Czechs have belonged to the European West. There can be no ideological division on this question, and there can be no ideological division in questions such as human rights and the checks and balances of a mature liberal democracy,” said Michal Horacek, a music producer, founder of one of the country’s largest betting companies and independent presidential candidate.

Who else is running?

Elections in the Czech Republic always tend to feature a cast of surreal characters who would not be out of place in a Kafka novel. In addition to Zeman – a heavy smoker and proud drinker – is Czech singer Petr Hannig and former prime minister Mirek Topolanek, who in 2009 was famously photographed naked with topless women at one of former Italian Prime Minister Silvio Berlusconi’s villas.

The most serious challengers to the incumbent though are the pro-EU left of centre Horacek and the 68-year-old centrist and former Czech Academy of Sciences chairman, Jiri Drahos.

“Zeman’s appeal is connected not only with strong anti-immigrant attacks but also with some kind of Euroscepticism. If Mr Drahos wins, the president’s image will be different because Drahos is intellectual oriented with no radical vision,” Lubomir Kopecek, a political analyst at Masaryk University in Brno, told Al Jazeera.

If Zeman fails to win 50 percent of the vote required for an outright victory in this weekend’s election – which is expected – then two candidates will compete in a runoff scheduled for later this month.

Some local polls see Zeman narrowly beat Drahos in a runoff, while Czech Television released a poll on Monday that has Drahos edging the president with 48.5 percent of the vote to Zeman’s 44 percent. According to that same poll, Zeman is likely to receive 42.5 percent in the first round to Drahos’ 27.5 percent.

“It’s just too early to tell what will happen,” said Pehe.