Daily coronavirus cases in the US tops 52,000 for the first time

Number of new daily coronavirus cases in the US tops 52,000 for the first time after eight states hit record highs for new infections and second lockdowns loom across the country

The US has seen a record 52,000 new COVID-19 cases within 24 hours on Wednesday, according to data from Johns Hopkins University.

The surge marks a new one-day record of infections as states across the country reopen.

The daily coronavirus case numbers have remained around the 40,000 mark in recent days. The news comes as more than 44,000 new cases of COVID-19 were confirmed in the US on Tuesday.

Adding to the rise in cases, hospitalizations for COVID-19, the contagious respiratory disease that first emerged in China, are also increasing in Houston, Texas and Phoenix, Arizona. 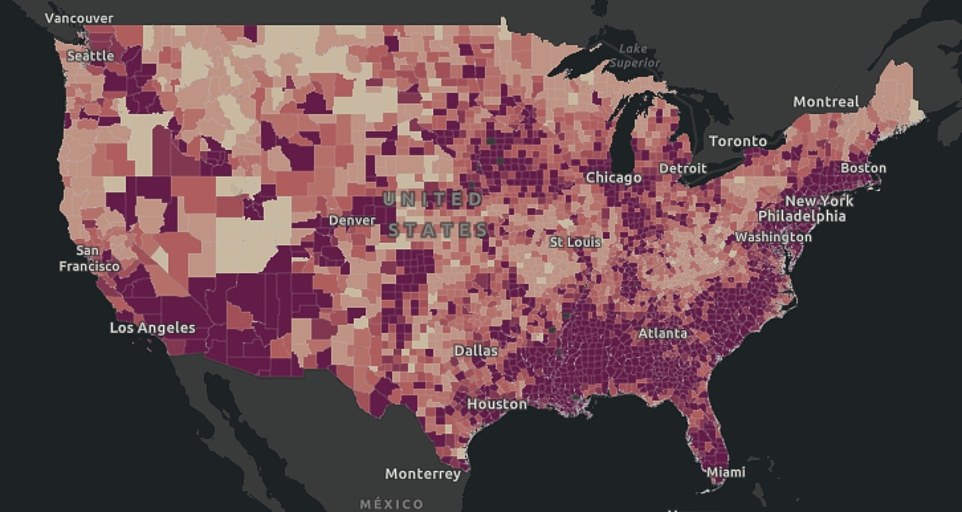 The US has seen a record 52,000 new COVID-19 cases within 24 hours on Wednesday, according to data from Johns Hopkins University. This map shows the concentration of coronavirus cases in the US

This map shows how the number of COVID-19 cases in the US has skyrocketed since January to over 2.6million in July 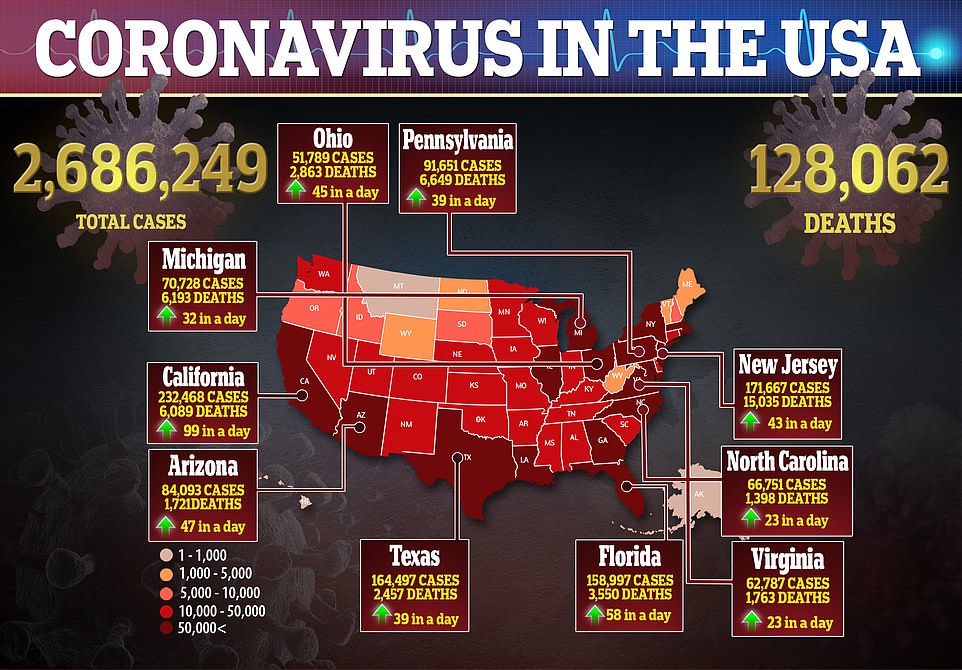 On Wednesday alone Texas broke its daily record and recorded 8,076 new cases, which is nearly 1,000 more than the day prior.

The startling spikes in cases have forced states such as Texas, California and Florida to buckle down and halt their reopenings.

On Wednesday California Gov. Gavin Newsom ordered all bars, indoor restaurant operations and movie theaters to shut down immediately in most parts of the states, nearly three weeks after the state’s bars, stores, restaurants, and salons opened for the first time following a three-month lockdown.

Since then, the number of COVID-19 cases have begun to rise again, increasing nearly 50 percent over the last two weeks, with a 43 per cent spike in hospitalizations.

Contrary to the data, President Donald Trump insisted the virus will simply disappear during an interview with Fox Business on Wednesday.

‘I think we’re going to have a vaccine very soon,’ he said.

‘We’re headed back in a very strong fashion … And I think we’re going to be very good with the coronavirus. I think that at some point that’s going to sort of just disappear. I hope,’ he added.

Tuesday’s new case increase of more than 44,000 infections marked a jump of more than 80 percent compared to a single day increase reported just two weeks ago, according to a Reuters tally.

Steep national increases in cases are driven by a handful of states, eight of which hit record-high new cases Tuesday. Those states are Alaska, Arizona, California, Georgia, Idaho, Oklahoma, South Carolina and Texas.

Top US infectious disease specialist Dr Anthony Fauci warned during a Tuesday Senate hearing that daily infections could soar to 100,000 ‘if this does not turn around’ and, while he declined to predict a specific number of fatalities, he worries the death toll in the US could reach ‘disturbing’ heights.

President Trump has attributed the surging daily case numbers to a ‘great’ expansion of coronavirus testing in the US. The number of test run Tuesday, June 30, was nearly double the number of tests run on May 30, according to data from the Covid Tracking Project.

But the number of daily cases has now far surpassed what was thought to be the pandemic’s peak, in April.

Public health experts warn that, although the number of people dying each day is down significantly, these increases typically lag behind case increases, with one recent study estimating a 17-day delay. 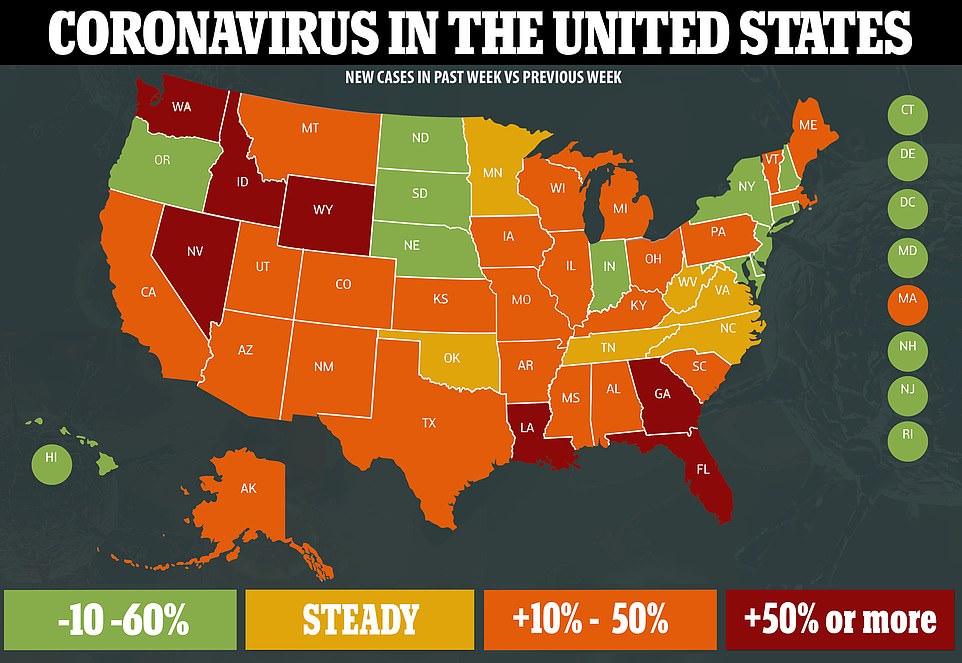 Eight US states – Alaska, Arizona, California, Georgia, Idaho, Oklahoma, South Carolina and Texas – hit record-highs for new coronavirus cases on Tuesday. COVID-19 cases across the US increased by 46 percent in the week ending June 28, compared to the previous seven days, with the majority of rises occurring in the West and South of the country 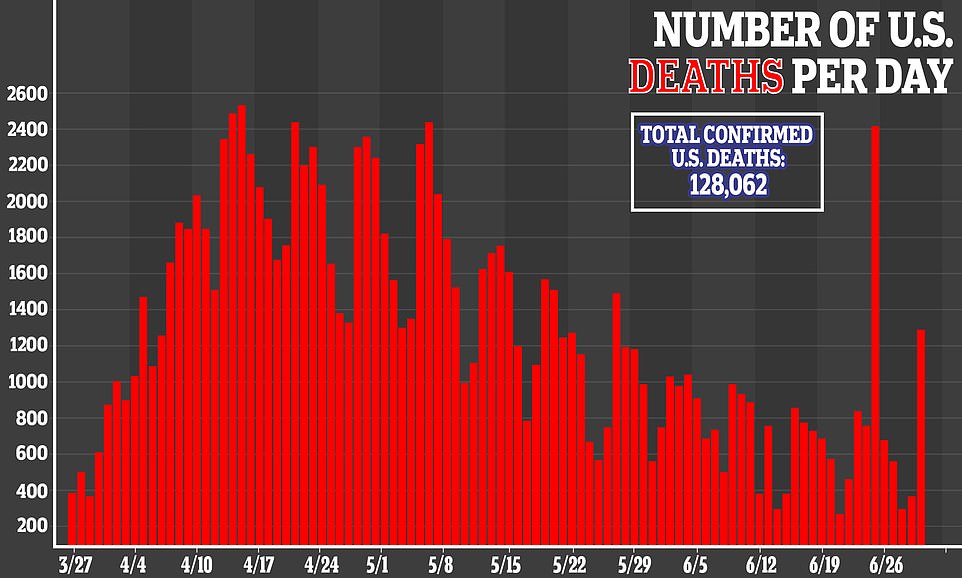 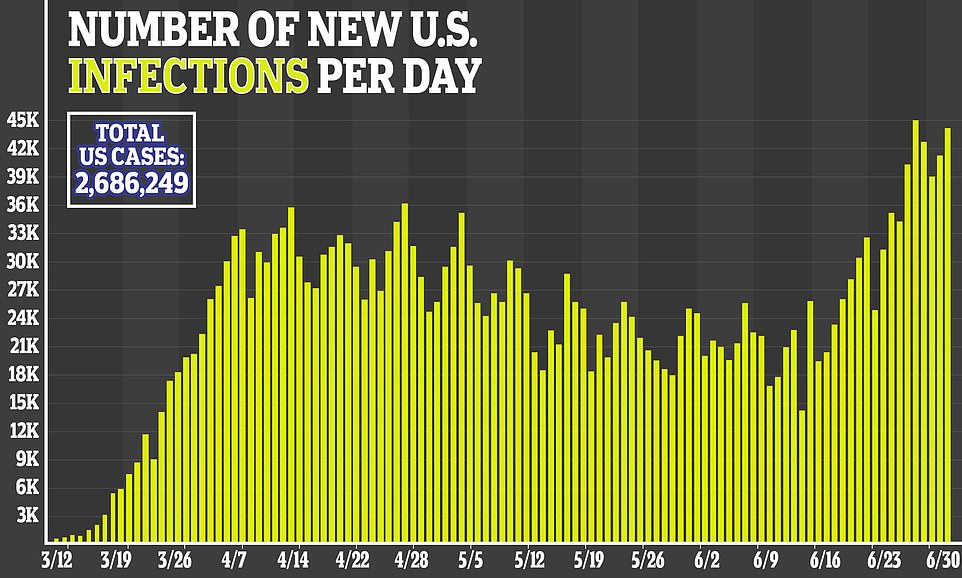 Amid alarming coronavirus case increases, states are beginning to roll back their reopenings. After its cases doubled over the past two weeks, Arizona Governor Doug Ducey issued an executive order for bars, gyms and movie theaters to shut down immediately on Monday.

Tuesday, Delaware ordered some of its beach towns shut down their bars after a recent spike in cases.

More than 11,500 people in Delaware have now tested positive for coronavirus and the state announced 95 new cases Tuesday. Over the weekend, 270 new cases were diagnosed.

Delaware Governor John Carney’s order was met with protests in at least one town. Citizens in Dover took to the streets brandishing signs that read ‘enough is enough.’

The re-closures come just before the July 4 weekend, which would have been a boon to businesses, especially in beachfront towns, where bars will now have to shut their doors.

Like Delaware, Alaska’s total number of cases is low compared to more populous states like California or Texas, but the recent uptick is disturbing. 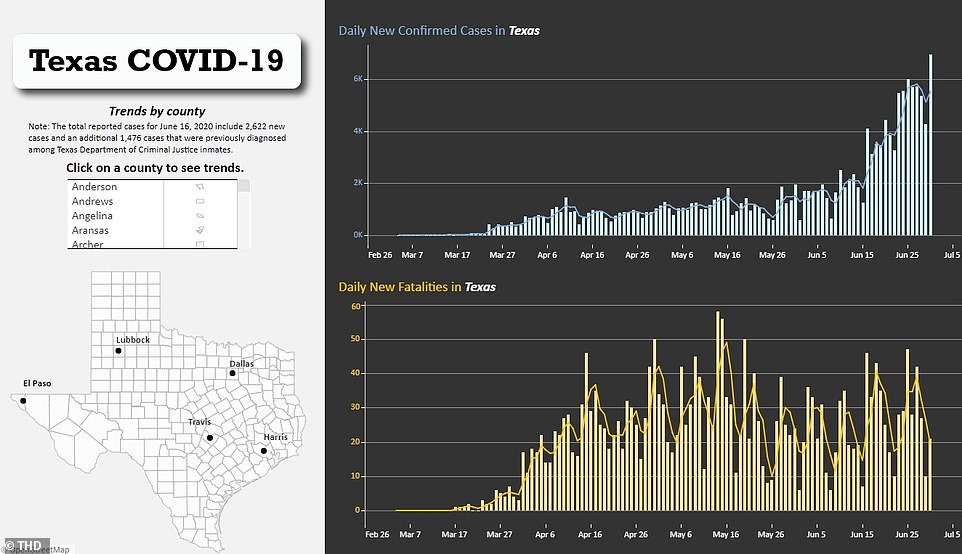 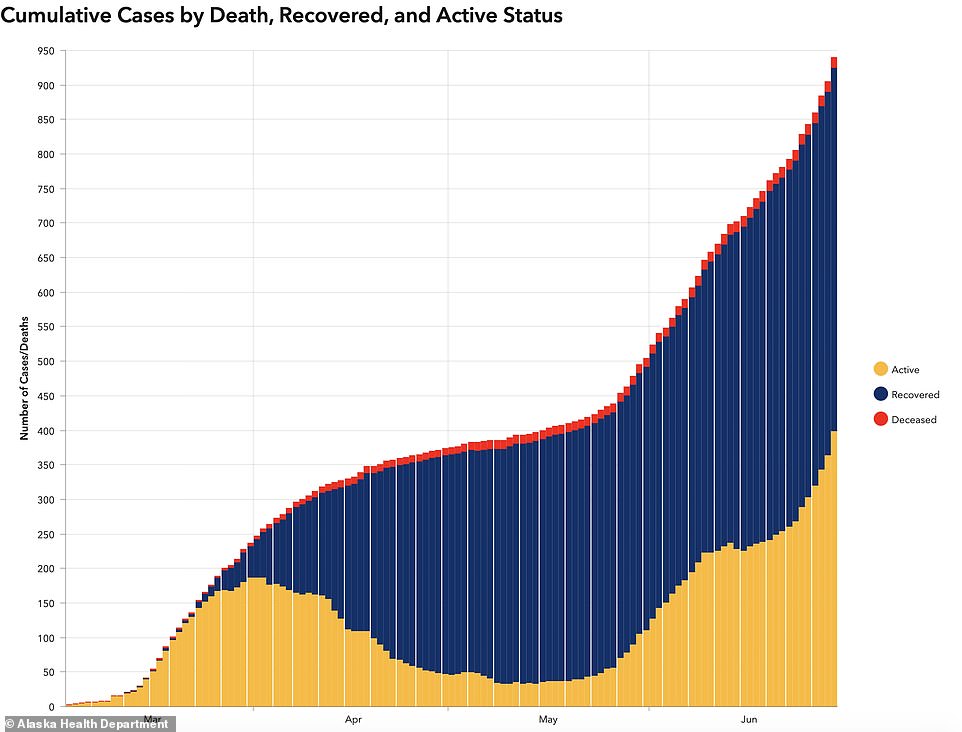 ALASKA: The state has ranked near the bottom of the US for coronavirus cases, but set a record high of 48 new infections on Tuesday

On Tuesday, 48 new cases were confirmed in the sparsely populated state, bringing the total to 544 (including 144 visitors).

It’s the largest single-day increase in cases in the state to-date, and includes 12 non-residents. Fourteen Alaskans have died of coronavirus.

Alaska was among the last states to be hit by coronavirus. Only Hawaii and US territories like Guam and the Virgin Islands currently have fewer cases.

Arizona is still the most worrisome state. New daily infections there – as sell as in Florida, Louisiana, Idaho and Washington state – have more than doubled in the past week. 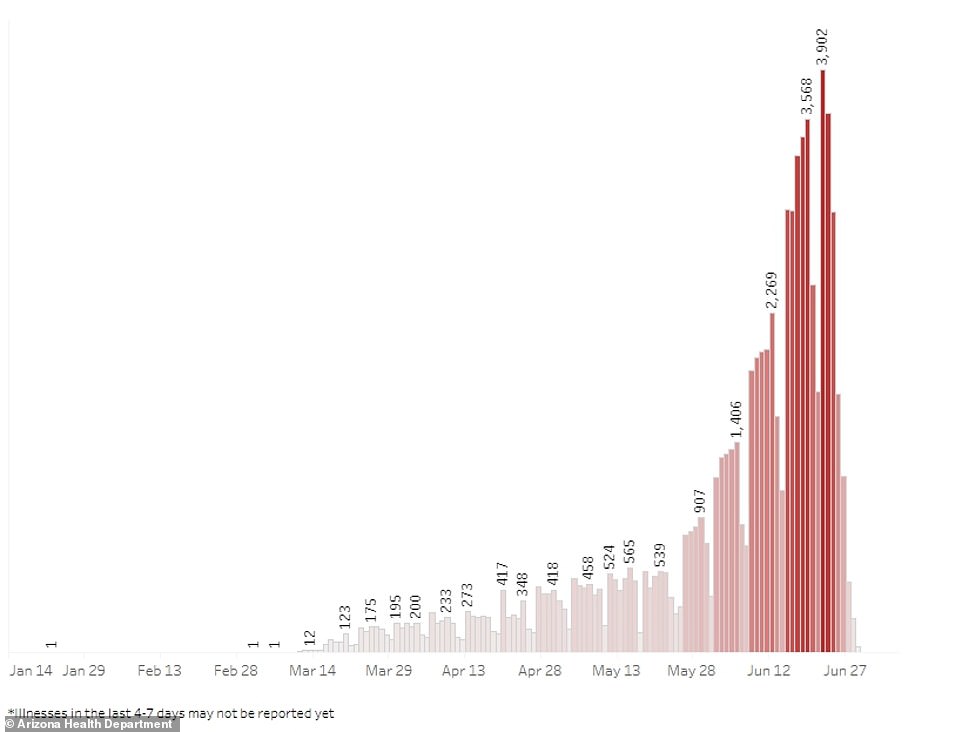 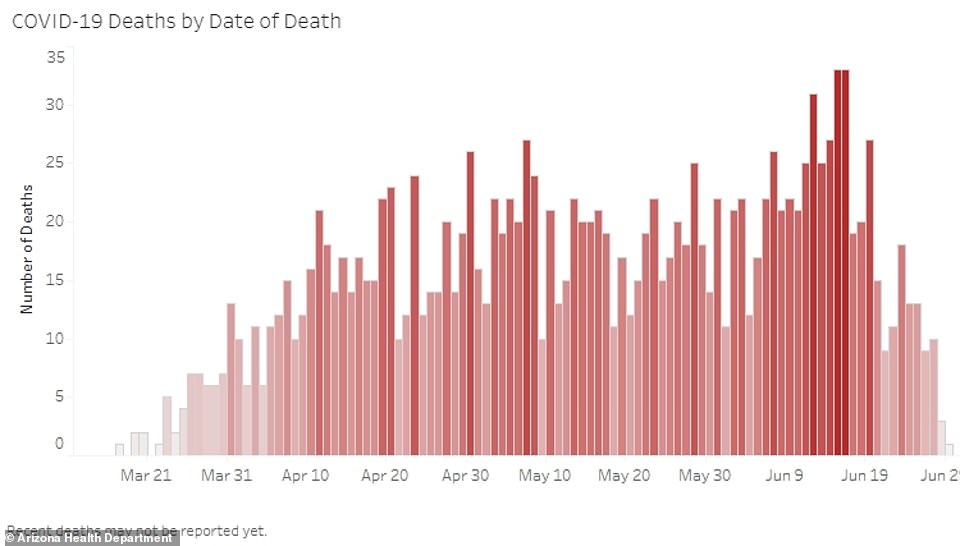 ARIZONA: Nearly 1,600 people have died of coronavirus in Arizona, but public health experts warn the death toll may lag behind the surging case rates

According to data tracking from Johns Hopkins University, 4,630 new coronavirus cases were added to Arizona’s talley on Tuesday. That falls just shy of Monday’s record 4,682 new cases in the state.

Most Arizona bars and nightclubs opened after the governor’s stay-at-home and business closure orders were allowed to expire in mid-May.

Texas, too, has rolled back its reopening, which began in mid-April. Yesterday, 6,975 new coronavirus cases were confirmed in the Lone Star state, shattering its previous single-day increase record of 5,996 new cases last week.

On Friday, Governor Greg Abbott announced a number of new, but modest restrictions on businesses. 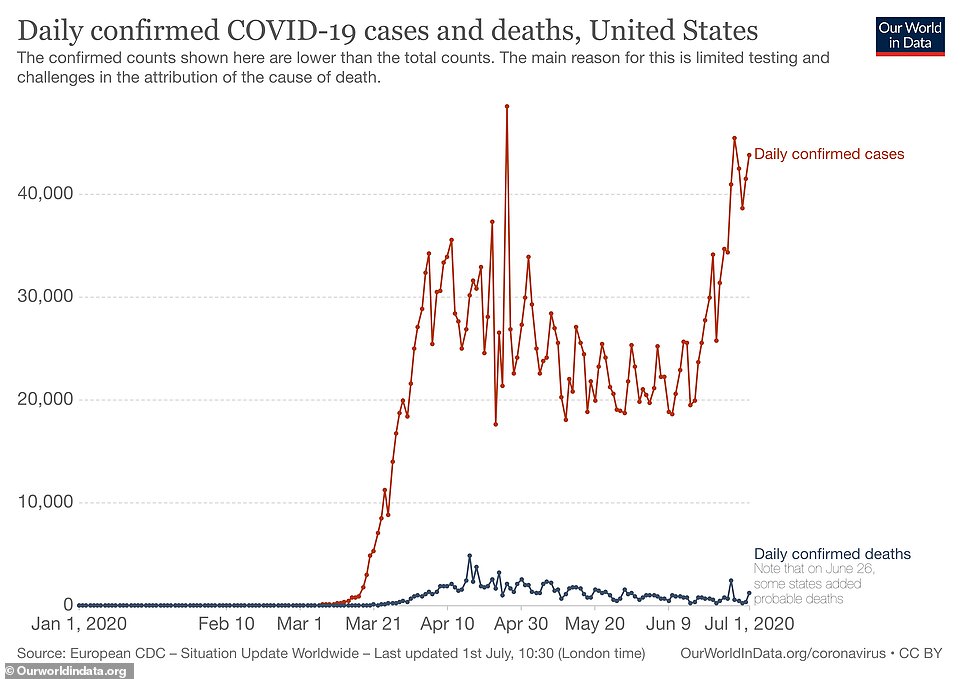 Even as cases have surged, daily deaths have remained relatively low in the US. Public health experts warn that death increases may lag several weeks behind case increases, but a major fatality spike has not been seen following the April peak of daily infections, according to a chart from OurWorldinData.org

Bars or restaurants that gross most of their income from alcohol must close at noon. Dine-in restaurants are allowed to stay open, but only at 50 percent occupancy. All river rafting and tubing businesses were ordered closed, and outdoor gatherings of more than 50 people must now get permission from local authorities to proceed.

He stopped short, however, of re-issuing full closures or stay-at-home orders.

Governor Abbott said the state would take further action only if the rate of positive tests there exceeds 10 percent. With 2,119,036 total tests run and 159,986 cases, the state now current rough positivity rate is 7.5 percent.

Now, local leaders are calling on the governor to allow them to issue their own stay-at-home orders.

‘If you are not willing to take these actions on behalf of the state, please roll back your restriction on local leaders being able to take these swift actions to safeguard the health of our communities,’ Sam Biscoe, interim Travis County judge, wrote in a letter to Abbott on Monday.

California has taken a much stricter approach to the pandemic and was one of the first states to shutdown.

But its cases are once again surging. Now, 222,917 Californians have tested positive in total, with 6,367 new positives confirmed Monday, marking the second-highest single day increase in the state to-date. 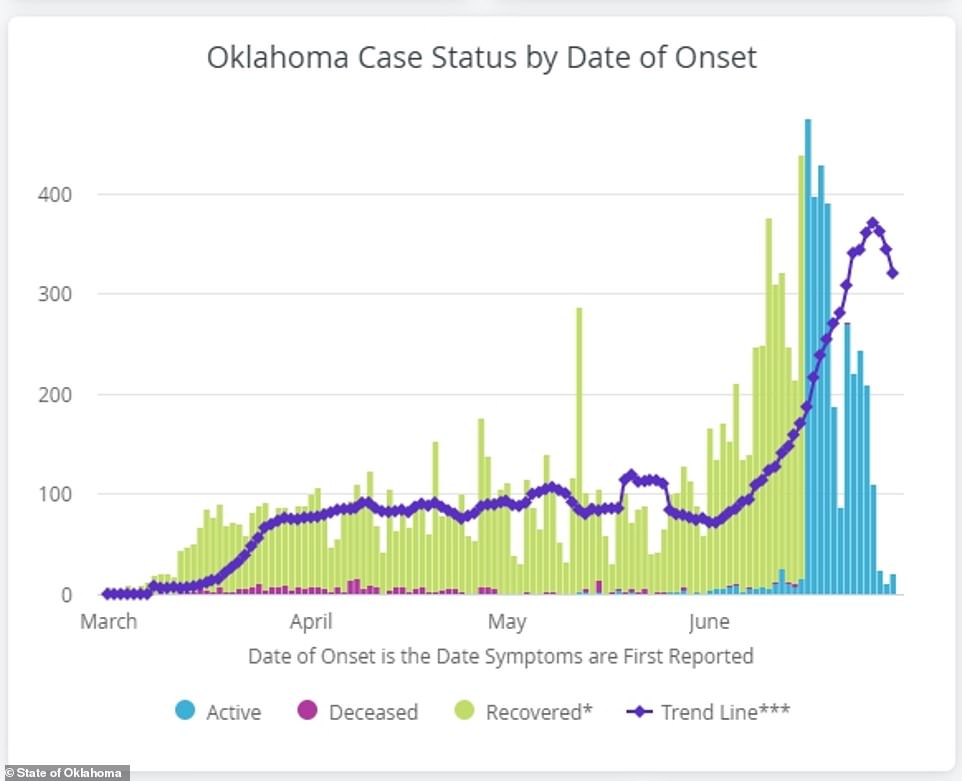 OKLAHOMA: The state has had relatively low case rates, but on Tuesday it set a record of more than 12,500 new cases (Pictured: a graph of cases by date of onset. Cases confirmed on Tuesday may be reflected in bars for previous days, when symptoms began) 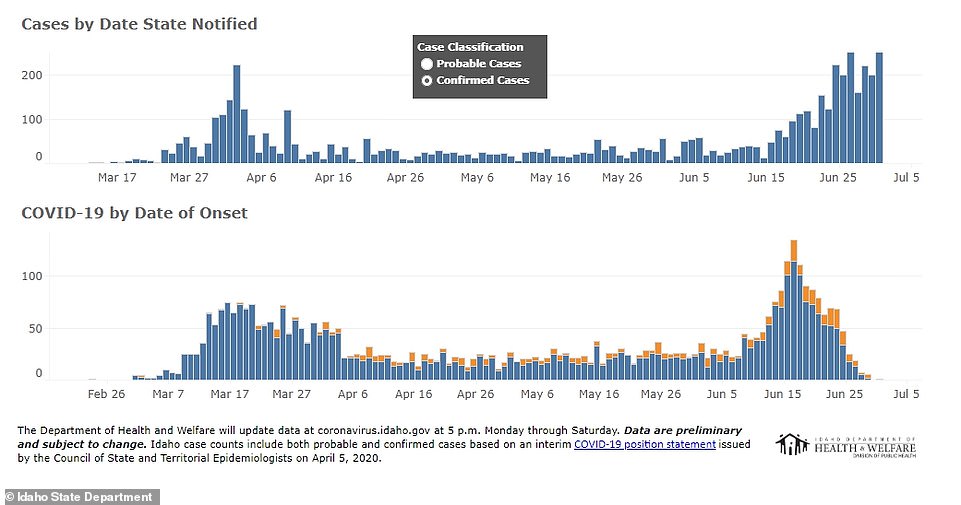 IDAHO: On June 30, Idaho set a record for the highest number of new infections in the state to-date, suggesting it may become a hotspot

On Tuesday, Governor Newsom warned that more restrictions – including mandatory mask-wearing and potentially renewed stay-at-home orders – are to come.

‘Tomorrow we’ll be making some additional announcements on efforts to use that “dimmer switch: that we’ve referred to, and begin to toggle back on our stay-at-home order and tighten things up,” said Newsom during a press briefing.

South Carolina, Oklahoma, and Idaho also hit their greatest number of new cases in a single day since coronavirus hit the US.

Although increases in the Southern US have been largely blamed for the surging overall US total, the addition of these states suggests that the issue may be more widespread than previously thought.