Dan Andrews is a moving target. Journalists need to improve their aims

Yesterday Premier Daniel Andrews gave his 100th press conference since the pandemic began – a landmark in the long, dreary trudge through COVID-19 restrictions.

The press conferences are a real-time public performance of politics, of leadership and particularly of journalism. 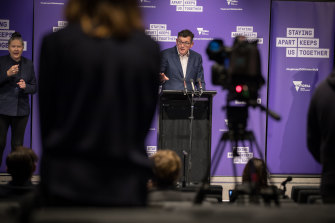 Daniel Andrews during a press conference this week.Credit:Simon Schluter

I won’t criticise journalists for asking questions, even if they are aggressive, stupid or based on false premises. Finding things out is a complicated and ungainly endeavour. I want to be judged, and to judge other journalists, not on the untidy research process but on the end result: what we publish or broadcast.

But in the Andrews press conferences the performance becomes, for many viewers, the journalism.

So why might this matter to our understanding of ourselves and our politics?

The US journalism scholar Jay Rosen has described a set of “impoverished ideas” he says lie behind the failures of political journalism.

First is the idea of politics as an inside game, in which the role of the journalist is to say who is winning and how. This kind of reporting asks how things will “play” with voters, while apparently forgetting that the voters are in the audience. It sees politics as spectator sport, rather than something in which citizens have a stake.

Related to this is what Rosen termed the “cult of savviness”. This refers to journalists who see their main capital as “being shrewd, practical, hyper-informed, perceptive, ironic, 'with it' and unsentimental in all things political”.

It is a kind of cynicism. I displayed it, probably, when I observed earlier in this article that Andrews probably wouldn’t be giving such long press conferences if they weren’t working for him.

Savviness aside, I might instead allow that his motive might be public health messaging and a belief in the need for a visible, strong leader in a time of crisis.

Of course, both could be true.

Rosen posits a thought experiment to guide journalists and their audiences: an imaginary grid along whose twin axes we plot all political coverage. On the left are appearances. On the right, realities. At the top of the grid arguments and at the bottom facts. 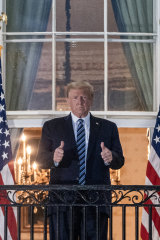 Triumph of appearances: US President Donald Trump on the Truman Balcony of the White House after his return from hospital on Monday. Credit:Bloomberg

In the appearances part of the quadrant would be media stunts: anything featuring a politician in a hard hat; Donald Trump posing without a mask on the White House balcony. This “management of impressions”, says Rosen, should be reported with heavy use of irony and only when it conveys some larger message.

In the “realities” sector of the grid would be real solutions, real proposals, consequential plans and events. Here we might plot the fact that Victoria’s second wave was seeded from a failed hotel quarantine scheme presided over by the Andrews government, as well as what the daily count of new COVID-19 cases means for our release from quarantine.

Bringing in the other axis – arguments and facts – we would plot on the top left of the grid phony arguments and manufactured controversies.

Also under phony arguments I would list some of the intellectually lazy allegations against journalists: that they are all as bad as each other, all pawns of the federal government, all corrupt, all incompetent.

Top right we would have real arguments. Here would be the reporting of competing views on tackling the pandemic. Also here we could plot the real, consequential controversy about whether the Black Lives Matter protest should have been held at all. Bottom right: straight facts. Bottom left: false and dubious factual claims. Think Trump.

So where, on this grid, do we place the Daniel Andrews press conferences?

In all quadrants – moving from day to day, question to question. 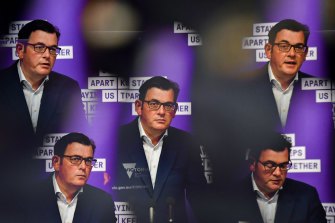 The Premier has been a moving target in his 100 press conferences.Credit:Joe Armao

After the resignation of health minister Jenny Mikakos, Andrews was asked if he had confidence in his remaining ministers. Of course he said yes. Anything else and his ministers would have had to resign. So this was a performance, a management of appearance.

Journalists would surely argue the question was relevant and timely; they were holding Andrews to account. But were they really? Andrews was performing the politics, journalists were performing the journalism, and we learned nothing.

In the ultimate display of the performance dominating the journalism, on Friday Peta Credlin – Tony Abbott’s former staffer and now on SkyNews – turned up and asked questions.

I thought her question was good: Given the mystery over who decided to use security guards in hotel quarantine, would Andrews release his relevant phone records to the inquiry?

Andrews said he would, if the inquiry asked. But on top of that was a lot of posturing on both sides.

Within minutes, SkyNews and news.com.au both published reports. The headline on the SkyNews article was inaccurate, suggesting Andrews had refused to release his phone records.

Both reports emphasised Credlin’s performance, not Andrews'. It was, according to News Corp reports, a “heated exchange” and an “ambush”. That’s not what I saw.

On Rosen’s quadrant, the question Credlin asked goes top right – an apparent attempt to get facts. But the reporting reveals the reality. This was a manufactured controversy, all about appearance.

Then there are the endless questions about what Andrews might or might not do on October 19, when we expect some relief from restrictions. All of them greeted with variations on “I don’t know yet, wait for the data”.

Journalists would say that they are asking this question because audiences want to know. Yet we learn nothing other than what Andrews and his supporting cast choose to tell us. Mostly facts. Some evasions. Some spin.

This is the point of the Rosen schema: journalists have to exercise their judgment about what is real and what is not. And this will bring them into “a proper alignment with the needs of citizens”.

So what does that mean for improving journalism? The Andrews press conferences are important, but they need only basic reporting.

Rather, we need journalists to interrogate institutions. They do this using their skill and that subtle social licence that allows for calls to the powerful, leaks and background briefings. The research process is not public. It is not a performed journalism.

Journalists are doing these things. That is the reason we know about sports rorts and branch stacking.

This kind of journalism is most likely to reveal the important story behind what has gone wrong with the Victorian public service on Andrews’ watch, as revealed by the hotel quarantine inquiry.

But as well as all this, I hope journalists will think about what new or traditional methods might allow them to capture the essential background story that plays out, under-acknowledged, in our neighbourhoods – the social story behind those public opinion polls.

Yes, there are fewer journalists these days to pound the streets. The business model that supports most news media has been in crisis for decades. (That is why we have so much opinion, which is cheap in every sense of the word.) 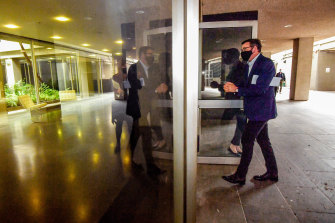 Daniel Andrews fronts the press for the 99th day in a row.Credit:Joe Armao

Yet beyond all this, and obscured by the inside game and the cult of savviness, lies a deeper story of stoicism. After months of trauma, we still cohere. Mostly, we behave well, not only in the sense of being law-abiding but in our citizenship – working, thinking, discussing and caring in a mostly functional society.

Today Daniel Andrews will step up again, shuffle his notes, ask the journalists if they are ready and begin the performance as he always does: “First things first …” and give the facts and figures.

Perhaps the main message is that he is still there. And so are we, journalists and citizens.

Dr Margaret Simons is a freelance journalist and honorary principal fellow at the Centre for Advancing Journalism, University of Melbourne. Police seize 11,000 knives, guns and weapons off the streets in a year
Celebrities Posts