‘Dangerous for our people’: Calls to rethink jab target for reopening

Aboriginal health organisations warn the national plan to open up at 70-80 per cent of the eligible vaccinated population will put the burden of death on vulnerable populations not yet considered in any Doherty Institute modelling and could be “devastating” to remote communities.

Amid a media blitz from Federal Treasurer Josh Frydenberg to hold wavering states and territories to what he has called a “very clear plan” for reopening, those at the front line of Aboriginal health are reminding leaders the modelling assumes homogenous and healthy populations. 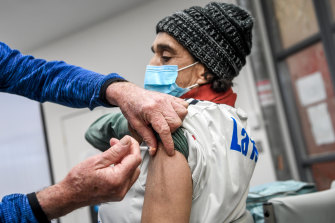 The Doherty Institute recognised this in its report to national cabinet and is putting together another major body of work that includes vulnerable populations.

It comes as new data shows Western Australia, Queensland and South Australia are well behind when it comes to Aboriginal vaccination rates, while Melbourne is performing well.

“We know that vaccination rates in our people lag in every jurisdiction except Victoria and that we have the highest rate of chronic diseases of any population group in Australia,” said John Paterson, chief executive of the Aboriginal Medical Services Alliance of the Northern Territory.

Mr Paterson said the national discussion about reopening at 70-80 per cent also ignored “extreme and worsening” health staff shortages in remote communities; the difficulty in accessing vaccines compared to largest cities and towns; and the overcrowding that makes meaningful self-isolation near impossible.

“The modelling indicates that there will be considerable numbers of deaths including in older fully vaccinated people with an opening up strategy at 80 per cent, and that is assuming public health measures … and isolating those who are infected from others are implemented effectively,” he said.

It is not uncommon in remote Aboriginal communities for housing shortages to force 15 or more people into a single three-bedroom home.

The Australian Council of Social Service has written to national cabinet urging re-evaluation of the targets. Co-chair of the Joint Council on Closing the Gap, Pat Turner, has also previously said the goal must be 100 per cent vaccination among Aboriginal and Torres Strait Islander communities.

“[One question] is about whether 80 per cent of 16-and-over is appropriate [for opening up], and the answer is ‘no’,” Dr Agostino said.

“The first reason is [the Aboriginal community] has a much younger population – the average age is 23 – and if we look at what 80 per cent of 16-and-over looks like, that’s only about 50 per cent of the total Aboriginal and Torres Strait Islander population being vaccinated.”

Mr Paterson said until vaccines were rolled out for all children, including those under 12, “these 70-80 per cent targets will be dangerous for our people.”

Queensland premier Annastacia Palaszczuk and Northern Territory Chief Minister Michael Gunner have also raised concerns about unvaccinated children as the nation steps through the phases towards “living with COVID”.

“There is no exit from lockdowns unless we have a plan for our kids,” Mr Gunner said.

New data shows the highest fully vaccinated Aboriginal communities are in Victoria, with Melbourne’s inner-east leading at 70 per cent.

Seven of the 10 least vaccinated areas are in Western Australia, where more than 100,000 Aboriginal people live. The state’s southern outback region has a full vaccination rate of just 7 per cent.

Sydney is toward the top of the rankings. New South Wales’ least fully vaccinated region (13 per cent) is the far west – where a current outbreak in the community of Wilcannia has been described by a local health group as a “humanitarian crisis”.

The Doherty Institute report used by national cabinet to agree to the 70-80 per cent targets made clear it had to use assumptions, including equal access to healthcare, and that another body of work addressing vulnerable subpopulations was on the way.

A spokeswoman could not say when it would be finished or put to national cabinet.

Speaking to the ABC on Wednesday afternoon, Mr Frydenberg said: “The view expressed very explicitly in the Doherty modelling is the country can open up when it reaches … 70-80 per cent in individual jurisdictions as well as 70-80 per cent vaccination rates across the nation as a whole.

“This is the key point – the country needs to learn to live with COVID.”