I believe I can fly! Daredevil spins in circles over a lake while hanging off the end of an excavator boom

Three brothers defied gravity by fashioning a swing from an excavator boom when wet weather forced them to take a break from work.

Australian farmer Justin Hall’s brother was filmed swinging over a lake while clinging onto the boom near Caniaba, a village in New South Wales.

Video of the daring stunt showed a small black dog chasing him as he held onto a rope attached to the boom. 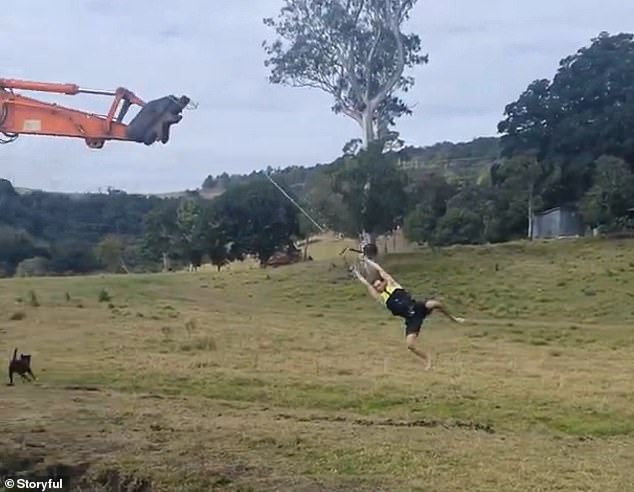 Australian farmer Justin Hall’s brother was filmed swinging over a lake while clinging onto the boom near Caniaba, a village in New South Wales

Footage originally posted on Instagram in August recently went viral when Mr Hall uploaded it to TikTok with the soundtrack I Believe I Can Fly by Charlie Grönvall.

As Mr Hall’s brother clung to the boom the excavator was operated to swing him around the side of a lake, occassionally dipping his feet into it.

After a few trips round Mr Hall gained in confidence and the excavator boom was lifted higher so he was flying around.

At the end of the video the man was safely deposited into the lake. The incredibly dangerous stunt could have resulted in serious injury but luckily no one was hurt.