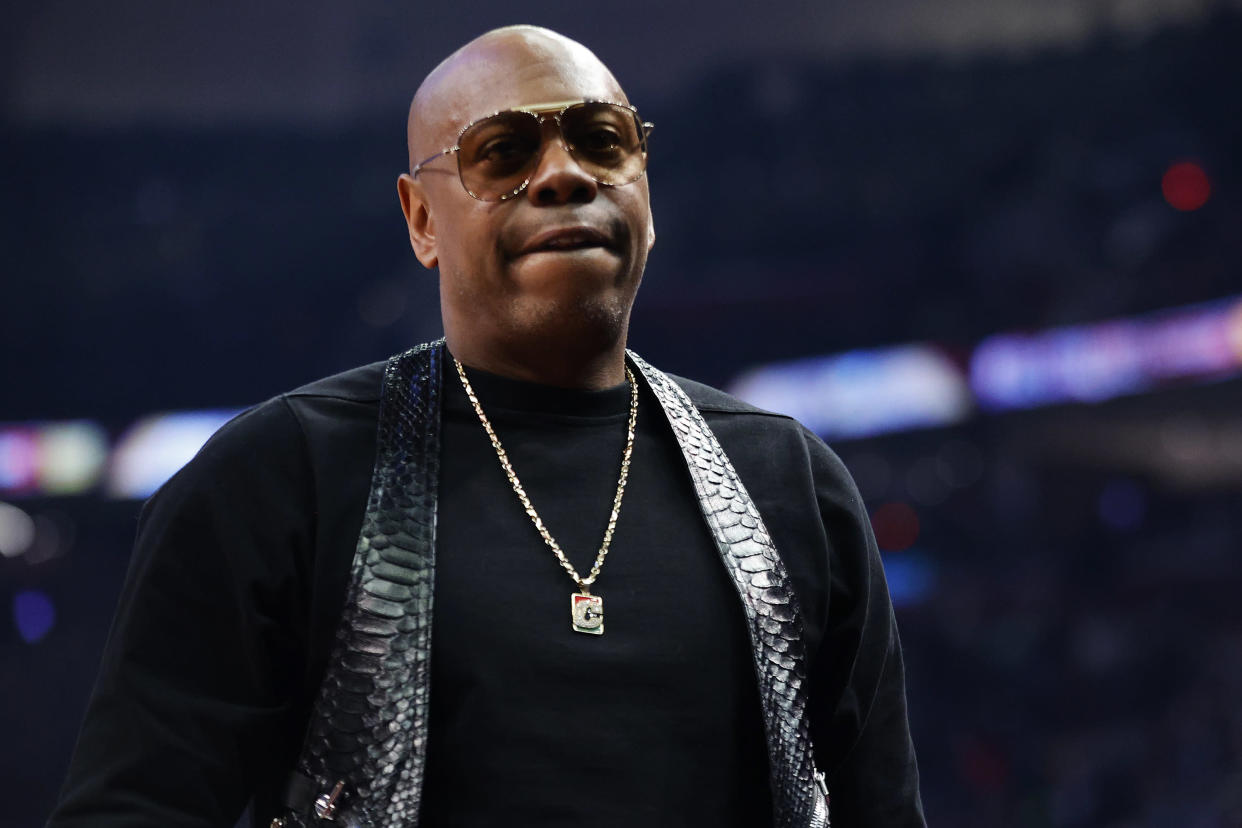 Comedian Dave Chappelle is facing criticism after attendees at John Mulaney’s Friday show in Columbus, Ohio claimed that the jokes he made during his surprise appearance were targeted at the transgender community.

No phones or recording devices were allowed at the Schottenstein Center event, however, attendees shared on social media that Chappelle, who lives in Ohio, had made a series of transphobic jokes as he performed the opening set. Many of the attendees, who were there to see Mulaney and did not know Chappelle would appear, were outraged by the alleged statements.

“My favorite part of tonight was when dave chappelle ambushed us at the john mulaney show, told a bunch of transphobic jokes, a massive stadium of people laughed, and then john mulaney hugged him at the end,” one Twitter user wrote.

my favorite part of tonight was when dave chappelle ambushed us at the john mulaney show, told a bunch of transphobic jokes, a massive stadium of people laughed, and then john mulaney hugged him at the end

“God dave chappelle at the columbus john mulaney show was so cringey – made me get second hand embarrassment at his re-used, bland, transphobic comedy that can literally be found in any online comment section from an edgy twelve year old,” another Twitter used said.

god dave chappelle at the columbus john mulaney show was so cringey – made me get second hand embarrassment at his re-used, bland, transphobic comedy that can literally be found in any online comment section from an edgy twelve year old.

the way the entire stadium stood and cheered for him made my heart sink. 2 girls behind me laughed harder at chappelle than they did at some of mulaney’s jokes and i just couldn’t fathom knowing what they would’ve thought about a trans person sitting right in front of them.

Many attendees demonstrated their disappointment with Mulaney, since he allegedly came onstage and hugged Chappelle after he performed the opening set.

I take back every defense I’ve made of John mulaney, very divorced of him to have Dave Chappelle open for him and tell a bunch of transphobic jokes. Elon Musk-esque. It’s serving moldy leftovers in the lunchbox in the office fridge.

@mulaney John, so many of us think the whole world of you. so I’m really disappointed that Dave Chappelle was at tonight’s Columbus show, doling out transphobic jokes—and I’m kind of devastated that you then embraced him and thanked the audience for dealing with it.

In contrast, some attendees were thrilled with the cameo by Chappelle. There were also several people defending both comedians, saying that just because Mulaney had Chappelle open for him doesn’t mean he agrees with all of his jokes.

So damn sick and tired of people CONSTANTLY dumping over John Mulaney. Just b/c he had Dave Chappelle open 4 him does NOT in ANY way, shape, fashion or form mean he agrees w/his EVERY joke, thought, etc. You can have an opener and disagree w/them. DAMN!

Man, people are *salty* about Dave Chappelle showing up at the John Mulaney show in Columbus.

Anything goes at a comedy show. Grow up.

It’s been a tumultuous month for Chappelle, who was attacked on stage at the Hollywood Bowl in Los Angeles as he performed as part of the Netflix Is a Joke Fest. The attacker rushed at him toward the end of the set and tackled him to the floor, according to footage gathered at the time. The man then ran away behind a screen on stage, where he was found by security.

Chappelle was not injured in the incident, police reported. He continued on with his set, even making jokes about the attack.

“It was a trans man,” he said, a reference to the controversy around comments he made in his 2021 Netflix special, The Closer. In the special, he stated that “gender is a fact” and went on to defend Harry Potter author J.K. Rowling, who is known for making transphobic statements.

Since his Netflix special sparked controversy, the comedian has continued to fuel the fire with additional jokes about the LGBTQ+ community. Back in November at the screening of his documentary Untitled, Chappelle reportedly used the anti-gay “f-slur” and made jokes about pronouns. He also pretended to identify as a woman to get a cushier prison cell.

Despite his statements, it’s clear Chappelle won’t be slowing down his momentum anytime soon. In February, it was announced that he would return to Netflix with a series of new specials, titled Chappelle’s Home Team.