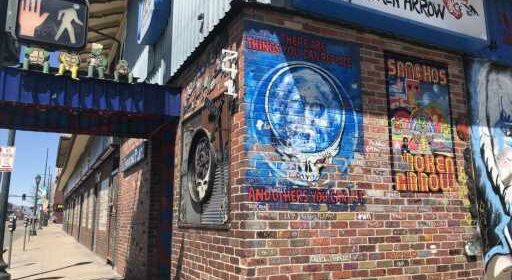 The Denver Department of Excise and Licenses could soon revoke the liquor and cabaret licenses of jam-band bars Sancho’s Broken Arrow and So Many Roads Brewery after police investigations revealed cocaine dealing, underage alcohol sales and other violations, the agency said in public filings.

There has not been an official recommendation yet, but the complaints compel bar’s owners to show cause over why their licenses should not be revoked or suspended. Sancho’s has been the target of similar complaints before, all of which were settled outside of official hearings.

The Grateful Dead-themed bars, formerly owned by Denver promoter and businessman Jay Bianchi, were sold in 2020. Majority owner Tyler Bishop and partner Timothy Premus, both named in the complaints, took over Sancho’s; it’s listed as Missing Man Formation LLC in the documents. Bishop is the sole owner of So Many Roads.

Sancho’s in particular was shut down by the city during the early days of the pandemic in 2020 for violating stay-at-home orders to close, according to police reports, and is the target of numerous complaints of sexual assault and drugging that have allegedly taken place at 741 E. Colfax Ave. in recent years, according to police reports and allegations made during interviews with musicians and former patrons.

So Many Roads has been the target of in-person protests and boycotts from the Colorado Musicians Union over allegations of nonpayment, verbal and physical abuse by Bianchi, and other violations from both Bianchi and Bishop.

The new violations started with an anonymous tip, which led to a pair of Denver Police Department investigations that started in January 2021 and concluded in April of this year over possible cocaine and dimethyltryptamine (DMT) sales, underage alcohol sales, unlicensed security guards, an unlicensed weapon (stun gun), and a violation of its “tavern” license (not serving food).

The police reports state that on Sept. 23, 2021, DPD’s Vice Team conducted an undercover operation at So Many Roads, at 918 W. 1st Ave., in which Steven Ackermann, who identified himself as an employee and maintenance man for the venue, offered to sell narcotics to police officers. They agreed to meet later that night at Sancho’s.

“Once in the bathroom, (undercover) Officer Streeter observed Ackermann holding a bag containing a white power (sic) (suspected cocaine) and appear to be breaking it up on the countertop …,” according to the complaint. “Officer Streeter also could hear a male and a female in the sole bathroom stall. When the two came out of the stall, the male was holding a dollar bill, containing a pile of white powder (suspected cocaine) … .”

The officers then bought the substance, which later tested positive as cocaine, on the venue’s patio. The Sancho’s-specific complaint alleges similar dealings, in which undercover officers say they witnessed bartender Adam Walloch “engage in what appeared to be a hand-to-hand narcotics transaction while at the bar. This transaction was with a person later identified as Tyler Bishop, an owner of Sancho’s.”

Walloch told them that former owner Bianchi “transferred the ownership of the bars to Bishop because the original owners (sic) name (Jay Bianchi) was too hot with law enforcement.” The report states that, after some discussion, officers bought cocaine from Walloch on the patio of Sancho’s.

“Ackermann stated Jay knows that he sells narcotics at the location and stated that Jay gets high with them all the time,” according to the report, under the heading Factual Background. “Ackermann stated payment exchange occurs between Ackermann and Jay through a ‘hippie tax’ … Ackermann described the hippie tax stating that Ackermann brings business to Jay’s bar, brings more people in who often purchase drinks, and when Jay catches Ackermann selling narcotics, Ackermann will give Jay whatever money Ackermann made from that sale … .”

The bag of white powder from the Sancho’s purchase also tested positive for cocaine, according to the police report.

The new complaints order the owners to appear for a hearing at the Denver Department of Excise and Licenses on June 21 and “show cause why its Dance Cabaret and Tavern Liquor License(s) at 741 East Colfax Avenue, Denver, Colorado, should not be suspended or revoked for alleged violations of law or regulations.”

Stripping a business of its liquor license is not a first resort, according to a spokesman for Excise and Licenses, unless a detailed report has set the stage and the head of the department — currently Molly Duplechain — recommends it. Even then, the department works with business with minor violations — for example, underage consumption — to settle them on the side instead of conducting official hearings.

Sancho’s is the subject of two former settlements, according to the spokesman.

Bianchi has a years-long history of personal and business violations and legal troubles at his venues, which also formerly included the bars/music venues Be on Key Psychedelic Ripple and Quixote’s True Blue, according to police reports and allegations and charges reported in Denver Post interviews.

Bianchi was cited for opening the former venue during the pandemic after reports of raucous parties at the Uptown bar. In May 2020, Be on Key was heavily damaged by fire, and a Denver Fire Department investigation revealed it started in the back of the venue. An exact cause was never determined, according to a report, and the case was closed.

Neither Bishop nor Bianchi immediately responded to requests for comment Monday.

This is a developing story and will be updated.