Home Secretary Priti Patel’s bid to report 23 cross-Channel migrants to Spain has failed after the deportation flight was cancelled due to a last minute legal challenge.

The plane was scheduled to leave the UK on Thursday morning, but had to be scrapped while the appeals are considered.

The Home Office accused such legal claims of typically being ‘baseless and entirely without merit’.

The ministry had aimed to remove 23 migrants yesterday morning after checks on EU databases found they passed through Spain on their way to the UK, as reported by The Times.

The comments come as the department was forced to abandon using Dad’s Army-style video where it accused ‘activist lawyers’ of trying to disrupt the asylum system. 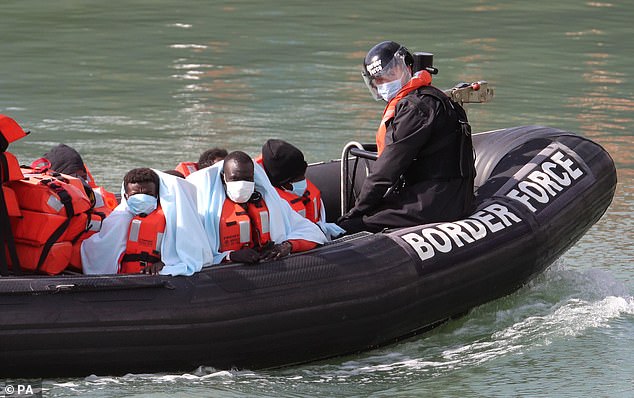 A group of people thought to be migrants are brought into Dover, Kent, by Border Force officers on Thursday 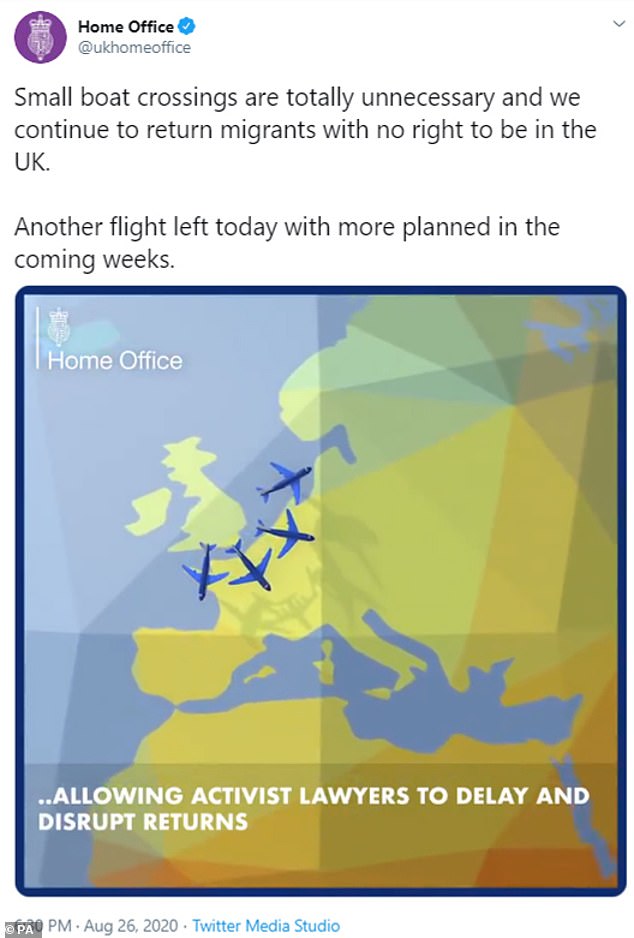 Simon Davis, president of the Law Society, said: ‘Attacks on the integrity of the legal profession undermine the rule of law. To describe lawyers who are upholding the law as ‘activist lawyers’ is misleading and dangerous.’

Ms Patel was understood to be furious that the planned deportation flight was halted.

A government source told the newspaper: ‘There’s a bunch of particularly loudmouthed lawyers and barristers who seem to spend more time on social media than representing their clients, who think even the mildest criticism of their profession will bring about the destruction of democracy.

‘It’s patently absurd and they’d be better off leaving this kind of hysterical ranting to Her Majesty’s Opposition’.

A Home Office spokeswoman said: ‘The Government’s efforts to facilitate entirely legitimate and legal returns of people who have entered the UK through illegal routes are too often frustrated by last minute challenges submitted hours before a scheduled flight.

‘These claims are very often baseless and entirely without merit, but are given full legal consideration, leading to removal being rescheduled. 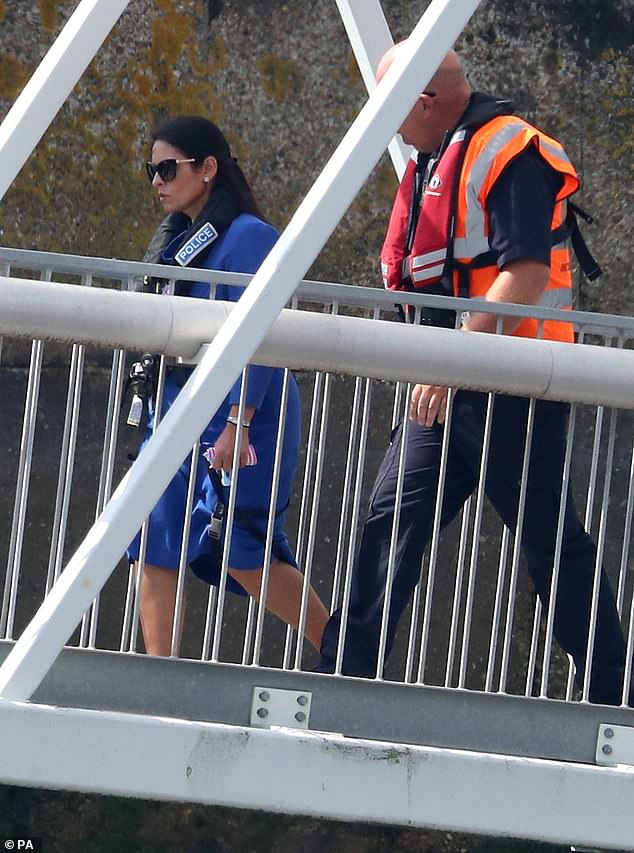 Home Secretary Priti Patel in Dover in early August. Ms Patel was understood to be furious that the planned deportation flight was halted

‘This can effectively result in the timing out of a return due to stringent Dublin Regulations.

‘It is right that we seek to remove migrants who have travelled through a safe country and have no right to remain in the UK.’

The department deported 12 people on Wednesday – six people to France and six to Germany. They were nationals from Kuwait, Iran, Syria, Iraq, Kuwait Bidoon, Sudan and Yemen.

On August 14, an Iranian national was deported to the Netherlands, where it was determined he had an immigration status, after he arrived in Dover after crossing the Channel on a small boat.

Some 14 other Channel migrants, including nationals from Iran, Iraq and Afghanistan who arrived in the UK – but the Home Office claimed had no right to be in the country – were deported on August 12.

It comes as charities reported that eight suicide attempts had taken place in the days leading up to the latest flights in Brook House immigration removal centre near Gatwick, with three people being taken to hospital.

The Home Office would not confirm the number of incidents, but a spokeswoman said: ‘We take the welfare of the detained individuals extremely seriously.

‘All immigration removal centres have trained medical staff on hand to provide medical care to those in detention. Everyone who is removed from the UK is seen by a health professional and the Home Office is notified of any individual who is not well enough to be removed.

‘We make no apology for seeking to remove those who have travelled through a safe country and have no right to remain in the UK. This is part of our strategy to make this dangerous route unviable.’

Chai Patel, legal policy director at the Joint Council for the Welfare of Immigrants, said: ‘The treatment of immigration detainees in the UK is a matter of national shame.

‘We are facing a global pandemic and the Home Office has chosen to focus on running dangerous and rushed deportation flights, placing vulnerable refugees at risk and prioritising speed over fairness.

‘Every time a flight is stopped, we find people on it who go on to win their cases.

‘We need to fix the broken system that tries to deport people at all costs, and we must resist all attempts to speed up unjust deportations and reduce legal protections for people who already have almost none.

‘Eight human beings were so scared of what we were willing to send them back to face, that they tried to take their own lives. No one under our protection should ever feel that way again.’

It comes after last week campaigners said some migrants who crossed the Channel to the UK were on hunger strike in the detention centre ahead of facing deportation.

According to the Home Office’s latest annual report, the department incurred ‘fruitless payments totalling £2.2 million’ in 2019-20 as a result of ‘cancellations of scheduled flights intended to remove ineligible asylum seekers, which were subsequently cancelled due to asylum seekers being granted the right to appeal’.