Devastated family say farewell to girl, 12, who killed herself after being bullied on school laptop during lockdown

A DEVASTATED family said farewell to their "cheeky" 12-year-old girl, who killed her self after being bullied on her school laptop during lockdown.

Charley Patterson's grief stricken mother said her daughter was "no longer hurting or afraid" anymore at the small service yesterday. 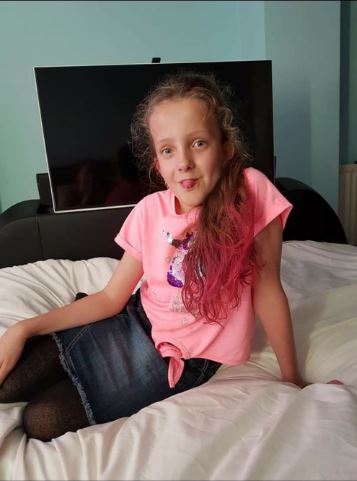 Charley Patterson, from Cramlington, Northumberland, was found dead at the beginning of this month by her devastated father, Paul, after she abused by bullies on her laptop and in the classroom.

She tried to take her own life twice before, last November and in March.

Her horrified mother Jay, 35, took Charley's phone away to try and stop the horrible taunts but during lockdown she had to have her laptop for school and was subject to even more bullying.

Jay told the small funeral of just 15 people at Whitley Bay Crematorium that her daughter was "no longer hurting or afraid".

She said:"Her smile always reached her eyes, she always had a cheeky smile and a wisecrack upon her lips."

And the grieving mother told  ChronicleLive: "She was like my shadow. During the day in the week it is easier because it's as though she is at school.

"It is on a night or on a weekend and she's not there. When you're making dinner and there's one less meal to make. It is so hard."

'A ball of energy and fun'

Celebrant Janet Green described the 12-year-old as a "ball of energy and fun" who had her doting father "wrapped around her little finger".

The young girl loved climbing trees and heading out on a bike ride with her best friends.

Her father shared a poem in honour of his "fun-loving" daughter, celebrating her "smile to fill your heart", her love of animals and horses, her passion for music, and fondness of Tik Tok and kickboxing.

He said: "We are all going to miss her sass, her cheek, her smile, her sense of fun, and as hard as it is to hear and to say, she's no longer hurting and no longer afraid."

"The love that we have for her will stay forever in our hearts. She has always been my miracle baby girl and always will be. She will always be with us."

Horses with teal headdresses brought Charley to the service, and her siblings lit candles and lay roses on her coffin in their sister's memory.

And she had previously sought professional help after her mental health disintegrated because of the bullying.

But she was told she could have to wait as long as three years before she was given any help, and almost no follow up from mental health services supposed to care for her, her family said.

Jay revealed the full extent of the horrible abuse her daughter was subjected to, saying she was called an "emo freak" at school and that she was told "the only way your family will be happy is if you are dead."

After she tried to kill herself last year, disgusting bullies told her: "You are so useless you can't even kill yourself properly''.

And the family asked loved ones to donate to the Charley-Ann Patterson trust, dedicated to giving young people in the area a safe place if they are struggling.

Jay has slammed health bosses for letter her daughter slip through the cracks, and is calling for legislation to make sure kids aren't left of three year waiting lists.