London: Thousands of Australians stranded overseas have been hit by even more uncertainty after the national cabinet's decision to slash international arrival caps forced a major airline to suspended all flights to Sydney, Melbourne and Brisbane.

There are fears other carriers might also wind back Australian routes because the small number of citizens permitted to return each week has made commercial flights financially unviable. 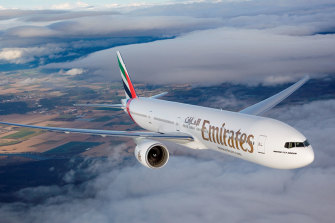 Emirates has announced that it is suspending flights to Australia until further notice.

Emirates announced late on Friday night that all flights to and from Sydney, Melbourne and Brisbane would be suspended until further notice "due to operational reasons".

The United Arab Emirates carrier was conducting daily flights between Dubai and Sydney and Melbourne and five flights a week to Brisbane, meaning the decision will wipe out 19 flights per week for Australians in Europe and the Middle East who have been waiting months to get home.

The airline only flies Airbus A380s and Boeing 777s – two of the largest modern planes in the industry.

National cabinet last week resolved to reduce international arrivals in NSW, Western Australia and Queensland by 50 per cent until at least February 15 amid fears the hotel quarantine system could not cope with a new and more transmissible strain of coronavirus circulating in Britain.

Emirates' announcement was "crushing" for Australian couple Brian Fisher and Martha Walkowsky, who have been stranded in Dubai with their four-year-old twins, Phoebe and George, for months and were due to fly home on January 27. The family have already had four flights cancelled since September.

"This is the closest we have ever been to getting home and we really thought it was going to work. We keep walking around saying over and over 'what are we going to do?'.

"I feel like giving up almost every day but I can't because we have two small children and we can't show our despair to them. We are going to have to start begging for work just for food money – it's coming to that."

Nearly 40,00 Australians are still stuck overseas nearly a year after the pandemic began – 4800 of whom are classed as "vulnerable". 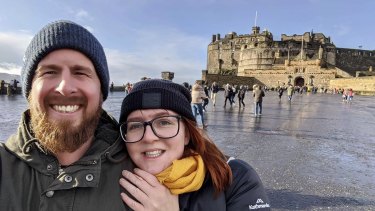 Australians Ben Goodwin and Amy Webster had their tickets on a Qatar flight cancelled because of the passenger cap reduction.

"My grandfather passed away last year and I couldn't get back for that so I don't want my fiance to go through that, because it was just awful.

"We feel abandoned. It feels like we aren't wealthy or rich enough to get home which I don't think should be a factor in trying to get back to your own country."

Many commercial flights were already operating with just a few dozen passengers to meet the caps before Prime Minister Scott Morrison and state leaders decided to cut them even further.

Under the lower limits, NSW can only take 1505 people a week into hotel quarantine and Queensland just 500. Victoria was already only taking about 1100 people a week.

The Emirates decision will put fresh pressure on the federal government to arrange special repatriation flights in partnership with Qantas.

Another Qantas repatriation flight with 199 passengers left London for Australia on Friday but further flights are yet to be approved by the federal government.

An Emirates spokesman apologised for "the inconvenience caused to our customers".

"Australia remains an important market for Emirates," he said. "We continue to serve Perth with twice-weekly flights and we are working hard to prepare for resumption of services to our other points."