Did Albanian robbers kill British mother with baby at her side?

Did Albanian robbers kill British mother with baby at her side? How upmarket Greek neighbourhood has been hit by THREE villa burglaries involving extreme violence in the months before murder – as husband cradles their baby at funeral

Dressed in a black suit, a young father carefully cradles his baby daughter in his arms and walks over to his wife’s coffin so they can tenderly lay a flower on top together.

It’s a heartbreaking scene under any circumstances, but especially so for the family of Caroline Crouch, who was laid to rest yesterday just three days after she was murdered in a burglary at her home in an affluent Athens suburb.

Her husband Charalambos Anagnostopoulos, 33, then addressed those who had come to say their final farewells on the island of Alonissos where Caroline, who held a British passport, had spent much of her childhood.

‘One thing that makes me even more sad than her death is the fact that our daughter will grow up without remembering her beautiful mother, who was the joy of life, though our daughter will always be with me and with all of us.’ 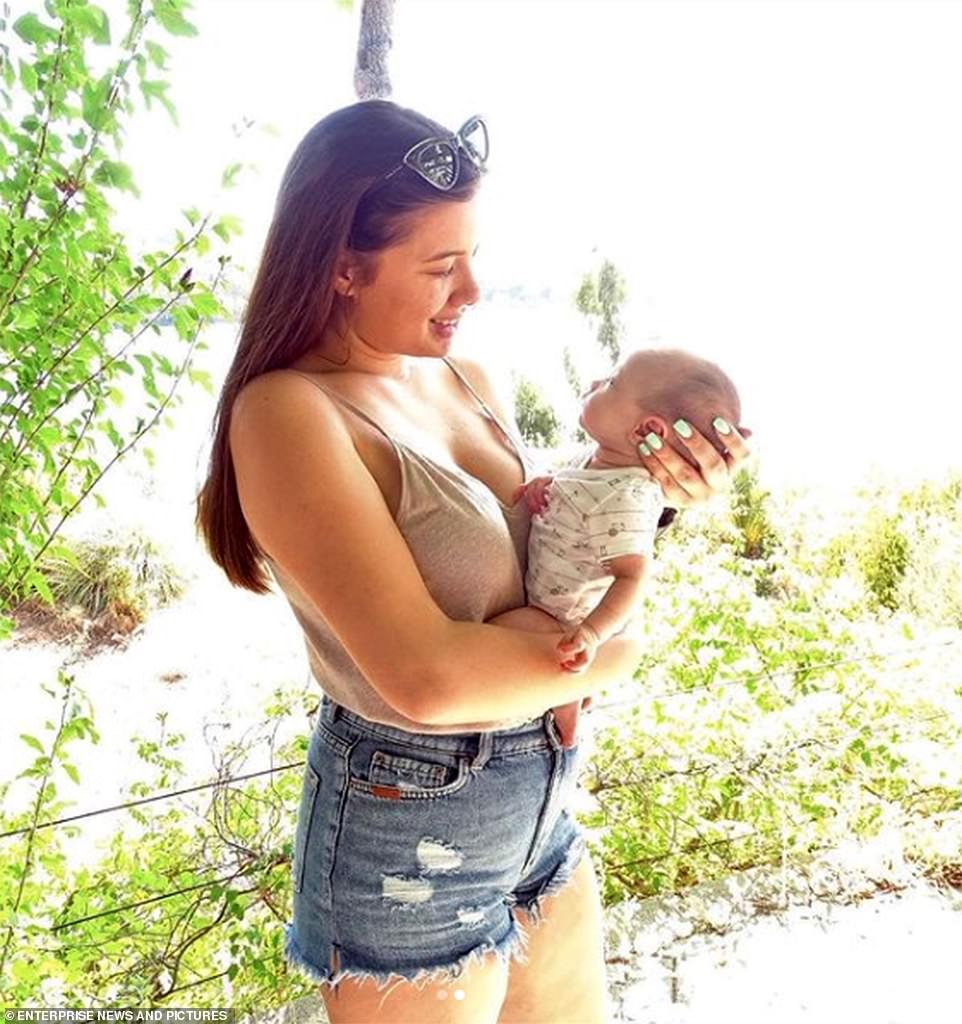 Tragic Caroline Crouch, 20, pictured with her 11-month-old daughter Lydia who was found next to her mother’s body

As he spoke, Caroline’s mother, Susan Dela Cuesta, who runs a cleaning firm on the island, sat hunched over her daughter’s open casket, silently weeping. Caroline’s father David, 78, who was born in Liverpool but retired to Alonissos after a career in the Armed Forces and oil industry, is thought to be ill.

Dozens of floral wreaths, decorated with white roses to symbolise the innocence of a young woman taken too soon, were laid outside the entrance of the island’s Greek Orthodox church (Agia Paraskevi) at the top of a cobbled hill.

About 400 islanders, plus many of Caroline’s old school friends, each dressed in black and carrying a small bouquet, made their way to the church. Those unable to squeeze inside sought patches of shade from the sweltering heat in the courtyard.

Surely few funerals in this part of the world — a popular tourist destination in the tranquil blue waters of the Aegean Sea — could have provoked such an outpouring of public grief. Mourners, including the mayor, lined the streets as she was laid to rest in the place where she was known and loved. All the shops and businesses on Alonissos closed as a mark of respect.

But behind the sadness and tears, there was also much anger. How could there not have been given the terrible circumstances of Caroline’s death, which has made headlines around the world?

The brutal fact is that 20-year-old Caroline was murdered during a robbery at her home in the Greek capital in the early hours of Tuesday. Yet, that does not begin to convey the sociopathic violence which accompanied the raid and the heartbreaking scene police officers were confronted with inside the house after the robbery.

Upstairs, they found Caroline’s 11-month-old daughter Lydia crying and instinctively patting her mother’s lifeless body in an apparent attempt to rouse her.

She died from asphyxiation after a piece of clothing was stuffed in her mouth to prevent her from screaming and her nose held so tight that she could not breathe.

Downstairs her husband — known as Babis, who trained as a helicopter pilot in the UK — was tied up on the floor and had only managed to raise the alarm by using his nose to dial the number of the police on his mobile phone and call a neighbour. 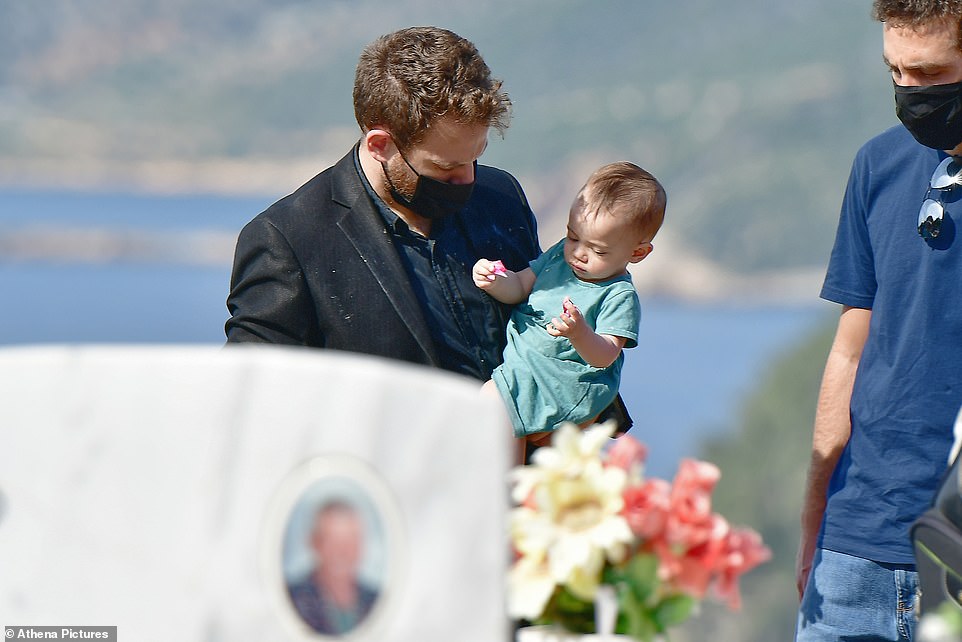 Charalambos Anagnostopoulos, known as Babis, holds his daughter Lydia at the funeral of his wife Caroline Crouch this week 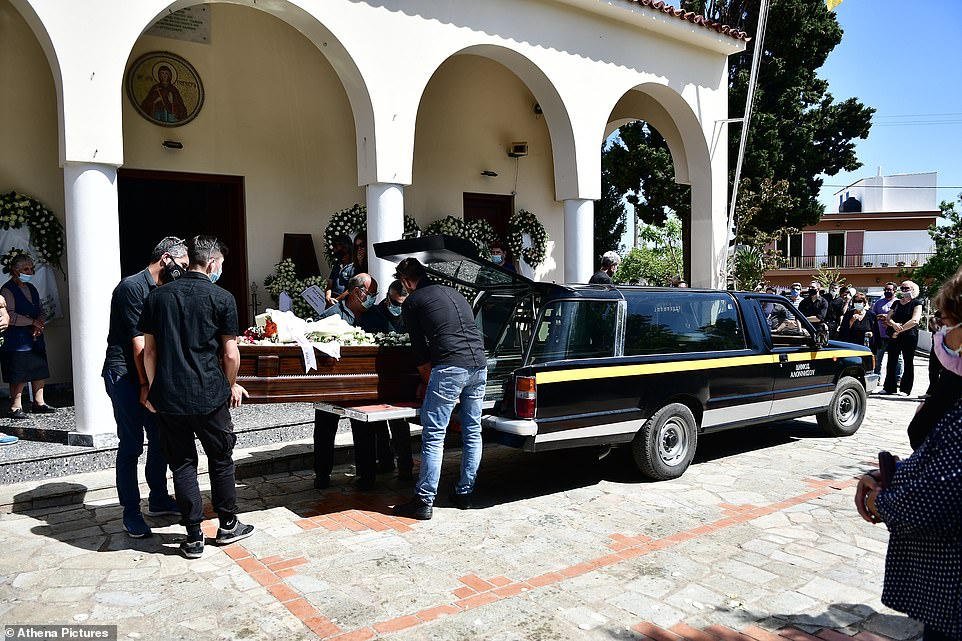 Caroline Crouch, 20, is carried into the Agia Paraskevi church in an open casket for her funeral on the island of Alonissos 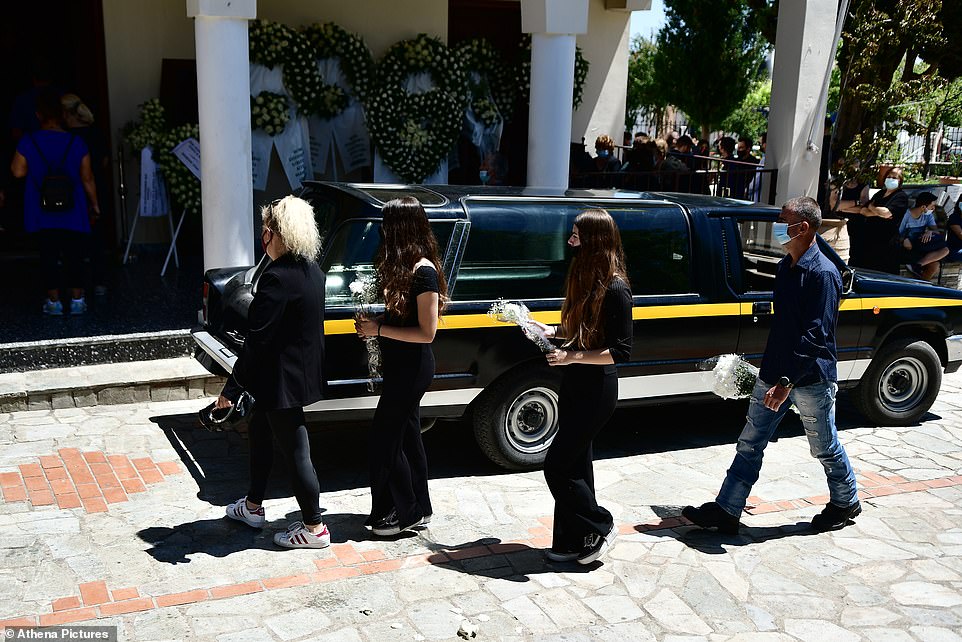 Almost every inhabitant of Alonnisos flocked to the island’s Agia Paraskevi church to pay their respects to Caroline Crouch, the young Briton who they had adopted as their own 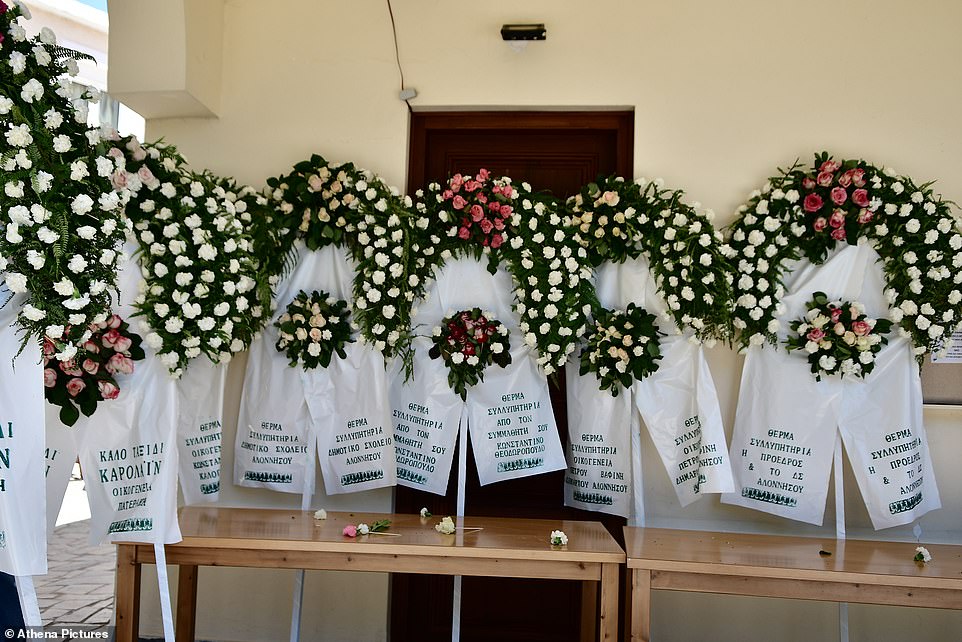 And, hanging in the stairwell, was the gang’s grisly calling card — the family’s pet dog Bruno, who had been strangled with his own lead; it was as if the perpetrators were revelling in their own barbarism.

This was a scene akin to a movie or TV plot, not the upmarket Glyka Nera neighbourhood.

But was such a robbery so unusual? It seems not. The Mail can reveal that there have been at least three burglaries in the area in the past six months, where extreme violence — or the threat of such — has been a hallmark.

In December, four men broke into a house in nearby Chalandri, dragged a female occupant by the hair, before threatening to slit her throat and escaping with £8,000 in cash and jewellery. The similarities with the most recent robbery are stark. Four men were involved in both break-ins. In both cases they entered the property through a back window. On both occasions, they stole cash and jewels.

Caroline’s killers also made off with £20,000 of jewellery and around £10,000 in banknotes which, it has now emerged, was hidden in a Monopoly box, leading detectives to explore the theory that the burglars may have been acting on a tip-off.

Could someone the couple knew have betrayed them or were they just the victims of random fate?

There is something else these home invasions have in common. The authorities suspect Albanians were responsible, a police source told the Mail.

Greece shares a border with Albania and more than one million Albanians live in the country. There are currently more than 200 outstanding arrest warrants for Albanians, who are believed to have fled back to their homeland.

Albanians claim they have been made scapegoats in the past which, in turn, has led to protests by the Albanian government and calls for the protection of Albanian immigrants.

Nevertheless, the link between Albanians and violent and organised crime — such as human trafficking, extortion and robbery — all over Europe is undeniable. So, yes, there is anger as well as grief over Caroline’s merciless killing.

‘Greek public opinion shocked by vicious crime’ is how the state broadcaster summed up the country’s response to the atrocity on its website. 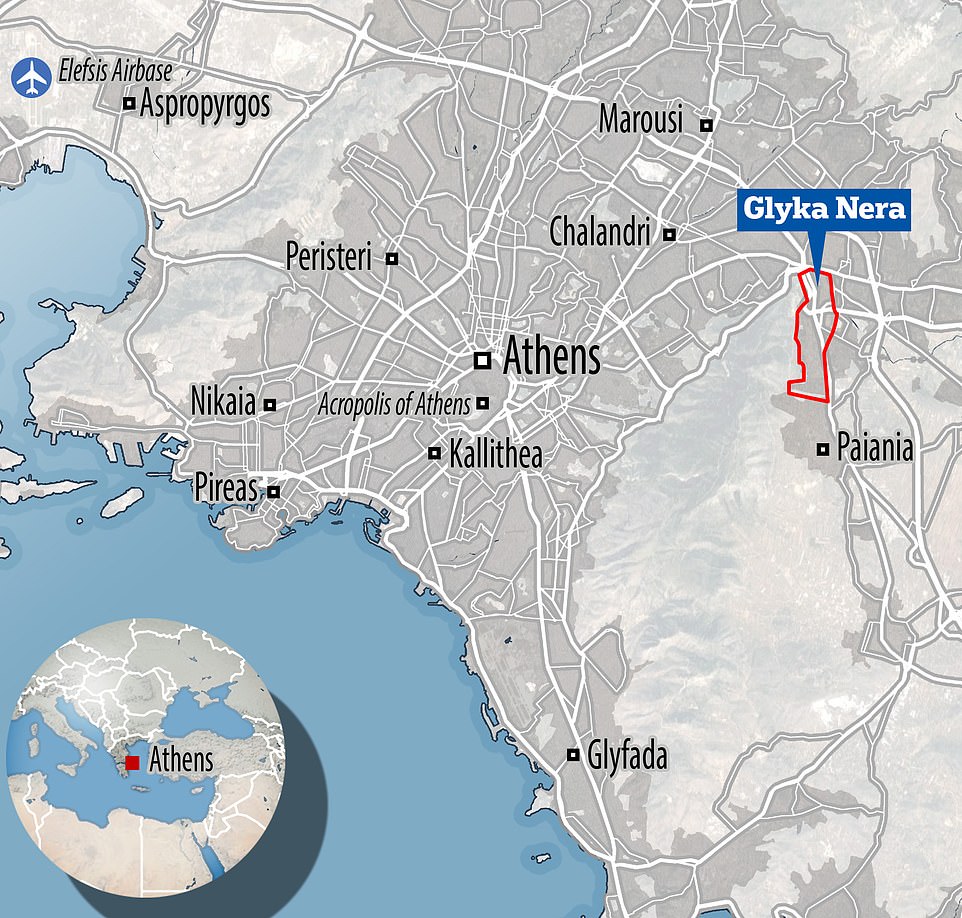 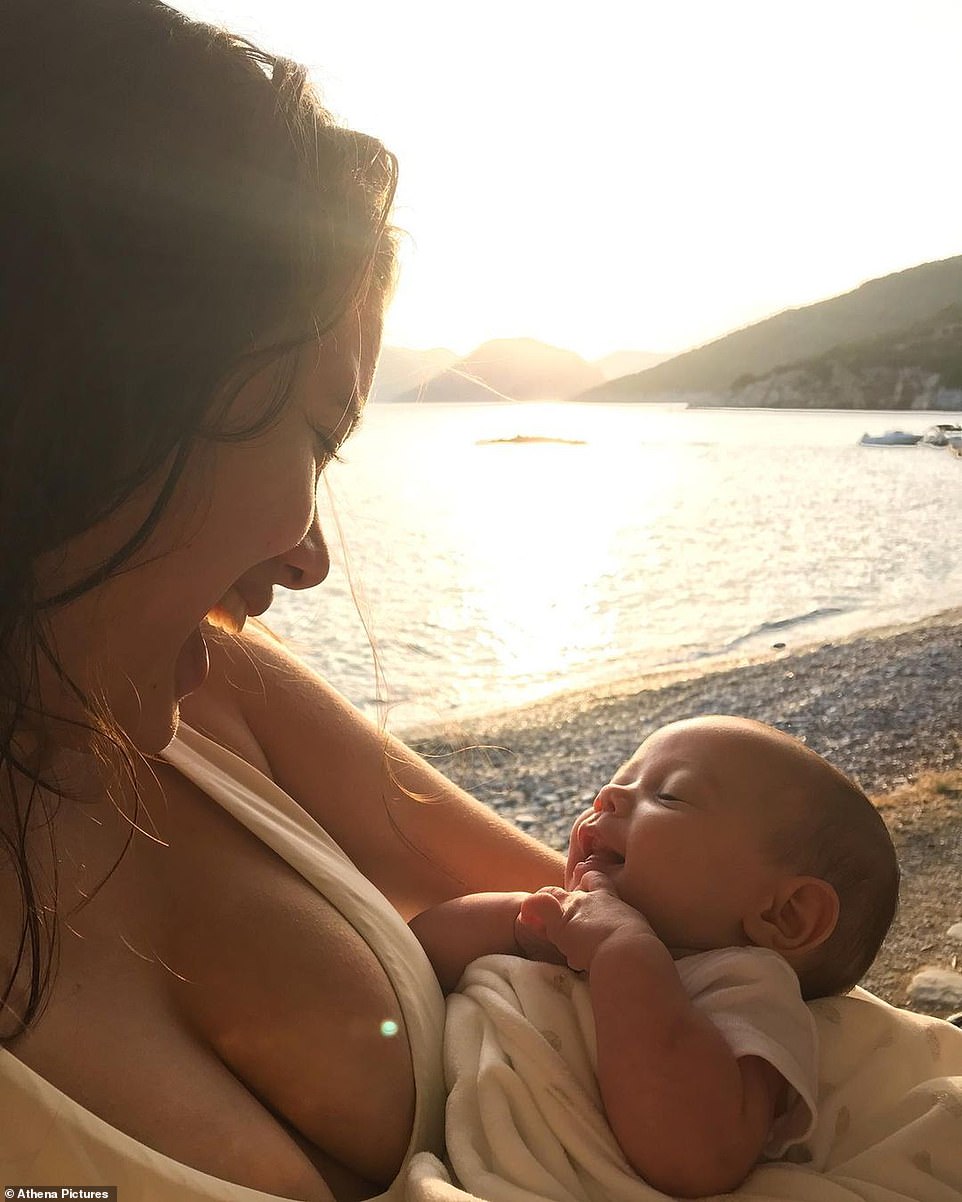 Almost every inhabitant of Alonnisos flocked to the island’s Agia Paraskevi church to pay their respects to Caroline Crouch, the young Briton who they had adopted as their own. Pictured: Caroline with her baby daughter Lydia 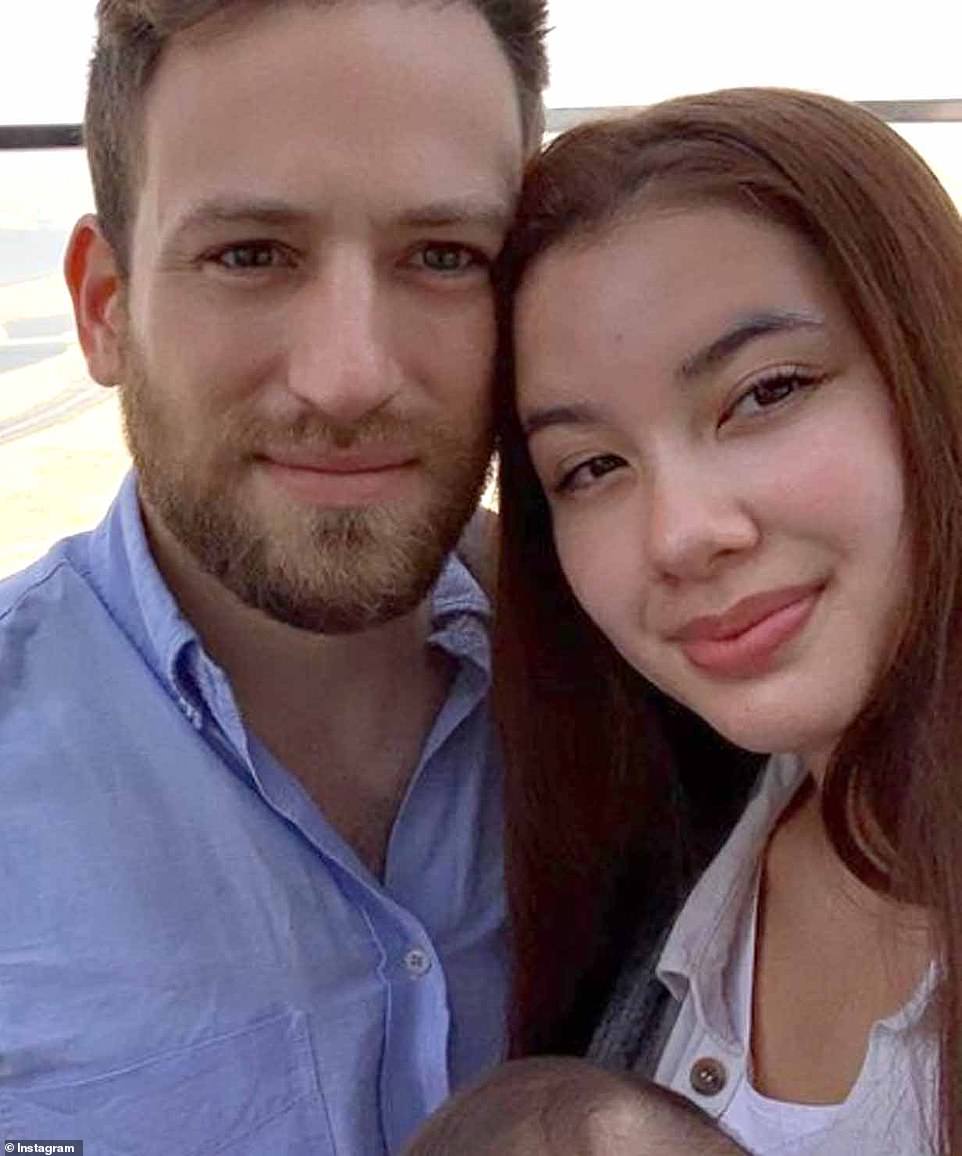 The murder of Caroline Crouch, pictured with Babis Anagnostopoulos, was described by police as one of the most ‘heinous’ crimes ever investigated

Caroline’s funeral was held on Alonissos, where she and her family moved to when she was eight. She attended the local school, joining a younger class to help improve her Greek. She excelled at sport and amateur dramatics, taking part in many school plays and island events, and was a member of the local kickboxing club.

After graduating from the University of Piraeus in Athens, where she studied statistics, she worked as a high school teacher.

It was on Alonissos — just across the sparkling water from Skopelos, where Mamma Mia! was filmed — that she met her future husband four years ago. They married in May, 2018.

In June last year Mr Anagnostopoulos announced the ‘best day in a man’s life’ with the birth of their daughter. Police spokesman Theodoros Chronopoulos said what happened in their Athens home was one of the most ‘heinous’ crimes he had ever investigated. ‘We’ve seen several other ugly murders throughout the year,’ he said. ‘But this was extremely brutal and violent.’

The gang, masked and armed with pistols, broke into the house through a downstairs window at around 5am on Tuesday. Three of them went inside and one stood watch outside.

Mr Anagnostopoulos was blindfolded and tied to a chair. Caroline, who was upstairs in bed with little Lydia, was bound and gagged. The family’s next-door neighbour tearfully recalled to the Mail the moment Mr Anagnostopoulos rang her — using his nose, we now know, to dial his mobile phone.

‘I answered the phone and Babis was screaming and screaming but I couldn’t understand anything he was saying because he was gagged,’ the neighbour, who did not wish to be named, told us. ‘I ran outside and the police were already arriving, so I knew right away it was very serious. They brought Babis and Lydia out shortly afterwards. 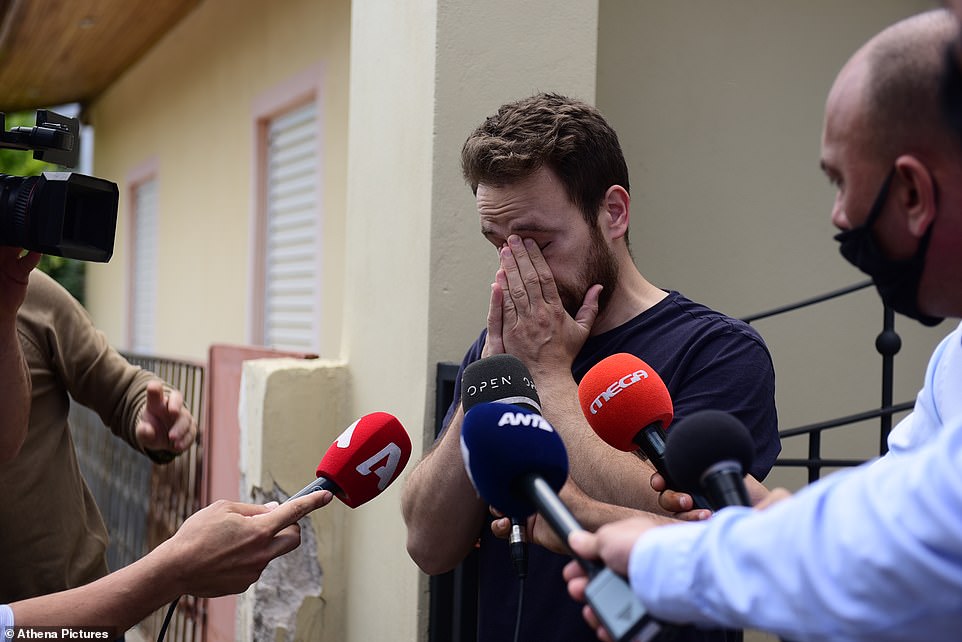 Mr Anagnostopoulos weeps as he speaks to reporters outside the family home in Athens on Thursday, saying he did not know his wife was dead until police arrived and took his blindfold off 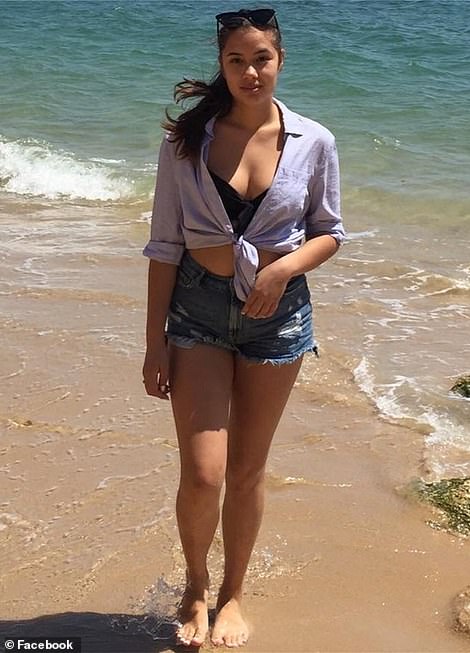 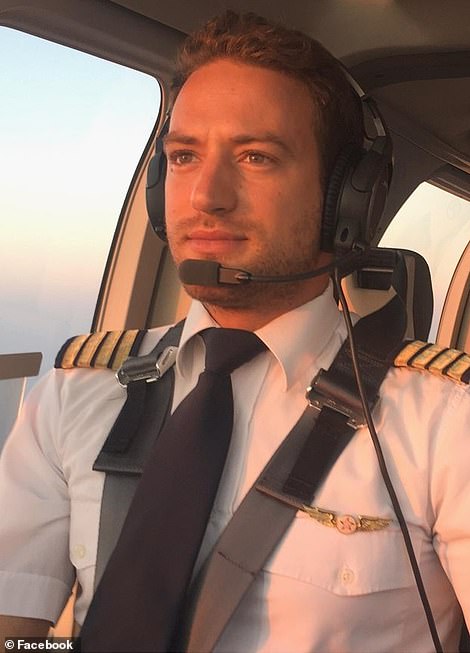 Burglars broke into the home of Caroline Crouch (left) and husband Charalambos ‘Babis’ Anagnostopoulos (right), strangled her and then fled with £35,000 in cash and jewellery 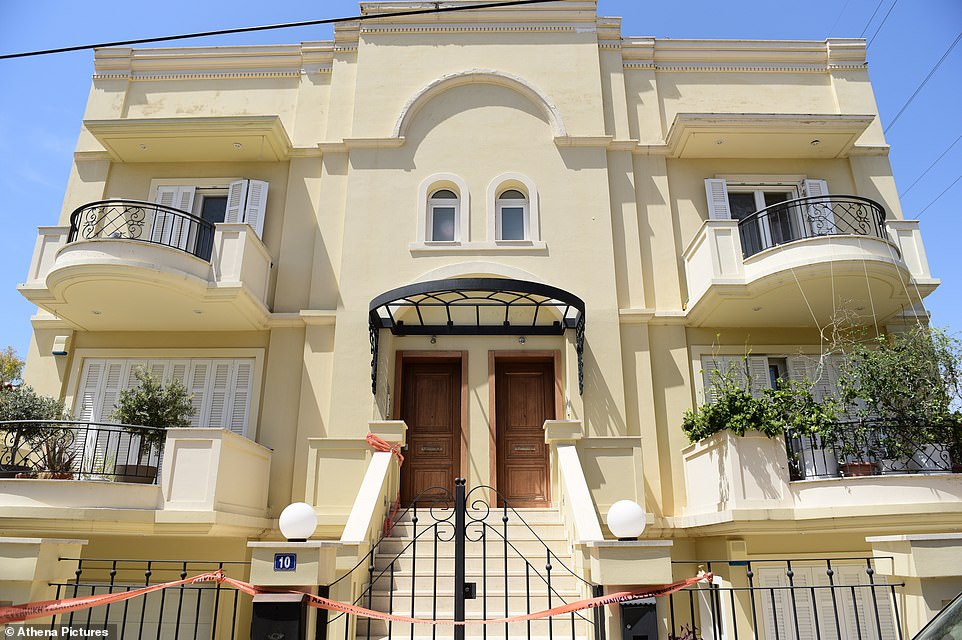 Police have described the crime as the ‘most heinous’ they have ever investigated, and say it was carried out with a ‘brutality’ that is rare in Greece. Pictured: the house (right) where the murder took place

‘He was completely in shock. He couldn’t speak. I brought him a blanket. I’d heard the dog barking earlier in the night [before the pet was strangled] but although it was unusual for him to make a noise, as he is normally so quiet, I assumed he was just fighting with the cat.’

The robbers, it seems, left one vital clue. Mr Anagnostopoulos said they spoke in broken Greek; they were probably not native Greeks, in other words.

Detectives have now drawn up a so-called ‘red list’ of violent criminals who are being investigated for links to the robbery.

The Albanian connection is a major line of inquiry, according to a police source.

Apart from the recent spate of robberies, they are suspected of carrying out a string of other raids going back several years.

In the summer of 2019, three Albanians are thought to have broken into an apartment in the Athens suburb of Peristeri where a woman was living with her 12-year-old daughter. The mother was beaten unconscious and they stole whatever they could find.

In the same year, an elderly couple were targeted in Ioannina, the closest Greek city to Albania. The husband was tied up and attacked and died in hospital from head injuries sustained in the robbery. Cash and jewellery was stolen —just like the raid which ended with Caroline’s murder.

Back on Alonissos, former schoolfriends wept and hugged outside the hilltop church. A note on a wreath said poignantly: ‘Our darling Caroline, you left us too soon.’

‘The whole island is shocked. We are all numb,’ said family friend Kostas Mavrikis. ‘This was a family that everyone knew. Caroline was present at almost every event on the island. She always liked to participate in many different things. She was always so cheerful, warm and open. Many times she went out with my daughter and she always had this smiley, friendly attitude towards everyone.’

Police have offered a reward of £280,000 for any information leading to the arrest of Caroline’s killers, who have left a baby without a mother.

Could there be a more pitiful and heartbreaking waste of a life?