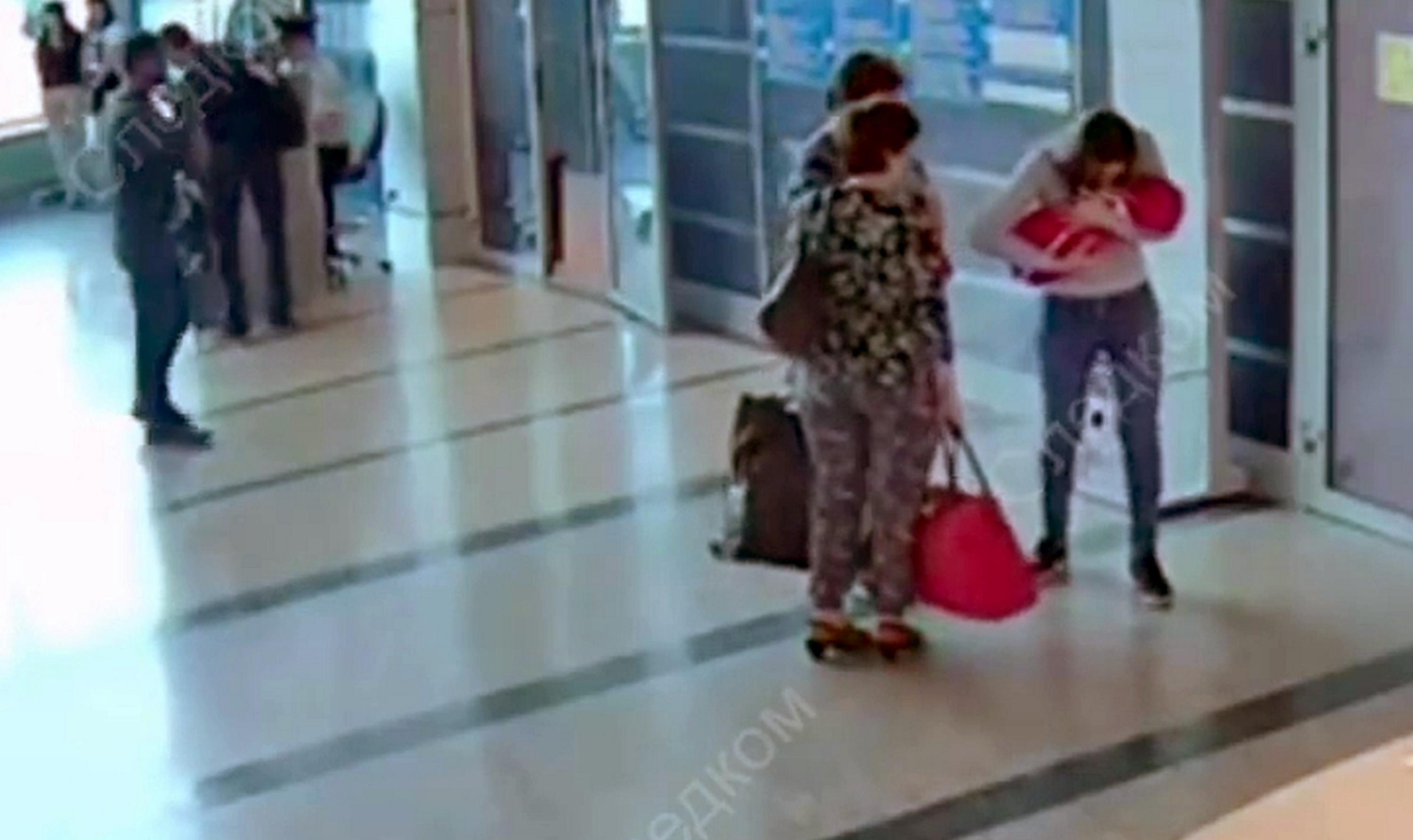 She walks around seemingly counting every last precious second she has with her tiny girl.

The unemployed painter at one point turns her back on Natalia Zhdanova, 43, who has flown 1,970 miles from St Petersburg to collect the baby.

Inna kisses her daughter for the last time and hands over the child, kept warm in a bright pink wrap.

Natalia then used a faked birth certificate – which listed the baby as hers – to show airport security before flying back to her home city with the child. 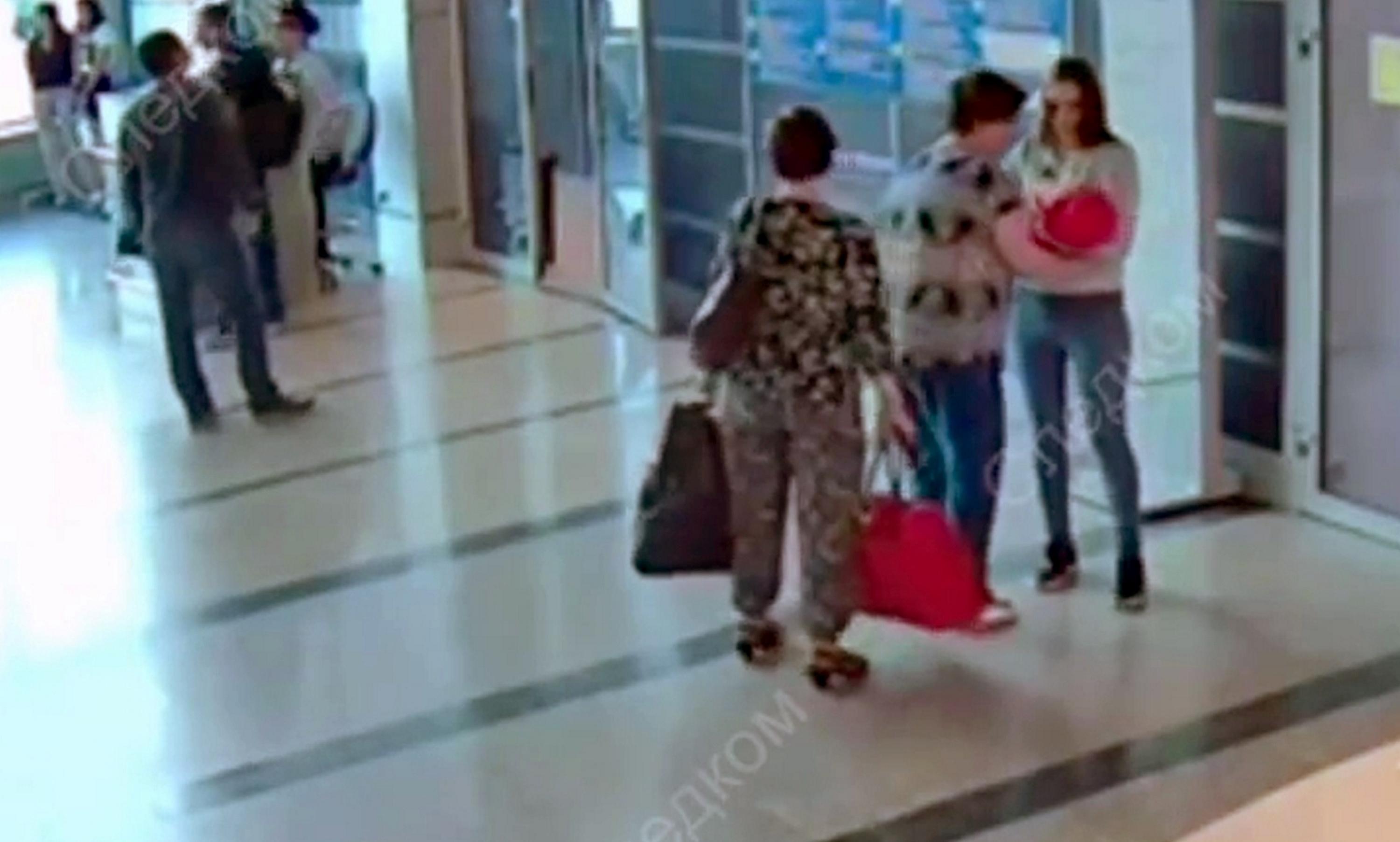 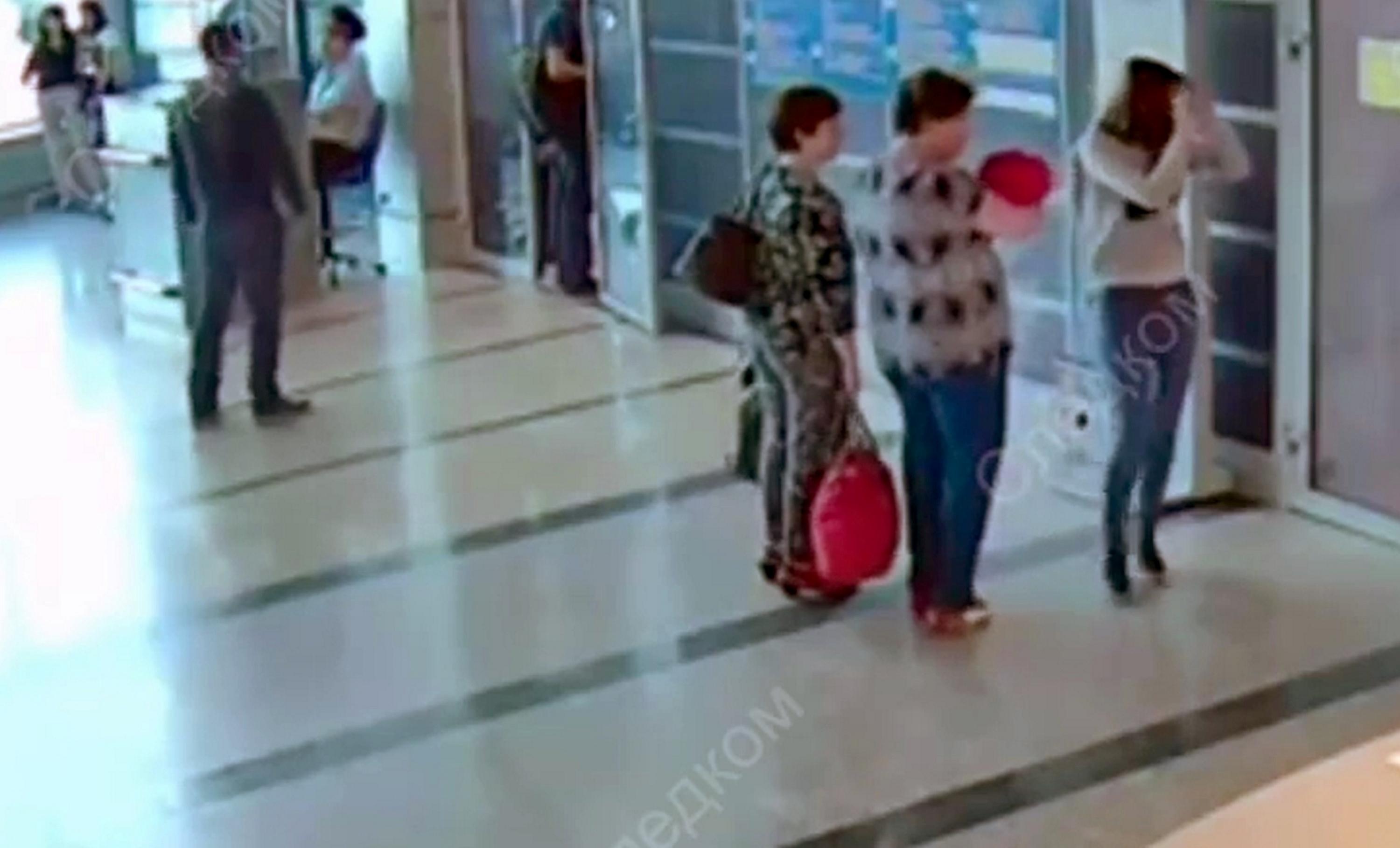 Inna – who later said she was “hysterical” at giving away her child – is seen wiping tears from her eyes on the video, released by the Investigative Committee, which probes serious crimes in Russia.

She now admits she was wrong and says she wishes she could wind back the clock.

Now both women have been detained as a criminal probe is launched under Russia’s child trafficking laws and each could face up to ten years in jail.

Investigators say Natalia was “desperate" to raise another child after her adult son left home.

She posted an online ad saying: “Hi everyone! My husband and I would very much like to get a baby aged 0 to 3 months.

“All the documents for adoption are ready. Please send a private message for details. Girls, darlings, please help.”

Inna – at the time pregnant after a short relationship with a man she met at a local cafe – replied: “Hello, I would like my daughter to be adopted.

“Please do so, I am not able to raise her, no chance.” 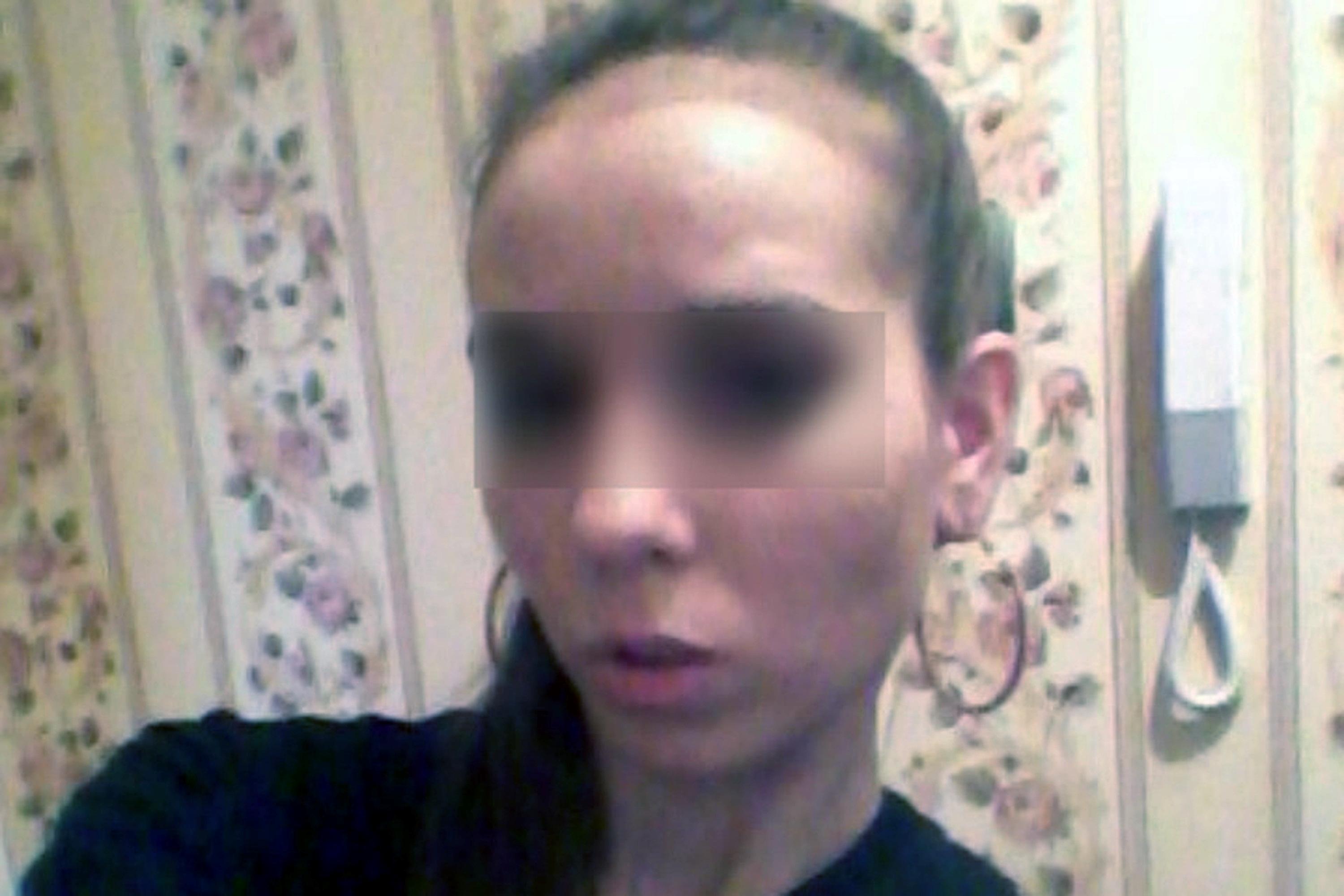 She told police she lived with her mother and sister in a cramped apartment and the other two women were furious when she became pregnant.

Omsk prosecutor Vasily Gumenyuk said: “During our interrogation, the biological mother of the baby explained that she lived in a rented apartment with her mother and sister.

“Both were strongly against the baby and put strong psychological pressure on the future mother.”

The baby deal would have remained secret but for Inna and her mother telling their landlady – who immediately informed police.

She admitted she could have given the child up at her maternity hospital but chose not to and instead to hand the baby to Natalia who she had not previously met. 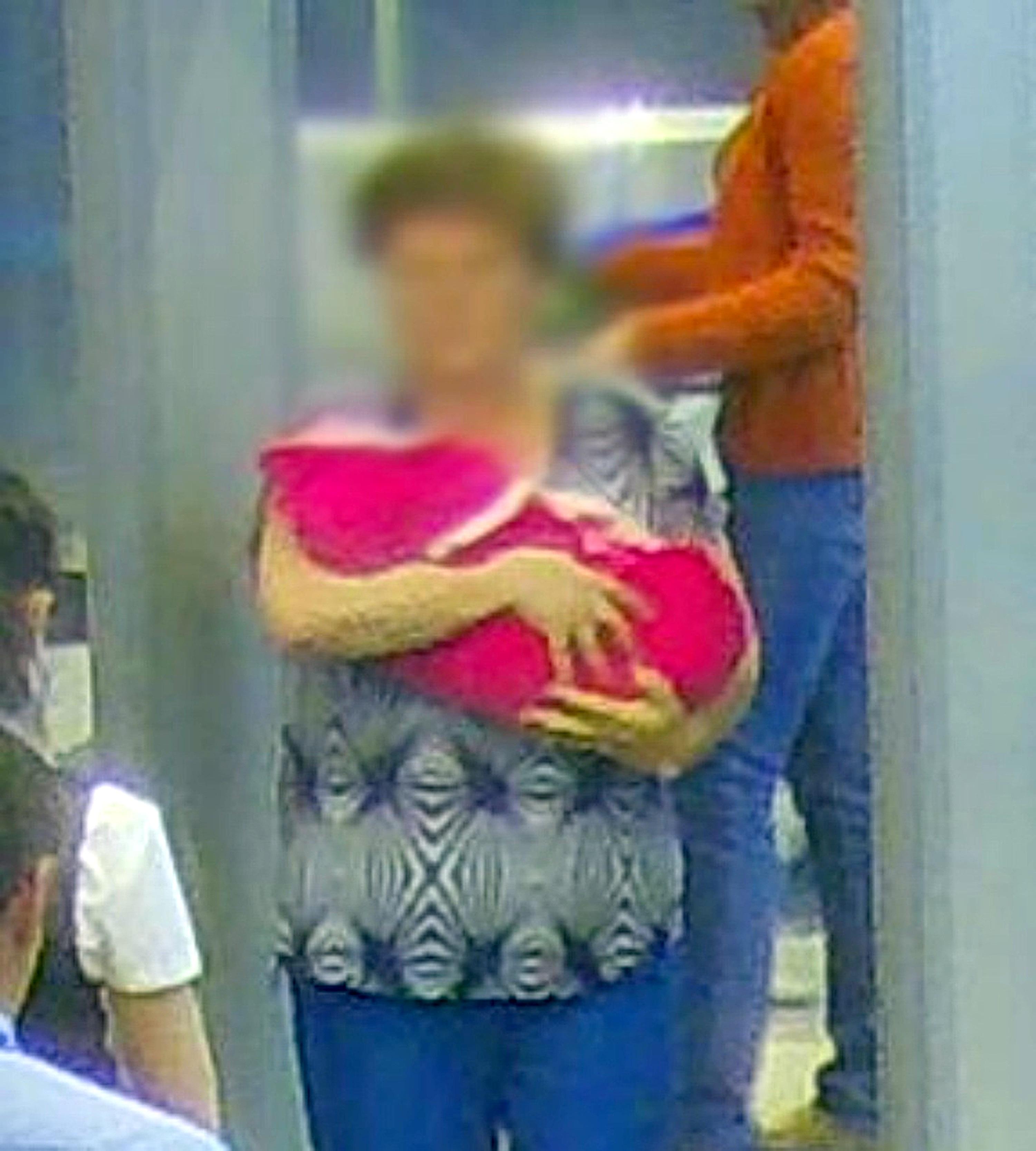 She said she was paid 3,000 roubles – just £34 – sent in advance allegedly to cover the cost of nappies.

But she claimed Natalia also promised to help her and her family find jobs in St Petersburg.

Asked about the moment she handed over the child, she said: “Of course it was hard.

“I was in hysterics in the airport when it happened.

“But Natalia’s return flight has already been announced – I had to give her my daughter so (she and her friend) could catch their plane.”

Inna added: “The father of the baby was not interested before but now he says, ‘give me the baby, I will take care of her’.

She said: “Most likely, I will never see my baby again…

“If only could I go back over everything, I would not have given her away.”

The child is now likely to be put in an orphanage.

Natalia told police that she had planned to try and legally adopt another baby.

But she said the rules on her living conditions and salary would have meant she was not qualified.

The women were both detained as suspects under Russia’s child trafficking laws.

They are held under house arrest pending completion of the criminal investigation.