With ‘unflinchingly high standards’, breathtaking prices and a roster of satisfied customers including Russian bankers and Arab sheiks, the cabinet maker David Linley & Co can rightfully claim to be the most prestigious furniture firm in Britain.

There might be another reason, too, why the likes of Sir Elton John and Oprah Winfrey favour the London-based business and its brand of tasteful opulence, and that is because the man who oversees their purchases is no less a figure than the Earl of Snowdon, nephew to the Queen. As Linley & Co says, to pay £78,000 for a sofa is to invest in something ‘quintessentially British’.

It might then come as something of a surprise to the firm’s wealthy clientele that the company isn’t controlled by the Earl himself – the son of Princess Margaret known professionally as David Linley – but by an offshore firm whose main shareholder is a Malaysian tycoon with a brother at the heart of what has been described as the biggest corruption scandal in the world. 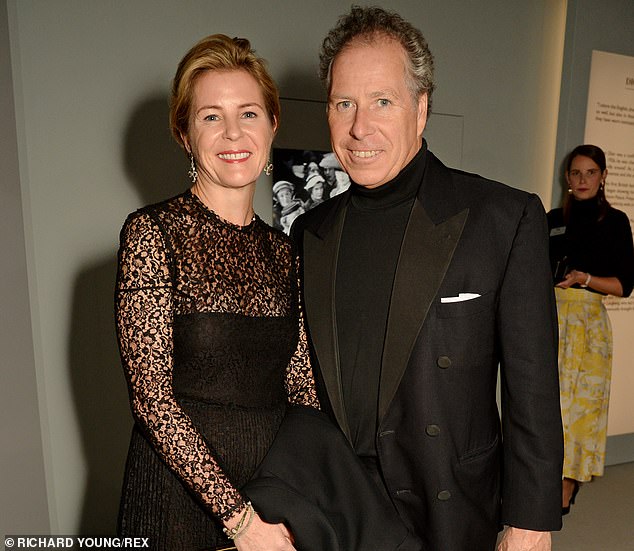 Last week it was announced that the Earl of Snowdon and Serena (pictured together), his wife of 26 years, are to divorce, with a painful division of their assets, estimated at £40 million, no doubt to follow

The Mail on Sunday has established that 76 per cent of the Earl’s company is co-owned by investor and board member Nazir Razak – and that Mr Razak is under investigation after his bank account was allegedly used for an illegal multi-million-pound payment from his brother Najib Razak, the disgraced former Prime Minister of Malaysia.

Nazir insists that he has acted in good faith throughout and has pledged to cooperate fully with an anti-corruption investigation.

Yesterday, he told The Mail on Sunday: ‘When the alleged links between 1MDB [the Malaysian state investment fund at the centre of the investigation] and Najib’s fund transfer surfaced in the media in April 2016, I took voluntary leave from my positions at CIMB [the Malaysian bank that held the money]. The idea that the funds that flowed through the account may have originated from 1MDB has been gut-wrenching for me.’

Last week it was announced that the Earl of Snowdon and Serena, his wife of 26 years, are to divorce, with a painful division of their assets, estimated at £40 million, no doubt to follow.

Known as Viscount Linley until the death of his bohemian photographer father in 2017, the Earl will be keeping a close eye on the corruption scandal in Malaysia – an affair that has seen millions of pounds disappear from the state investment fund amid allegations that the missing loot has been spent on private jets and lavish parties. 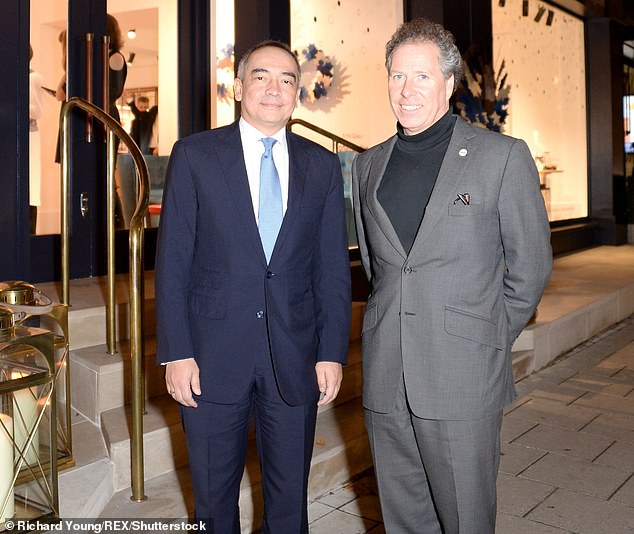 Scrutiny: The Earl of Snowdon with Nazir Razak at Linley Belgravia, London

The latest accounts of Linley & Co show that it has substantial bank loans, that it has run up an operating loss of more than £3 million in the last two recorded years, and that, according to auditors, there is ‘material uncertainty’ over its future. Naturally, there is no sign of this in the glossy Linley catalogue, which displays items created from such exotic materials as quilted maple and fumed eucalyptus. The £78,000 Alba sofa, for example, ‘is crafted with mango veneers and embellished with geometric patterns morphing into straight grain, featuring ornate marquetry of jasmine flowers in mother of pearl, quilted maple, figured sycamore and satinwood’. It seats two.

Then there’s a surfboard, featuring American walnut, ripple sycamore, fumed figured eucalyptus, dyed figured anegre (an African hardwood), dyed American tulipwood and birdseye maple. At £30,000, it promises to ‘catch the eye both in and out of the water’.

At the other end of the price range are £95 Linley Bricks in a choice of oak or walnut.

Despite his seniority, the Earl is not a working Royal and was never a Royal Prince. But he was given the courtesy title Viscount Linley in the hope that he could find his own direction, and that is exactly what he has done. In 1981, at the age of 20, he established his own business making and selling upmarket furniture.

At first, his choice of a life in ‘trade’ was derided in society circles, but such snobbery only made him more determined. Money, he once said, ‘drives’ him and ‘always has’. In 1990, his mother gave him Les Jolies Eaux, a house with ten acres on Mustique, given to her as a wedding present by Lord Glenconner. It was her favourite place on earth but her son very controversially sold it seven years later for £2.4 million.

An Aston Martin DB5 – the famous James Bond model, this one purchased from actor Peter Sellers – which had been given to Snowdon by his father, was sold, too.

In 2006, four years after his mother’s death, the Earl set about auctioning her belongings at Christie’s, ostensibly to pay a £3 million inheritance tax bill. The sale raised £13.7 million. He even auctioned his mother’s favourite Pietro Annigoni portrait of herself, a sister painting to the one of the Queen hanging in the National Portrait Gallery. 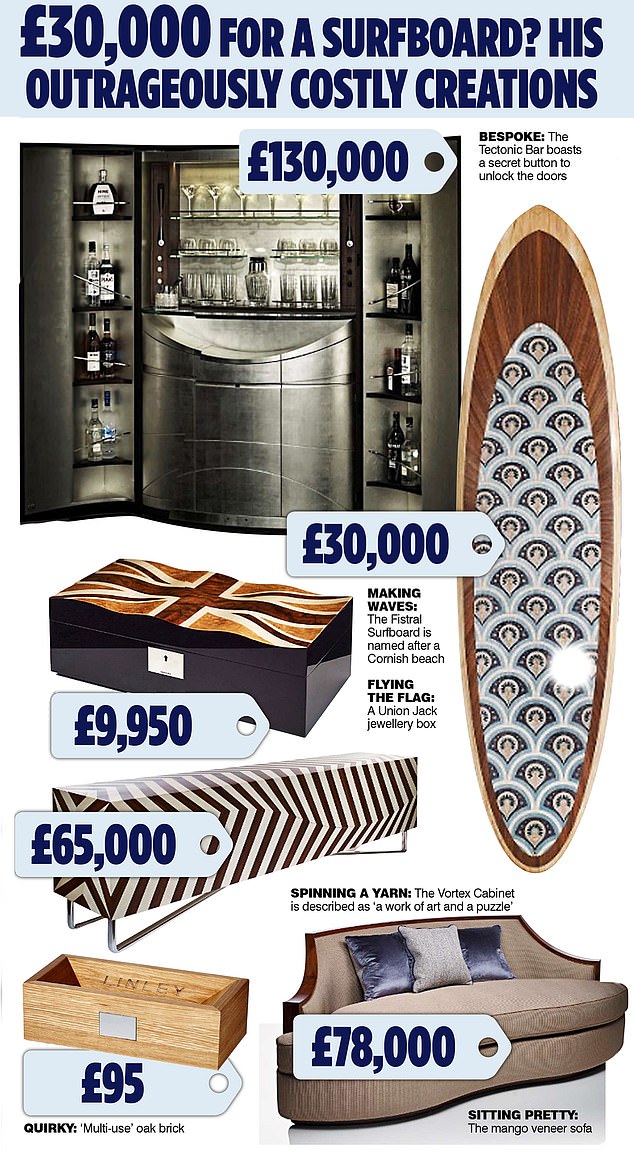 Aware of its sentimental value, he ordered three copies from a specialist firm in Dorset – for himself, for his sister and for the Queen.

Yet when the hammer went down at £680,000, it emerged that the Earl himself had bought it. At first it was assumed he’d had second thoughts. His motives might have been more hard-headed, however.

For it emerged that, examining the painting under a microscope, the copyists had made an astonishing discovery: the artist had hidden not just a tiny self-portrait in the painting but, hanging on a leaf, a glass tumbler containing a dark heart, referring to Princess Margaret. She had sat for Annigoni after her break-up with Group Captain Peter Townsend, the man she had hoped, as a young woman, to marry.

With such emotional detail, the portrait was suddenly considered more valuable than the pre-sale estimate. In 1993, Snowdon had married Serena, whose father, the Earl of Harrington is said to have a £250 million fortune.

For all its high profile, his company has not been hugely profitable. Hit by the 2008 financial crisis, the Earl announced that he had taken a £400,000 loan from Sergei Pugachev, once known as the Kremlin’s banker. But Pugachev left the company in 2011 and, accused of embezzling £655 million by the Russian government, fled to France.

Today, Overture’s holding stands at 76 per cent. The latest Linley accounts filed in 2018 confirm that ‘M Razak… is regarded by the directors as the ultimate controlling party’. For how much longer this will be the case remains to be seen, as Razak has had to deal with the fall-out from his brother’s actions – and is accused of facilitating an illegal payment from Najib.

As Prime Minister, Najib had launched the Malaysian state investment fund known as 1MDB, saying it would strengthen the country’s economy. But prosecutors now say he stole £3.5 billion to fund a lavish lifestyle with his wife Rosmah Mansor. According to US and Malaysian prosecutors, the money lined the pockets of a few powerful individuals and was used to buy luxury real estate, a private jet, Van Gogh and Monet artworks.

It has been alleged that the Malaysian funds were also improperly used to fund Leonardo DiCaprio’s Oscar-nominated film The Wolf Of Wall Street, the plot of which is coincidentally based on fraud.

Najib is facing corruption charges including criminal breach of trust, abuse of power and money laundering. He denies the allegations. In October, it emerged that the bank account of his brother Nazir had received £4.7 million (25.7 million RM) in 2013 from the fund. Nazir insists that he acted in good faith and has pledged to co-operate fully with the anti-corruption investigation.

He says that he didn’t spend a penny of the money he received and believed it was legitimately transferred for the purposes of political donations to help with his brother’s 2013 election campaign.

He has since taken voluntary leave of his position as chairman of CIMB, the Malaysian bank that held the money, but remains a director of David Linley Holdings and a visiting research fellow in transformational leadership at Oxford University’s Blavatnik School of Government.

Yesterday, he told The Mail on Sunday: ‘When the alleged links between 1MDB and Najib’s fund transfer surfaced in the media in April 2016, I took voluntary leave from my positions at CIMB in order for the boards of CIMB Group and CIMB Bank to conduct a full review of what transpired.

‘They did so with the help of an accounting firm and a legal firm. I was subsequently cleared and invited back to the board.

‘I have been a vocal and frequent critic of 1MDB, and the idea that the funds that flowed through the account may have originated from 1MDB has been gut wrenching for me. I intend to engage with the Malaysian Anti-Corruption Commission to resolve this matter. I fully respect the work that they are doing to recover 1MDB funds, and will assist as best as I can.’

Nazir, a Chelsea fan who has been staying in Britain to pursue his work at Oxford University, recently travelled to Morocco for a family holiday.

‘At last some sun! Half-term escape from stormy UK,’ he writes on his Instagram page. Escaping the clouds now looming over the luxury furniture business might not be so straightforward.