Dogs find comfort in ‘lookalike’ miniature dolls of their owners

It is the latest accessory for pampered dogs to get their paws on – dolls designed to remind them of their owners.

The soft toys are custom-made to resemble a miniature version of family members and are meant to comfort canines who pine for their owners when they are absent.

They are being trialled by pet-sitting company DogBuddy, which says that 93 per cent of owners worry their dog will miss them when they travel.

Chris Attwood tested out the toys on his two-year-old whippet Dot when he went on holiday with his wife Sophie and his sons Casper, four, and Ted, ten months. His verdict? ‘They appeared to settle her a bit.’ 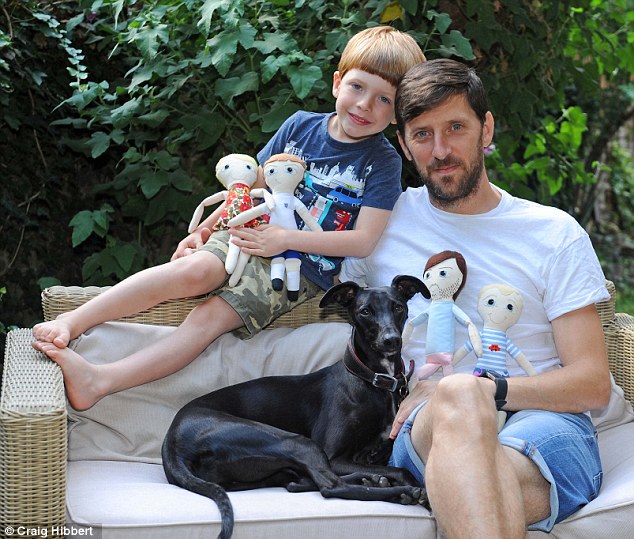 Chris Attwood and his four-year-old son Casper with their dolls, and whippet Dot. The soft toys are custom-made to resemble a miniature version of family members

He added: ‘Dot is quite an emotional thing, so leaving her is stressful and you’re always a bit worried. It was quite nice to know we were doing something for her.’

Mr Attwood described the dolls as ‘quite funny’, adding: ‘You can recognise us.’ And he said that while Dot’s toys are usually ‘roughed up a bit, she doesn’t treat these dolls like a normal toy.’

DogBuddy, which calls its service Woof You Were Here, makes the lookalikes after users upload their photographs online.

Founder Richard Setterwall said: ‘By leaving behind miniature versions of their family for their dog and its sitter, we hope that people are able to relax on holiday without worrying if their dog is missing the family.’

But animal behaviour experts expressed scepticism over the idea. Ryan Neile, from the charity Blue Cross, said: ‘Dogs are highly intelligent – they know the difference between inanimate objects and a living person.’