DOMINIC LAWSON: Yes, Mrs M is in trouble. But it’s Merkel, not May…and her crazy immigration free-for-all could destroy the EU, too

Scarcely a day goes by when we don’t hear of the desperate struggles of Theresa May to unite her own party (let alone Parliament) over the Brexit negotiations, and of her humiliations in those negotiations at the hands of a formidably united European Union.

Yet the female leader whose political future hangs in the balance this week is not the British Prime Minister but the German Chancellor, Angela Merkel.

And the issue threatening to unseat the woman who has led her country for the past 13 years also presents a fundamental challenge to the EU itself (or at least its treasured Schengen policy of visa-free borders). That issue is immigration.

Combine that with the arrival of a so-called ‘populist’ Italian government which proposes to defy the fiscal rules governing membership of the single European currency (‘If the euro fails, Europe fails,’ says Mrs Merkel) and it’s clear Mrs May’s problems are almost paltry compared to those of her opposite number in Berlin. 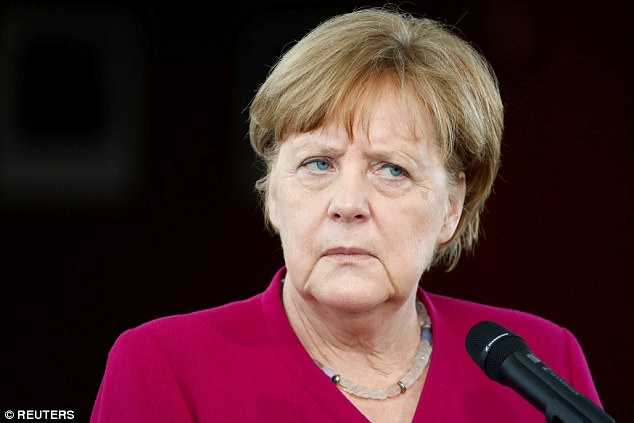 The female leader whose political future hangs in the balance this week is not the British Prime Minister but the German Chancellor, Angela Merkel

The immediate threat to Merkel — which even some of her allies have said could topple her this week — comes from her interior minister, Horst Seehofer. He now runs the country’s immigration policy and was, from the start, a severe critic of Merkel’s decision in 2015 to open Germany’s borders to an indefinite number of asylum seekers from the Syrian civil war (or, in practice, those without papers claiming to be asylum seekers).

Seehofer, whose Christian Social Union is the Bavarian sister party of Merkel’s Christian Democrats, has said that from this week he will instruct German border guards to send asylum seekers back into neighbouring countries — notably Italy, where a large proportion will have landed first in Europe. This is especially sensitive for Seehofer: proudly conservative Bavaria is the southernmost state in Germany, and the CSU is, not coincidentally, facing a potentially terminal threat from the far-Right Alternative fur Deutschland (AfD).

But it’s not just CSU party members who back Seehofer’s line: an opinion poll last week indicated that almost two-thirds of the country does, too.

Merkel insists that Seehofer’s proposal is counter to EU law and would pile further pressure on the member states on the Mediterranean, which are already reeling under the influx of migrants from North Africa and beyond. 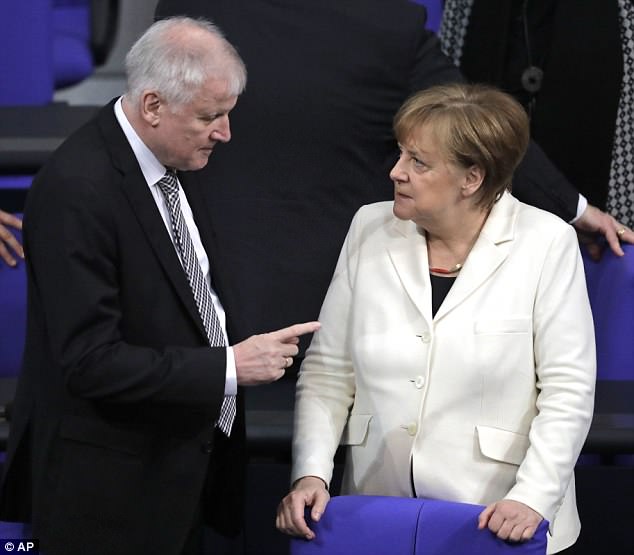 But if Seehofer does not back down, Merkel would have no choice but to sack him, which would capsize the fragile governing coalition that took her almost half a year to put in place.

That fragility was the direct result of the fact that Merkel’s CDU party, in last year’s general election, had its worst result since 1949. That, in turn, represented the voters’ anger at Merkel’s decision to let in upwards of a million migrants: they reacted by defecting from the CDU to the AfD, in numbers that would not long before have been unthinkable — far-Right parties in Germany, for obvious reasons, had only tiny levels of support since the apocalyptic end of Nazi rule: yet the AfD’s co-leader, Alexander Gauland, this month dismissed that period — and by implication the Holocaust — as just ‘a speck of bird poop’. Thus speaks the head of Germany’s third-largest party.

According to people who talk to her most often, Merkel is increasingly detached from day-to-day matters, and instead wonders aloud about her place in history. Well might she worry about that, as it is possible that she will go down in the history books as the German leader who fractured the EU.

While she is justified in believing it would cause consternation in the southern European states if Germany blocked migrants along the lines proposed by Seehofer, her interior minister is also correct in blaming the Chancellor for making the migration crisis far worse by inviting them all in.

Seehofer last Friday told the daily newspaper Suddeutsche Zeitung that her decision in the late summer of 2015 had ‘split Europe’. In particular, the Eastern European nations — especially Hungary — were outraged at her subsequent forcing through of a Brussels-backed plan to make all EU member states take a proportion of the Middle Eastern migrants. After all, countless thousands might never have taken that perilous journey in gangster-operated boats across the Mediterranean had they not heard Merkel’s rallying cry: ‘Wir schaffen das!’ (‘We can do this’).

If the results of what became known as the ‘Willkommen heard around the world’ do bring to an end its author’s remarkable career as the Western world’s most durable leader, we should ask why such an apparently cautious politician had taken so radical a decision.

It was most odd because Merkel always displayed a sure-footed technique in aligning herself with every fresh movement in public opinion, and an unmatched instinct for gaining and holding on to political power: indeed, the most familiar criticism of Merkel was that she had no discernible principles and was just a brilliant accumulator of minor political advantages, or an expert exploiter of her opponents’ weaknesses.

Some say that the plight of the refugees moved the Christian in Merkel. But she never expressed herself in these terms. Others say that, as an East German whose great career was only made possible by the ending of that dictatorship, she especially empathised with the desire of the refugees to escape an oppressive regime. But there is all the difference in the world between reunifying a nation artificially divided by the Cold War, and the mass transplantation of people with a completely different culture, and indeed language, into a country — Germany — which is more homogenous and parochial than, for example, the UK. 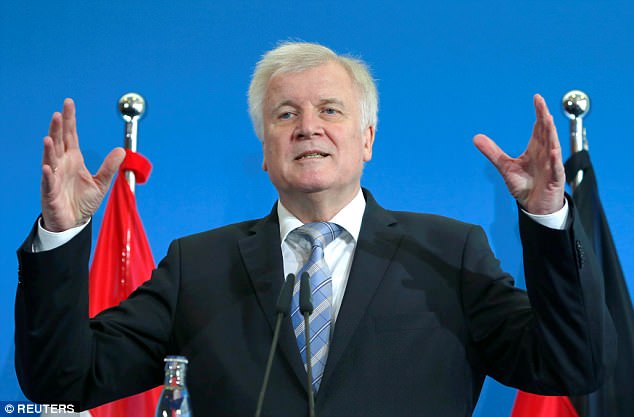 Another suggestion was put to me at the time by someone I met at the German Embassy, who counted himself a friend of Merkel. He told me she was very worried about the fact that Germany’s population was shrinking, and was jealous of the UK’s demographic expansion, believing these diverging trends would see Britain replace Germany as Europe’s biggest and most successful economy.

Well, possibly: but it’s a bizarre way to deal with that by opening the borders in one fell swoop — without knowing anything about the skills or character of those who might take advantage.

For what it’s worth, I think her decision was peculiarly personal, stemming from an incident in July 2015. Merkel, in a televised discussion with a group of 14-year-olds under the title of ‘Good Life In Germany’ was in effect ambushed by a schoolgirl, called Reem, who had come from a Lebanese refugee camp and said she was facing deportation.

The girl told Merkel, poignantly: ‘I have goals like anyone else. I want to study like them . . . it’s very unpleasant to see how others can enjoy life, and I can’t.’

When Merkel responded: ‘You’re an extremely nice person, but there are thousands and thousands in the refugee camps in Lebanon and if we were to say you can all come . . . we just can’t manage it,’ the girl started crying. Merkel stopped in mid-sentence, muttering ‘oh Gott,’ and walked over to offer comfort by (awkwardly) stroking the sobbing girl’s shoulder. 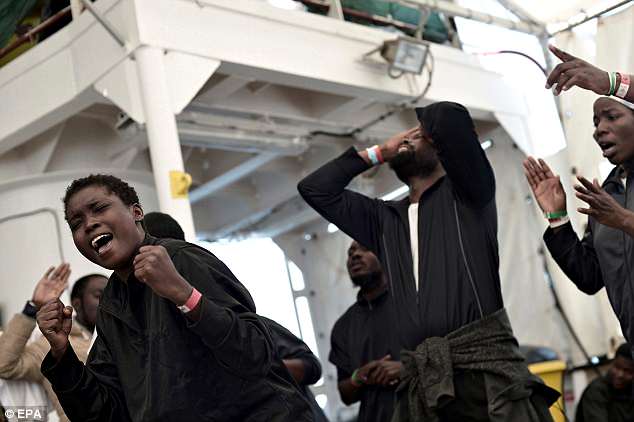 It was a searing experience for the Chancellor — and she was widely criticised in the German media for her supposed heartlessness. I suppose Merkel was scarred by that (unjustified) criticism and kept recalling this girl, as she heard of the plight of all those coming across the Mediterranean. Suddenly, it was not ‘we just can’t manage it’, but: ‘We can do this.’

The trouble was, the million and more who then came were far from all polite young women like Reem: the vast majority have been men — by no means all of them ‘extremely nice’.

No wonder Merkel is not just facing a terminal showdown with her own supposed political allies in Bavaria: she is also reaping the whirlwind within the EU, as it struggles to cope with the consequences of abandoning visas and passport checks, the borderless vision made real by the 1985 Schengen treaty.

The British prime minister at the time was Margaret Thatcher. She refused to sign the UK up to Schengen, arguing: ‘It is a matter of plain common sense that we cannot totally abolish frontier controls if we are also to protect our citizens from crime and stop the movement of illegal immigrants.’ How wise that now seems.

Mrs May would certainly think so. But perhaps it’s too late for Mrs Merkel.