DOMINIC LAWSON: Spare us this trio of nauseating Remoaners

DOMINIC LAWSON: Spare us Miliband, Clegg and Morgan, this trio of nauseating Remoaners who claim to put their country first!

Oh look, it’s David Miliband coming to our rescue. Today, at the Tilda rice mill in Essex, the former Labour foreign secretary is to launch a campaign to stop what he calls ‘hard Brexit’.

This marks Miliband’s return to the British political scene, after he stomped off when his younger brother Ed beat him to the Labour leadership in 2010. Since then he has been in New York as the President of the aid charity the International Rescue Committee: he clearly thinks we in the UK now need his help.

He will be joined in this venture by the former leader of the Liberal Democrats Sir Nick Clegg and the Conservative MP (sacked as education secretary by Theresa May) Nicky Morgan. 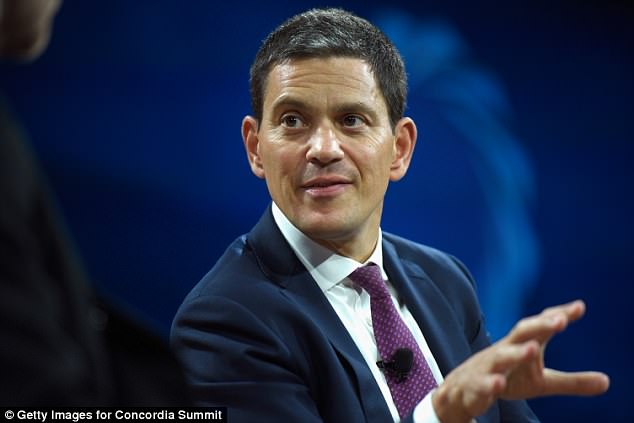 This marks Miliband’s return to the British political scene, after he stomped off when his younger brother Ed beat him to the Labour leadership in 2010. Pictured: David Miliband speaks at the Concordia Annual Summit at Grand Hyatt, New York

Indeed, when it came to the referendum of 2016, it was the leaders of the Leave campaign who put their careers within their parties at greatest risk. David Cameron made it clear to Michael Gove — when his then colleague said he would campaign for Brexit — that this was unforgivably disloyal, both to him personally and to the interests of the Conservatives.

Less morally robust Eurosceptic Conservative ministers sided with the Remain campaign purely on grounds of loyalty to their party boss (and in the belief that they would be on the winning side and rewarded by David Cameron).

On the Labour side, too, Gisela Stuart — who co-headed the Leave campaign — was subjected to vile abuse in the corridors of the House of Commons by fellow Labour MPs who regarded her as a traitor to the party (which, at least in parliamentary terms, was overwhelmingly pro-Remain).

It then came as a huge shock to them just how many of their constituents disagreed with them: the most adamantly pro-Brexit constituencies were in the Labour heartlands. Few more so than South Shields, David Miliband’s old seat. That corner of the nation split by 62 per cent to 38 per cent in favour of Brexit.

So when Miliband grandly instructs MPs to ‘set aside party loyalties and place their constituents at the forefront of their minds’, I wonder if he has ever considered what his former constituents might think about that. 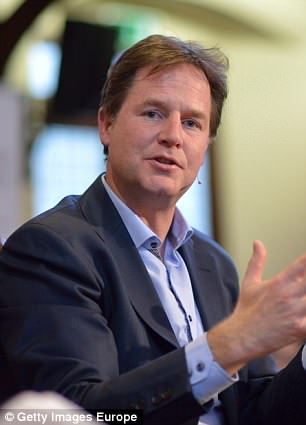 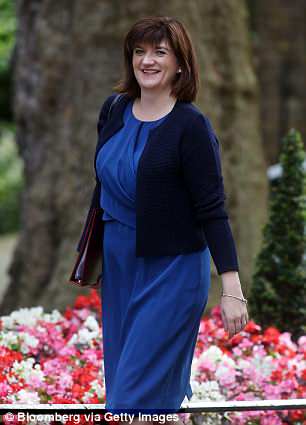 Since Clegg and Morgan also signed their names to this — it’s worth reminding them, too, that, on a constituency basis, twice as many seats voted Leave as did Remain,DOMINIC LAWSON says

In fact — since Clegg and Morgan also signed their names to this — it’s worth reminding them, too, that, on a constituency basis, twice as many seats voted Leave as did Remain. What these three think — but try not to say too tactlessly — is that their Leave-voting constituents didn’t know what they were doing.

This is why Miliband, Clegg and Morgan go on about what they always call ‘hard Brexit’; as if this is not the same as the Brexit for which the people voted.

In fact the word ‘hard’ is just being used as a synonym for ‘bad’: and ‘bad’ — as linguistic philosophers have long pointed out — is the word we use to mean something we don’t like. And these three sure don’t like Brexit.

They say that they will urge MPs ‘to reject completely the siren calls to sever the UK’s deep economic ties with the EU’. What on earth are they talking about? Theresa May has called for a ‘deep and special partnership with the EU’ and it is almost certain that we will end up in a comprehensive free trade deal with not a single tariff between us and them.

Judging by the previews, the Miliband/Clegg/Morgan manifesto in no way makes clear what they actually want (as an alternative to so-called ‘hard Brexit’). Remain in a customs union with the EU? Or still members of the Single Market? Or both? We are not given a clue.

Still, the official opposition is scarcely less confused or confusing. Last week, Jeremy Corbyn rejected the idea of remaining in the European Economic Area (which is what Miliband/Clegg/Morgan want but don’t say) on the grounds that to remain in the Single Market while not an EU member means the UK would be left as ‘rule-takers not rule-makers’.

Yet Corbyn’s position is that the UK should remain part of a customs union with the EU. That means we would be obliged to mimic all the EU’s tariff arrangements with the wider world, but with zero say in them and no ability to negotiate our own trade deals. If that isn’t being left as ‘rule-takers not rule makers’, I don’t know what is.

Corbyn will be deeply irritated by Miliband’s return to these shores, since the former foreign secretary is seen by bereft Blairites as the great hope for a new ‘centre party’, now that Labour is in the grip of the hard Left.

But I am sure he could not be as irritated as voters who have not the slightest desire for the head of International Rescue to save them from Brexit.

One bet the gambling lobby must lose

It is long past time for the Government to have announced the result of its review into the addictive and pernicious high-street electronic roulette known as fixed-odds betting terminals.

The Culture, Media And Sport Secretary Matt Hancock had finally overridden the Treasury’s objections (it had been worried about the loss of tax revenues from a decline in such gambling) and was planning to declare that the maximum stake should be reduced from £100 to £2.

But a last-ditch objection from the Work and Pensions Secretary Esther McVey has intervened, holding things up. It is a mystery why Ms McVey should wish to continue the vast losses endured above all by those on the benefits her department pays out.

She happens to be a close friend of fellow Conservative MP Philip Davies, who was a bookmaker before entering parliament, and who still has cosy links with the gaming industry: such a connection ought to alarm rather than impress the PM, when she finally decides this matter. 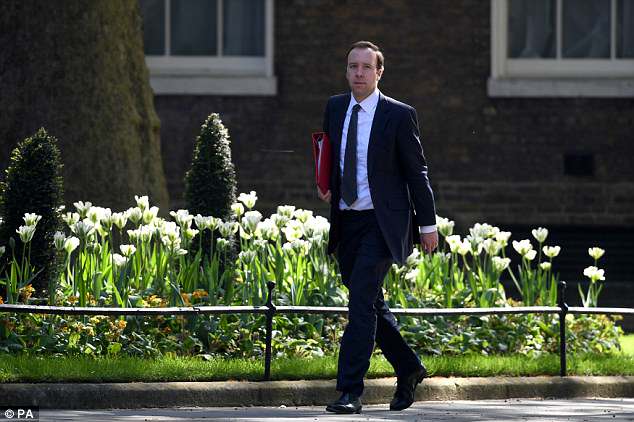 Doubtless McVey has continued to advance the claim of the High Street bookmakers — whose lobbying influence was described to me as ‘fearsome’ by a Conservative MP battling them at Cabinet level — that such a reduction would ‘automatically put 40,000 jobs and 8,000 shops at risk’.

Yes, it would almost certainly reduce jobs in that industry — and (which is the reason for the lobbying) would definitely reduce the profitability of firms such as William Hill and Ladbrokes Coral.

But if less money were spent on their immiserating machines of impoverishment, it would not just disappear into the ether: it would be spent on other goods and services. Perhaps — who knows? — even on food and clothing for the children whose lives have been blighted by their parents’ gambling habits.

And that’s the cost which the Treasury has perhaps factored into its calculations: it may lose immediate tax revenues if the gambling industry is hit, but this form of addiction is increasingly the cause of health problems and family break-up — both of which add considerably to the Exchequer’s burden.

If the vicar’s daughter, Theresa May, doesn’t appreciate this, she is not the woman her admirers portray.