Donald Trump has donned a face mask to visit recuperating military personnel at the Walter Reed military hospital, in a rare nod to the coronavirus pandemic.

Health experts agree that face masks are useful at stopping the spread of COVID-19.

The president has repeatedly shrugged off suggestions of wearing a mask, saying that it causes people to touch their face too much and so is not helpful.

Trump told Fox News on Thursday that he would wear a face mask during the trip. 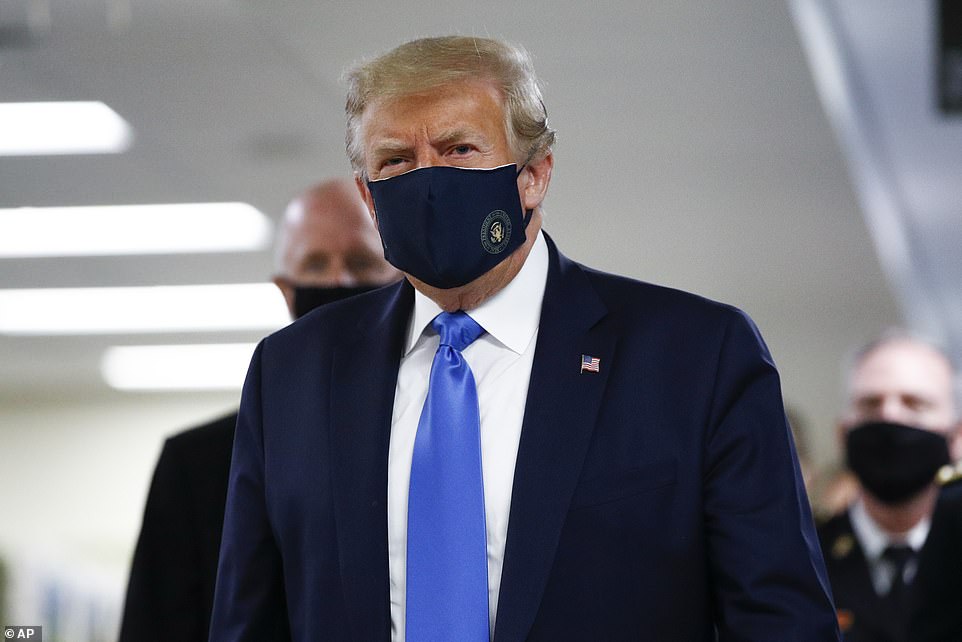 ‘I’m going to Walter Reed to see some of our great soldiers who have been injured,’ he told Sean Hannity.

‘Badly injured. And also see some of our Covid workers, people who have such a great job.

‘And I expect to be wearing a mask when I go into Walter Reed. You’re in a hospital so I think it’s a very appropriate thing.’

Trump’s decision to model a mask in public view and tout it during a Fox News interview Thursday night came after a quiet lobbying campaign by some White House aides and political advisers, aides familiar with the discussions told CNN.

Some of his aides were reportedly concerned by the sight of so many maskless Trump supporters at a rally in Tulsa, Oklahoma, last month and worried by the surge of coronavirus cases in the South.

One presidential adviser described the effort as more than a week of ‘lots of negotiation’ and repeated ‘pleading’ by aides who urged the president to set an example for his supporters by wearing a mask on the visit.

Until this week, Trump had resisted that coaxing, in part because he is tested daily and views it as an unnecessary step and also because he has not wanted to give into media criticism and pressure.

‘I didn’t want to give the press the pleasure of seeing it,’ Trump said during a May visit to a Ford plant in Michigan, where he refused to wear a mask in view of the press in defiance of Ford rules.

He did don the mask when he thought people were not looking. 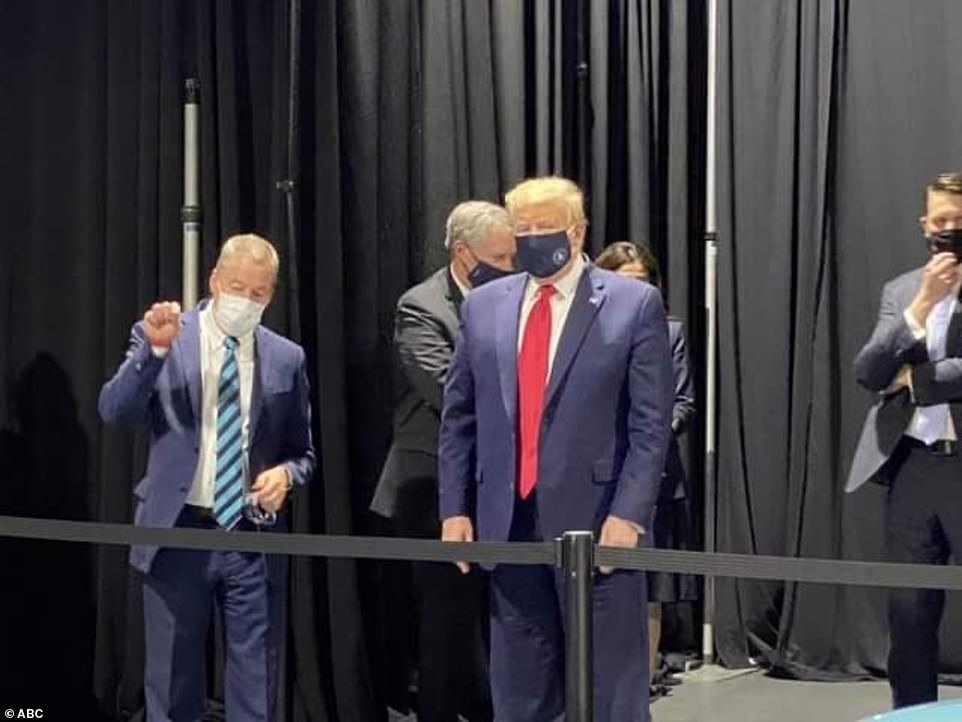 Trump was caught on camera, away from the press, wearing a mask on May 21 in Michigan 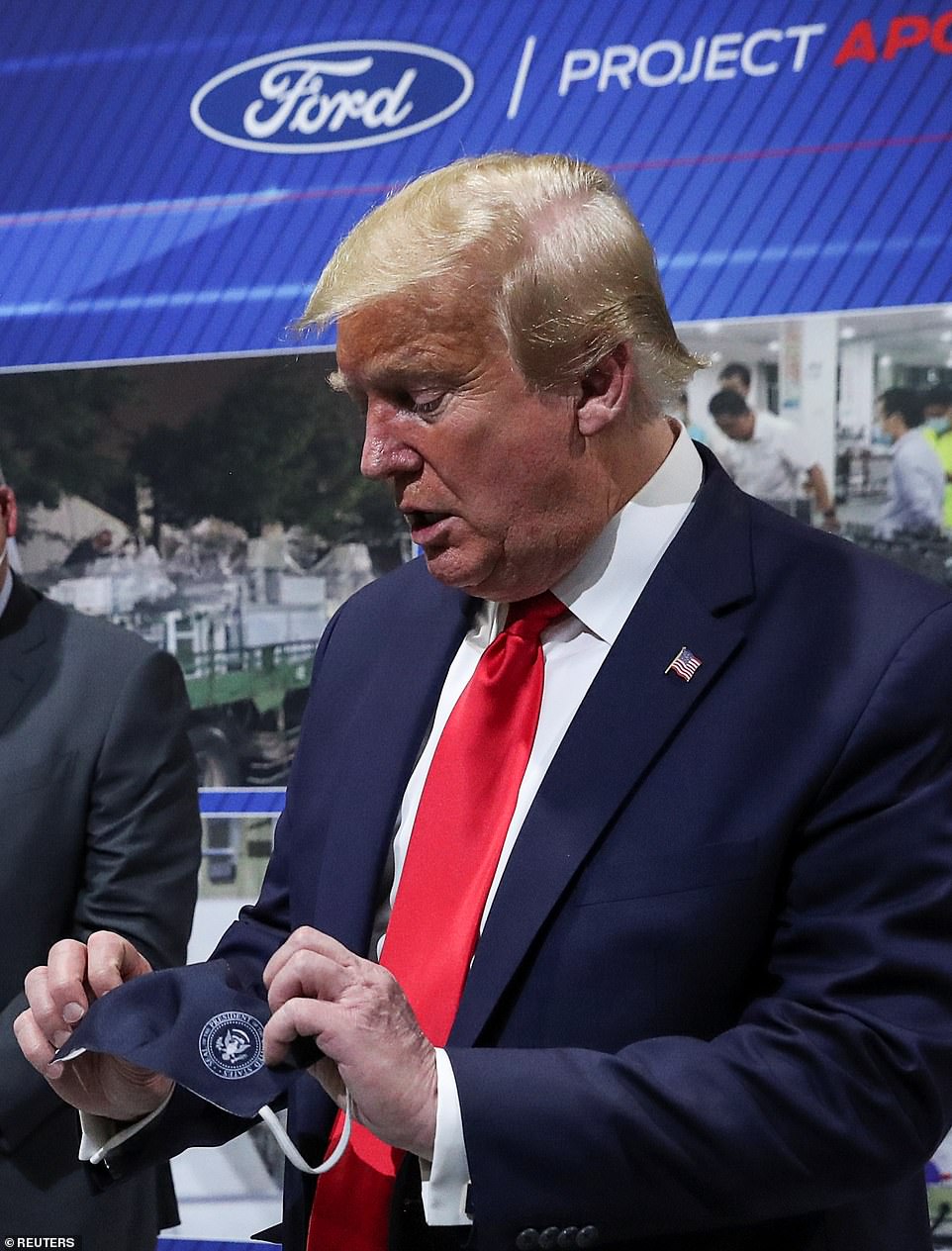 He showed off the mask to press during the Michigan trip, but did not want photos wearing it

Trump’s visit to Walter Reed Saturday will come just hours before he rallies his supporters in New Hampshire – a rally scheduled for Friday evening, but postponed due to poor weather.

Advisers hope his decision to wear a mask will encourage rally attendees to do the same.

The Trump campaign is now ‘strongly encouraging’ attendees to wear masks – a notable difference from Trump’s political events over the past several weeks, where mask-wearing was scarce and few steps were taken to encourage it.

He has refused requests to make masks mandatory at his events.

‘It’s fine to wear a mask if it makes you feel comfortable,’ he said.

A Trump political adviser told CNN the president is not in favor of forcing people to wear them.

‘That is the president. He does not want to say it,’ the adviser said.