Donkey with deformed leg gets prosthetic just in time for Christmas

Not such a wonky donkey! Animal that faced being put down due to deformed leg gets specially-made prosthetic just in time for Christmas

A ‘wonky’ donkey which struggled to walk and faced being put down due to a deformed leg has been gifted a specially-made prosthetic just in time for Christmas.

Tommy was born with a deformed front right leg which was far weaker than his others – causing him to spread his weight unevenly and ‘hobble about’.

The state of his leg slowly deteriorated over the years, causing the poor nine-year-old donkey to suffer damage to his back and shoulder.

But now he has been given an artificial leg which helps him spread his weight and stabilise himself. 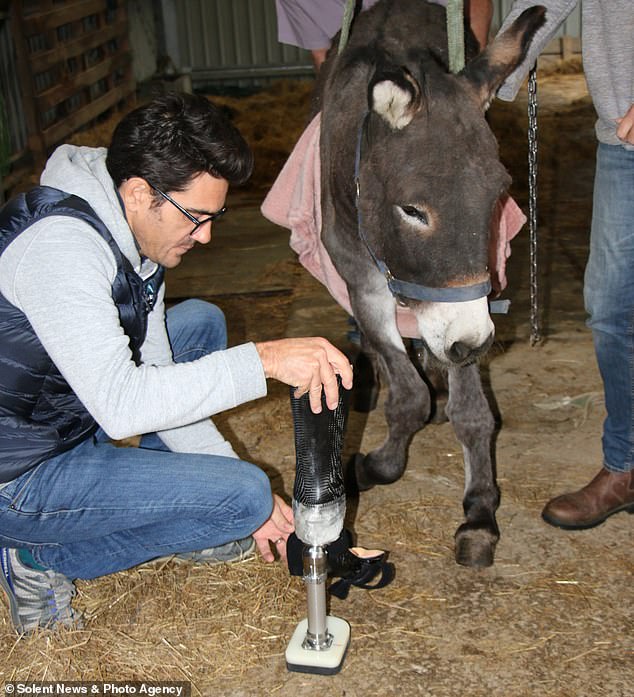 Tommy has now returned home to be with best friend and stable-mate Bobby – who has been with him all his life – on his owner’s estate in Worcestershire.

The artificial leg, made for Tommy by company Dorset Orthopaedic, is fitted to his weaker leg each morning after breakfast.

Matt Hughes, managing director of the Ringwood-based company near the New Forest, Hants, said he made the leg free of charge after he was touched by Tommy’s tale.

The 43-year-old, said: ‘After seeing Tommy initially it took a couple of months to build and fit the prosthetic.

‘Tommy was born with a deformed leg and his deformity had increased over the years so much that his owners were left with the decision of trying to do something about it or potentially having him put down.

‘His owner rang us and asked if we had made anything for donkeys or horses before.

Matt Hughes, managing director of Dorset Orthopaedic, said he made the leg free of charge after he was touched by Tommy’s tale

‘Usually we make prosthetics for humans, but about 15 years ago we made a leg for a horse and my old boss also made a silicone claw for a falcon once.

‘Then I went and met Tommy… He’s such a cute little thing a you just can’t think about doing anything other than helping an animal like that.

‘I said, ‘Let’s give it a go’. We didn’t charge for it… I just wanted to do something decent for an animal.

‘And with donkeys being associated with Christmas, it suited quite nicely to do it now.’

Matt and his team measured Tommy’s leg and constructed a carbon fibre cast to support the deformed leg to take his 150kg body.

‘If the leg was straight it would be the same length as the others,’ Matt explained, ‘but it’s so bent he just wasn’t very mobile and was potentially in a lot of pain.

‘I would call the prosthetic an extension; it supports what is there and realigning it so he’s more stable.

‘He’s now leaving it on for most of the day, and the last time I saw him he was plodding around his field with his mate Bobby, who he likes to knock around with. 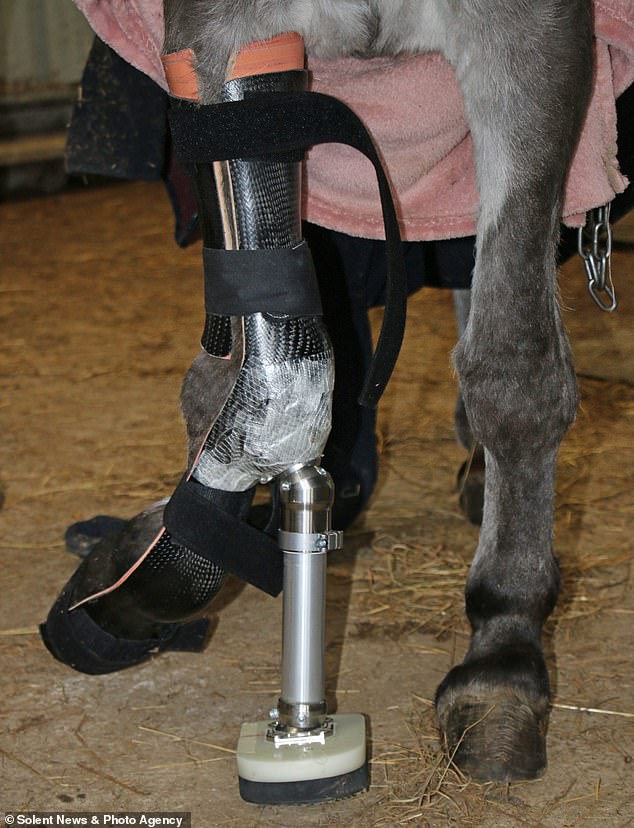 ‘Tommy also has quite a penchant for a ginger nut biscuit, so he’s always easy to bribe.’

Tommy has also been assisted by a farrier, who cares for his hooves, to make him as balanced and level as possible.

His owner, Gary, who has asked for his surname not to be disclosed, who owns ten donkeys as well as ponies and other mules, said it would have been ‘heartbreaking’ for his partner-in-crime Bobby if Tommy had been put down.

He said: ‘His leg was getting worse and we couldn’t do anything else… we spoke to a surgeon who said they could maybe do something, but they didn’t want to operate.

‘We brought him home and were going to have to have him put down. 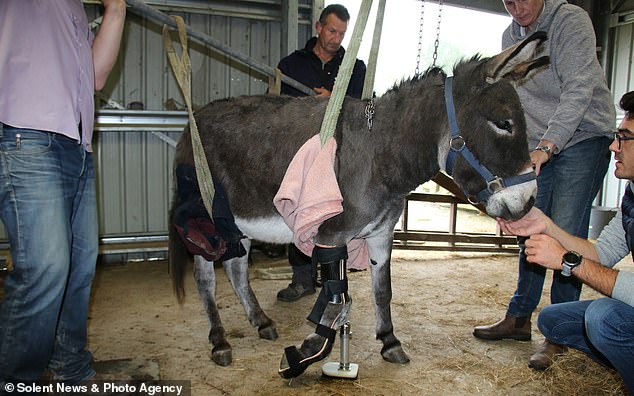 His owner, Gary, said it would have been ‘heartbreaking’ if Tommy had been put down

‘He couldn’t have survived on three legs… 60 per cent of their weight goes onto their front legs.

‘But I saw Matt’s company on a documentary and rang them up, and they came up to see Tommy ten days later.

‘We were getting ready for his companion, Bobby, to be heartbroken. It was affecting him already and he was going to lose his partner.

‘Bobby and Tommy have been together for all of their nine years – and they can live up to 40.

‘Now, with his new leg, he seems much happier. He even has a physio, and he’s adapted to the new leg so well it’s unbelievable.

‘He’s a cheeky donkey who loves his ginger nuts, just like all of them.’