Don’t be fooled by the outlaw gear. Being a bikie is big business

There is an upside and a downside to being bald as a badger.

The downside is from the age of 30 you are asked for a senior’s card, women at nightclubs stand up, not to dance but to offer you a comfortable seat before you break a hip, and a stroll in the Botanic Gardens can result in third-degree cranial sunburn.

The upside is a large shiny dome, rather than piercing blue eyes and a sardonic grin, become your trademark. Don a cap and you are in stealth mode – invisible to passersby.

Some years ago, I attended an outlaw bikie funeral, wearing a baseball cap that made me look like a dad waiting for a school pick-up rather than a fearless investigative reporter who should have his own TV show.

(At one point there was serious talk of an animated series called Sly-of-the-Underworld. It was knocked on the head by short-sighted TV executives who thought it might frighten the children.)

The sight of hundreds of bikies in procession was spectacular – the story I filed quite mundane. 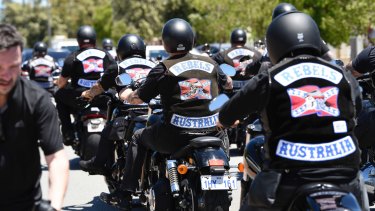 That night the editor rang (no doubt from the Flower Drum) with a dilemma. The photographer at the funeral was ambushed by bikies who grabbed his wallet and took details from his licence.

It was followed by a threat – if Silvester writes anything we don’t like, we will come for you. We (me eating fish fingers on a TV tray and the editor scallops in XO sauce) agreed the story shouldn’t run (it wasn’t that good to be honest). This meant bikies managed to do what politicians and business tycoons couldn’t. They intimidated one of Australia’s major news groups into silence.

(We ended up doing a story on that particular bikie and he was ultimately jailed. So no scallops for him.)

This is the outlaw bikies’ stock in trade – the threat of violence. Which is why they can stand over legitimate business, threaten witnesses and drive out competing drug syndicates in regional centres.

In 1999 Vicki Jacobs was shot in her bed next to her six-year-old son. Her crime? She testified over a bikie-related double murder involving the father of her child.

She was no longer a threat and had built a new life after telling the truth. The contract killing, ordered in Victoria and carried out by an interstate bikie, was both vindictive and practical. It was a message to anyone on the periphery of the gang – inform and you risk death.

So why join a gang? We all want to belong. Bluebloods eat blue cheese at the Melbourne Club, Scouts learn how to tie knots and poach eggs on a campfire (what’s wrong with avocado on sourdough at a rustic cafe?) and fans wear footy jumpers without ever playing a game for the club.

At the boxing I observed a member of the Hells Angels in full colours. After hearing him talk it was clear he made witches’ hats look like Mensa members, yet he was surrounded by people treating him as a celebrity.

That is the unwritten contract. Join the bikies and you gain notoriety but in return you must be a no- questions-asked soldier. Machismo becomes more important than morality.

The first international group established here was the Hells Angels in August 1975, with Melbourne and Sydney chapters totalling 24 members – 11 in Melbourne and 13 in Sydney.

According to one of the original police investigators, Steele Watermain, they were hardly organised crime. “They were just a bunch of baggy-arsed kids hanging out in front of a hamburger shop,” he said, selling dope and carrying out low-level burglaries.

All clubs have their rules. The Melbourne Club says no business chat because it is rude, bikies say no business chat in the clubhouse because it could be bugged. The Angels’ original charter included “Brothers must not fight each other with weapons ($300 fine)” and “Members must also ensure that their old ladies and girlfriends conduct themselves in a manner fitting their position”.

One early member, Peter John Hill, flew to the US to meet gang bosses, returning with an amphetamines recipe that vaulted them from a small bikie gang to major players in the drug trade. 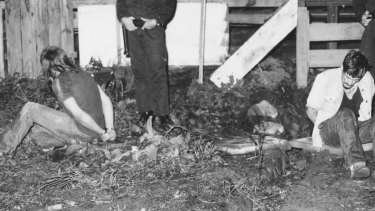 The gotcha moment: Hells Angels arrested at their drug lab in Greenslopes. It was only the start of the battle.

Then inexplicably police lost interest, pretending bikies were no longer a problem. Ten years ago, they had to admit they were horribly wrong and established the Echo Taskforce.

The head of Echo, Detective Inspector Graham Banks, isn’t one to downplay the influence of outlaw bikies: “They are our number one organised crime threat.”

He lists their main activities as standover, extortion, assaults, contract and feud-based murders and drug trafficking. They have also been involved in illicit tobacco and firearms trafficking.

Echo is made up of investigative teams, each responsible for a major gang and several smaller independent and feeder gangs. Banks declares the big five are the Rebels, Bandidos, Hells Angels, Mongols and Comancheros.

In Victoria there are 27 gangs with about 2000 members and associates. The smaller gangs become recruiting grounds for the main gangs, although associates can be drafted if they have a needed skill.

“They will pay significant sums for completing tasks such as a shooting or a serious assault,” says Banks. “Each gang has a ‘sergeant-at-arms’ to move the chess pieces. Violence is a rite of passage to being a patched member.”

He says each of the major gangs have organised murders. The trouble is some of these hit teams are led by violent knuckleheads who don’t do their homework, meaning they regularly kill the wrong person.

Take the 2018 Comanchero-ordered hit in Keysborough. The target was a gangster who lived up the road. The victim was Muhammed Yucel, shot dead as he left a house in the same street.

In 40 years, the gangs have come a long way from cooking speed in a farmhouse using Hill’s US formula. They now have a refined commercial model that would receive a High Distinction at the Harvard School of Business. 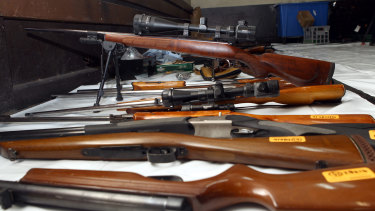 Firearms seized from bikies in Victoria.

Long gone are the days of planning crimes over beers at a campfire. Banks says they use high-tech encrypted messages to plan on an international scale.

The Big Five have strong bases in capital cities and regional centres. They have also established chapters in South-east Asia, Europe and the Americas to source drugs to be imported. An Australian gang tried to buy an Indian pharmaceutical company to provide pseudoephedrine for illicit drug production.

These overseas affiliates provide perfect locations for senior Australian bikies to live if they feel they may be arrested by police or killed by rivals.

Gyms and tattoo parlours are used to launder money and groom police and government officials as secret agents.

One squad detective, an amateur bodybuilder, leaked information to bikies for illegal muscle- building drugs. Another who wanted to join Echo resigned when it was discovered he travelled overseas with a bikie leader.

The bikie model is to have bosses run the show, committed workers follow the rules and a flow of eager apprentices. If General Motors was as efficient, we’d still be buying Commodores.

As a result, Echo has expanded its brief, because bikies don’t exist in a bubble. The original US gangs were white, redneck racists. The Australian gangs are multicultural, using Pacific Island members as heavies and recruiting gang leaders as street sellers.

Earlier this month Echo held a crime summit involving Corrections Victoria, Australian Federal Police and regional detectives. The aim is to develop a coordinated approach where bikies are monitored in prison, regionally, internationally and in capital cities. The gangs are seen as a major part of a greater, interconnected organised crime structure.

One weapon increasingly being used is Firearms Prohibition Orders, because not only the bikies but associates who use safehouses to hide firearms can be targeted.

The “outlaw” in outlaw bikies is a nonsense. They live by rules so strict they make Stalin’s Russia look like Woodstock.

Banks says the gangs’ carefully crafted image as a renegade band of brothers who live by their own code is a myth.

“They never pick a fight they think they can’t win, and it is all about the money.”