Doubts over Number 10’s £100billion ‘Operation Moonshot’ plan as mass-testing scheme of all 250,000 people in Salford is scaled back just to at-risk residents

Doubts have been raised once again over the Government’s £100billion ‘Operation Moonshot’ testing plan after one mass-screening programme was paused and then scaled back.

Ministers had aimed to provide regular testing to all 254,000 residents in Salford, Greater Manchester, to allow them to lead ‘normal’ lives again without the need for social distancing.

They were to be offered rapid saliva tests that give results in 20 to 90 minutes, with the hope of finding an effective way of achieving the goal of carrying out 10million tests a day by the end of the year.

But six weeks after its launch the trial has been scaled back to those who are most at-risk and living in ‘some areas’ of ‘high-density housing’.

The U-turn comes amid concern over the accuracy of the no-swab Optigene LAMP tests used and throws more pressure on ministers to achieve their colossal aim of 10million swabs a day by December.

Its current target is 500,000 swabs a day by the end of October, but industry leaders have already warned they are ‘a few weeks behind’ the deadline due to problems in the supply chain.

Yesterday 219,000 swabs were processed but government data shows at least half of all people taking tests wait at least 48 hours for their results.

The Scientific Advisory Group for Emergencies (SAGE) has warned Test and Trace is having only a ‘marginal’ impact on the spread of the virus, as the system fails to test and trace enough coronavirus-infected patients, and many individuals asked to self-isolate fail to do so. 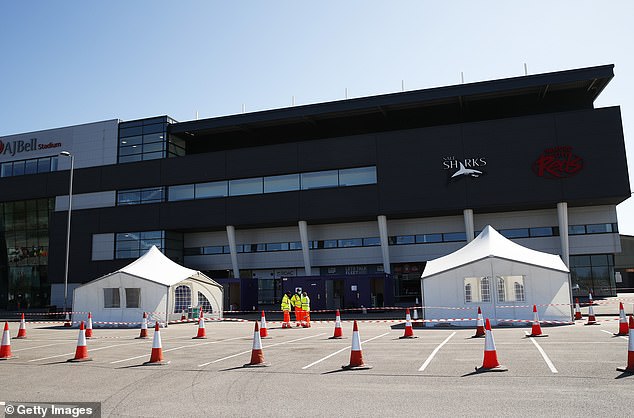 A testing centre at the AJ Bell Stadium in Salford, Greater Manchester, on April 21. The area’s ‘Operation Moonshot’ testing scheme has been scaled back by the Department for Health

Adverts by private clinics and test centres claiming antibody tests could show whether a person is immune to Covid-19 have been banned by the UK’s advertising watchdog.

The adverts by Corona Test Centre and London Vaccination Clinic were ruled misleading by the Advertising Standards Authority (ASA).

Meanwhile, an advert by Solihull Health Check Clinic said their antibody test was ‘100 per cent accurate’ in telling a patient whether they had contracted coronavirus – a claim which was ‘not substantiated by evidence’.

The watchdog fast-tracked the cases as part of its focus on ‘tackling ads that exploit health related anxieties during the pandemic’.

It showed the message: ‘We are on a mission to safely get you back to your friends and back to work’.

A page on its website, as seen in May this year, also included the claim that ‘Antibody testing will tell you if you’ve had the virus and developed an immune response’.

XMedical Ltd removed the ad from Facebook, Instagram and Google, but argued its website was not an ad ‘because it was their home page and their consent page’.

When the £500million arm of ‘Operation Moonshot’ was launched in Greater Manchester, the Department of Health promised 250 tests a day, which would then be ‘scaled to the whole area’.

The government branch said it would lead to Covid-19 transmission chains being ‘broken almost immediately’ by ‘delivering on-the-spot results’.

It was just the first step in enacting the programme and achieving the eventual goal of Operation Moonshot.

But the scheme was struggling to attract even 250 participants in Salford to get it started, reports The Guardian.

Paul Dennett, the mayor of Salford, told the newspaper the council had been asked to pause the programme this week over a lack of clarity on the accuracy of the saliva tests.

‘Today, we’ve received new correspondence from the DHSC, after chasing a written update for several weeks, “un-pausing” the community testing project with an emphasis on more targeted testing towards high-risk individuals and communities – as opposed to whole city “mass” community testing being rolled out after a few initial weeks of concept testing,’ he said.

‘We are reviewing the new correspondence… and will come to a conclusion soon, especially given the urgent need to update our residents in the city.’

A Department for Health spokesman denied the project had been paused and scaled back when contacted by MailOnline.

But announcing the launch of the trial, the body stated: ‘The pilot will begin with a select number of participants and up to 250 tests a day, to be scaled to the whole area.’

A spokesman said the pilot was focusing on testing in ‘high-risk’ environments and groups only, while it will ‘continue’ to offer tests to residents in ‘some areas’ of ‘high-density housing’.

They added: ‘The no-swab Optigene LAMP test used in the Salford pilot is ongoing and has already proven to be effective.’

The no-swabbing method – which relies on two enzymes to convert the virus’ protein strands into DNA – was touted as a ‘game-changer’ for its speed.

But scientists have warned it is less accurate than other methods and only a few dozen samples can be run at a time.

A trial carried out at the Karolinska Institute, Stockholm, found it could detect the virus in nearly 90 per cent of the 248 people assessed.

Lead study author, Vincent Pelechano, told Nature the test could be less accurate for some samples, such as those contaminated with blood.

Salford has a coronavirus infection rate of 301 cases in the last week per 100,000 people, according to the latest data from Public Health England, as its outbreak doubled in week up to October 4. 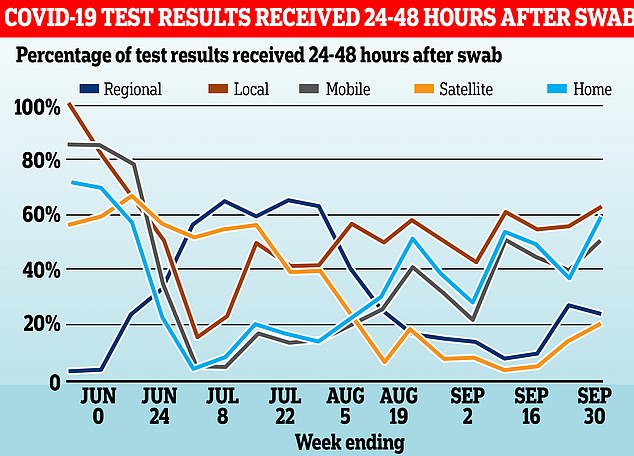 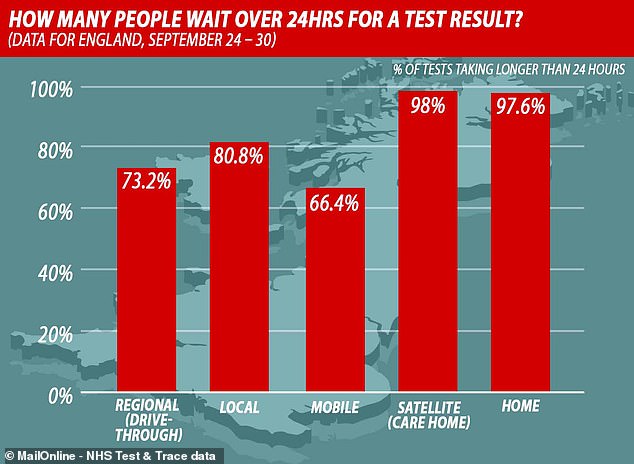 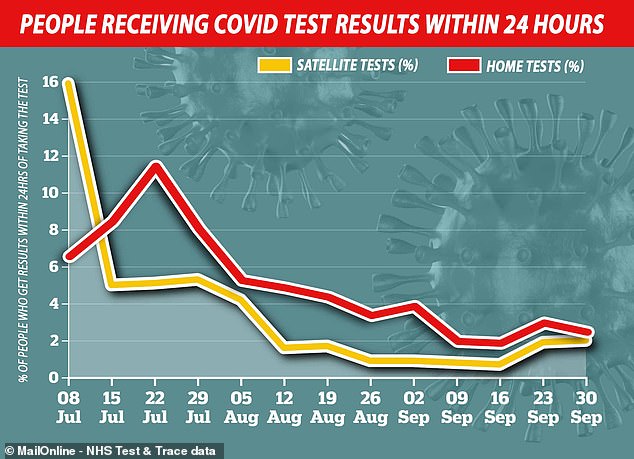 Waiting times for test results done in care homes or through home testing kits sent in the post have got worse and worse since the summer, with now only around two in every 100 people getting their result within 24 hours

Half of people taking coronavirus tests in England have to wait at least 48 hours for their result, despite Boris Johnson’s pledge to turn all swabs around within a day by the start of July.

NHS Test & Trace data shows that in the last week of September more than 750,000 people had to wait more than 24 hours to find out if they had Covid-19. Just 116,026 out of nearly a million tests were turned around within the Government’s target time — the equivalent of 11.9 per cent. Fewer than half of Britons who have had a test hear back within two days.

Getting test results quickly is vital so people can start to self-isolate and warn loved ones they have been close to if their test is positive, or be reassured that they probably don’t have Covid-19 if it is negative.

The Prime Minister had promised to make sure all tests were completed within 24 hours by the end of June, but the system has never hit the target.

Greater Manchester is set to be plunged into tier-three lockdown along with Liverpool, which would see the closure of pubs, gyms, and other leisure centres in a desperate bid to curb the rising tide of infections.

It comes as Britain’s Test and Trace system is overwhelmed by rising cases, with scientists saying the £12billion system is set to ‘further decline’ unless it is vastly expanded to match the surge in cases.

Boris Johnson has promised the scheme will be ‘world-beating’, while experts and politicians alike see it as a major way of reducing the severity of restrictions imposed.

But doubts over system were cast in SAGE documents released hours after Boris announced his traffic light lockdown.

SAGE scientists wrote: ‘The relatively low levels of engagement with the system… coupled with testing delays and likely poor rates of adherence with self-isolation suggests that this system is having a marginal impact on transmission at the moment,’ they wrote.

‘Unless the system grows at the same rate as the epidemic, and support is given to people to enable them to adhere to self-isolation, it is likely that the impact of Test, Trace and Isolate will further decline in the future.’

The criticism, voiced in a summary of a review of measures on September 21, has increased the pressure on Baroness Harding, the Conservative peer in charge of Test and Trace.

Shadow health secretary Jonathan Ashworth said: ‘This is yet further evidence that the Government’s incompetence is hampering our response to a second wave.

‘Sage have essentially confirmed test and trace is not functioning adequately as we have been warning for months.

‘Ministers need to get a grip of testing so we can get control of the virus.’