DRAMATIC pictures capture the moment a fierce mother bear with cubs clinging to her back took on two huge Bengal tigers.

The sloth bear had the scrap of her life after she accidentally disturbed the two mating big cats mid-tryst in Ranthambore National Park, India. 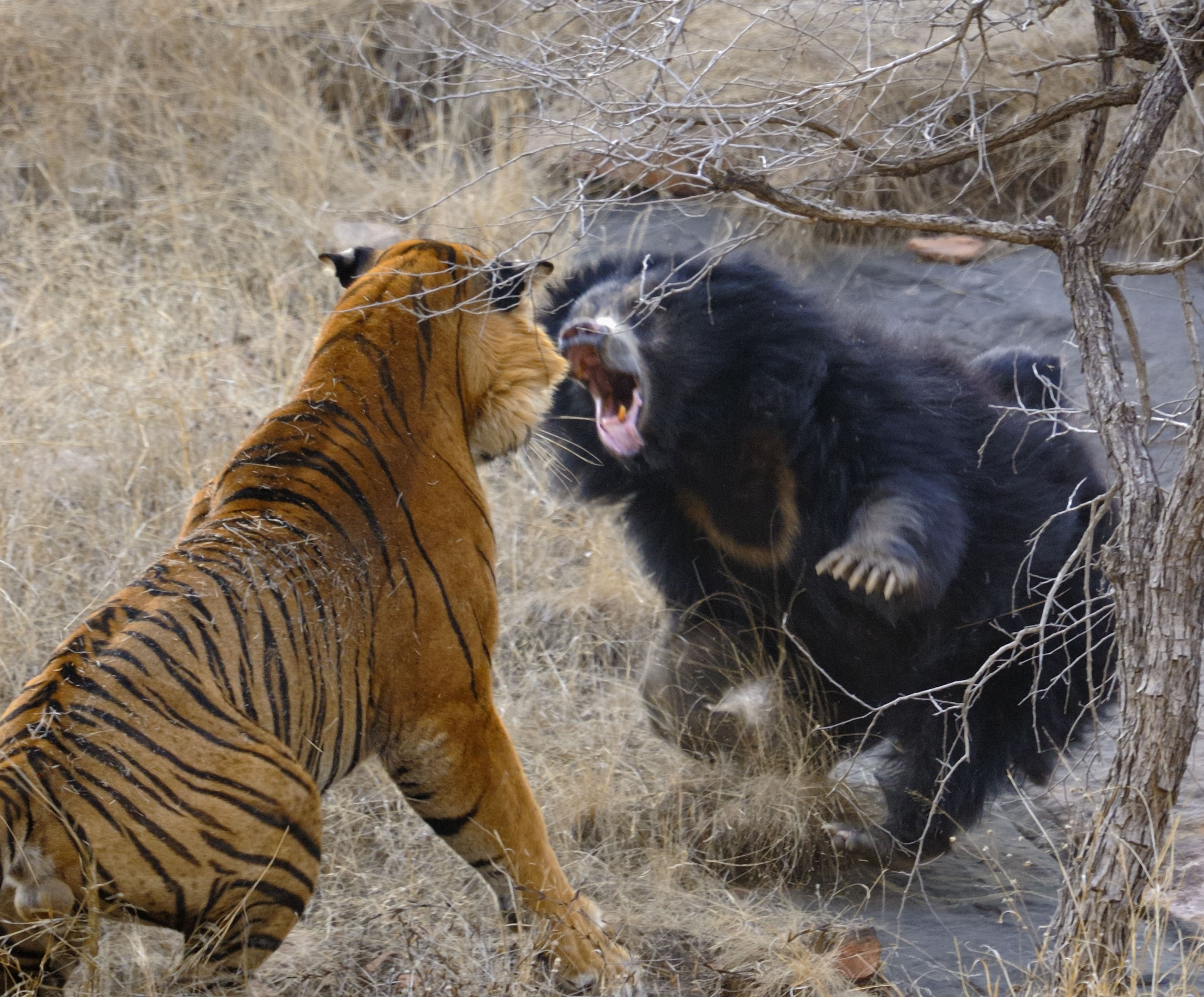 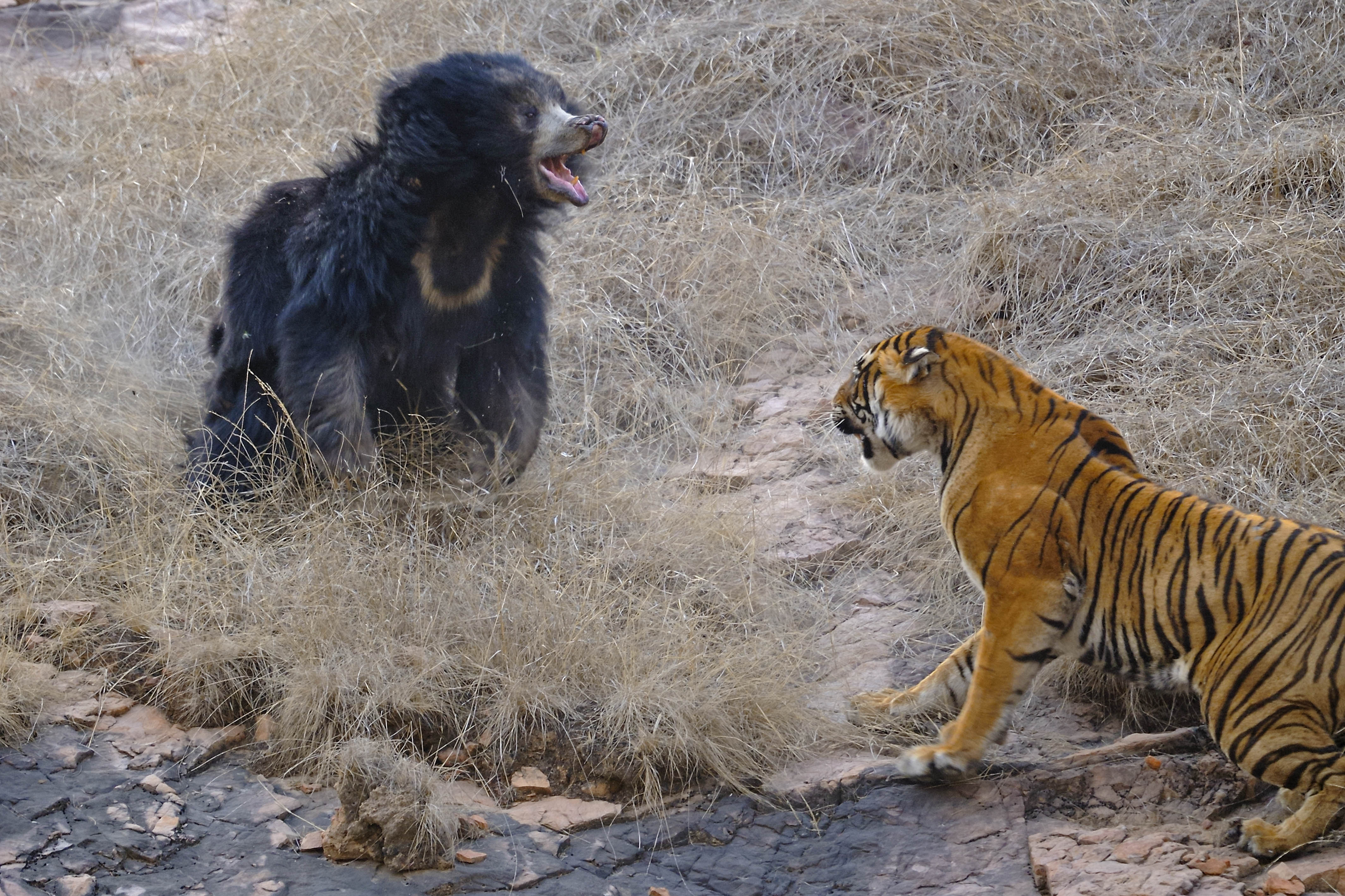 Her two cubs gripped tightly to her fur as she clashed with the tigress and the powerful male one after the other.

The thrilling encounter was captured by wildlife photographer Aditya Dicky Singh, who admitted he feared the smaller bear would be killed.

But he watched in awe as the mother chased off both big cats and kept her cubs safe.

Aditya said: “The bear appeared to be in serious trouble and we expected the bear to bolt away but the bear had other plans.

“The bear cubs flattened themselves on the mother’s back while the mother charged at the approaching tigress.”

He said the young tigress had not expected that the bear would charge at her.

He went on: “The bear started screaming loudly and got increasingly aggressive.

“Soon there was a loud slanging match between the two, which the bear won. The tigress beat a hasty retreat while the bear stood her ground.” 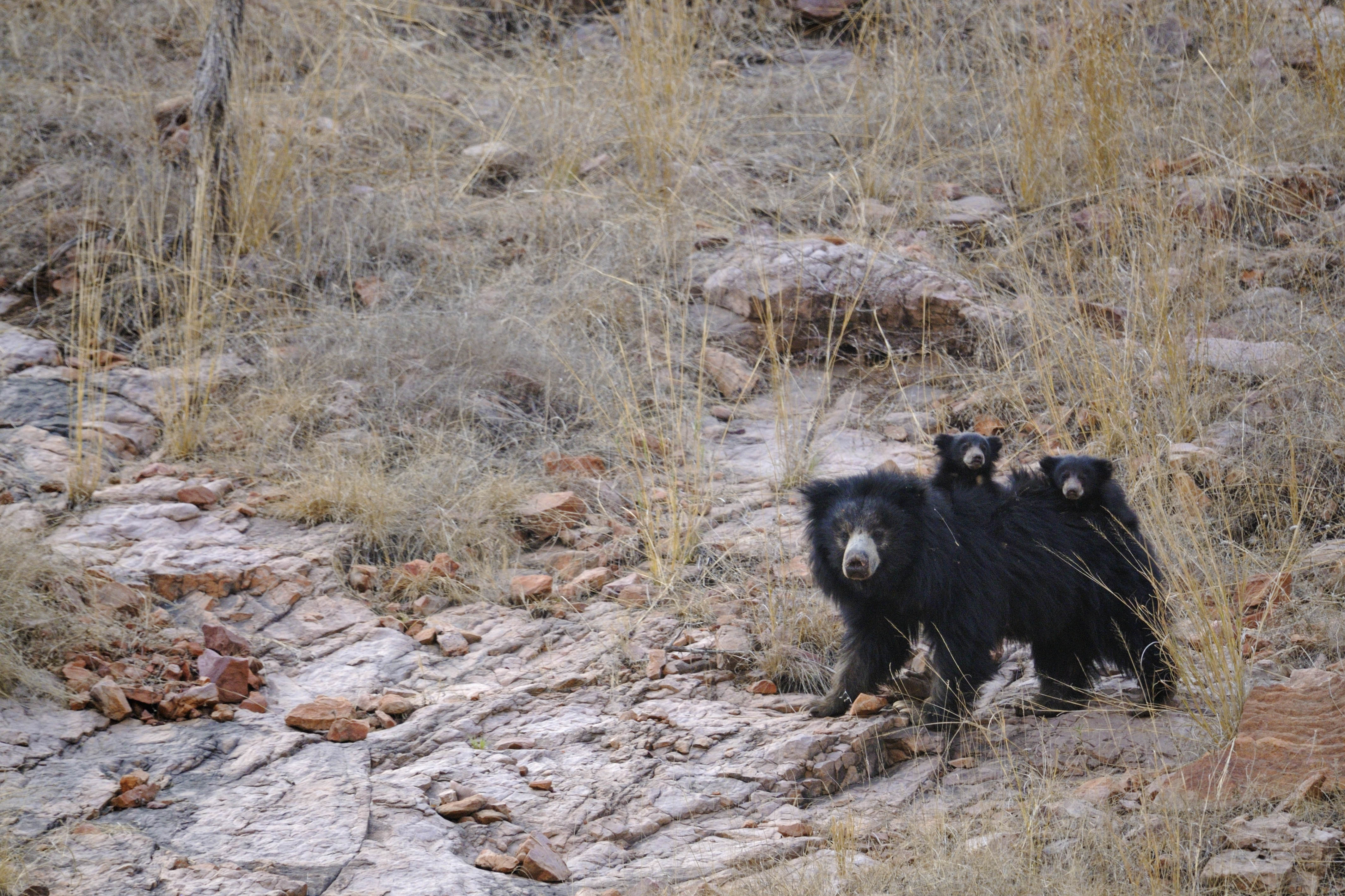 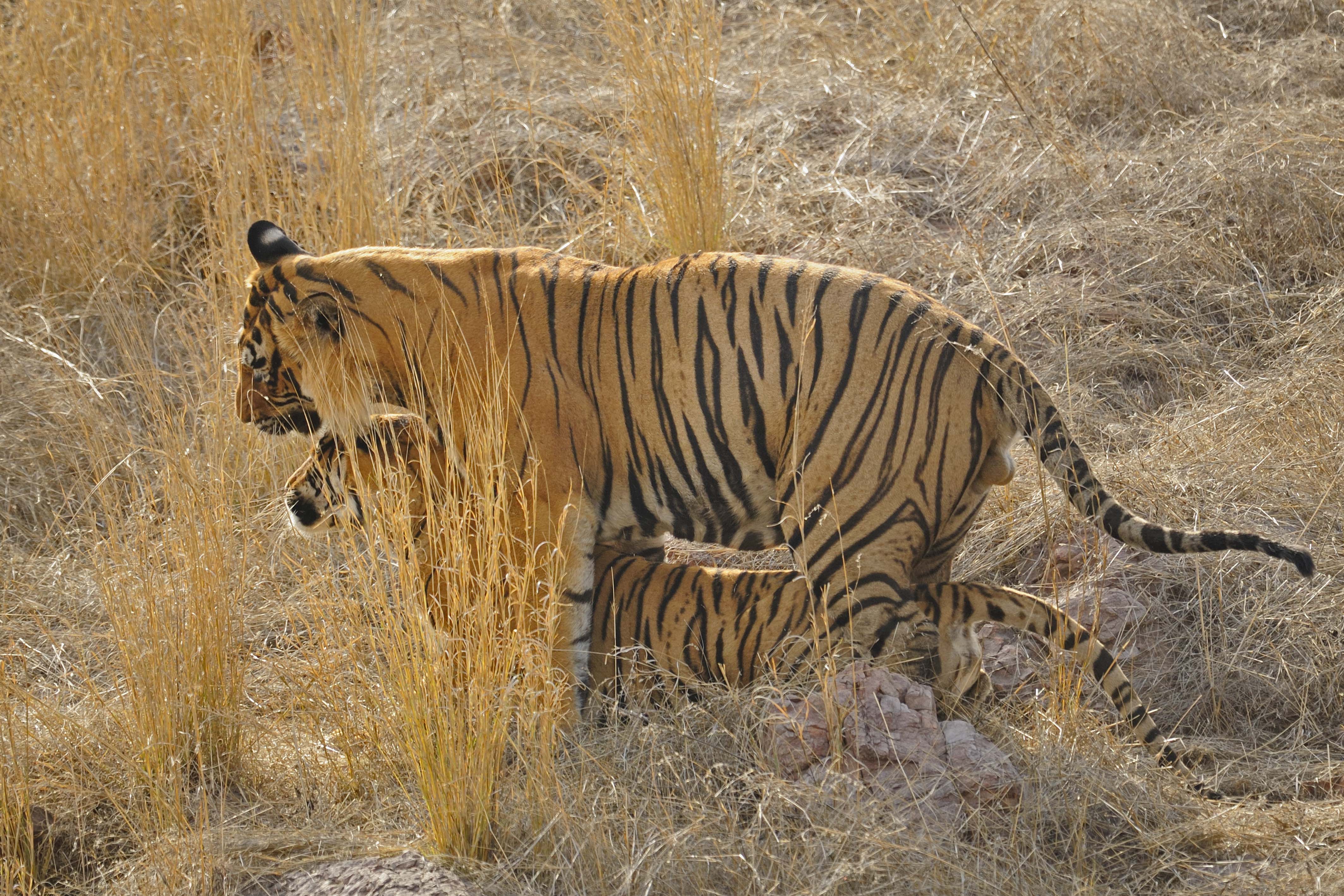 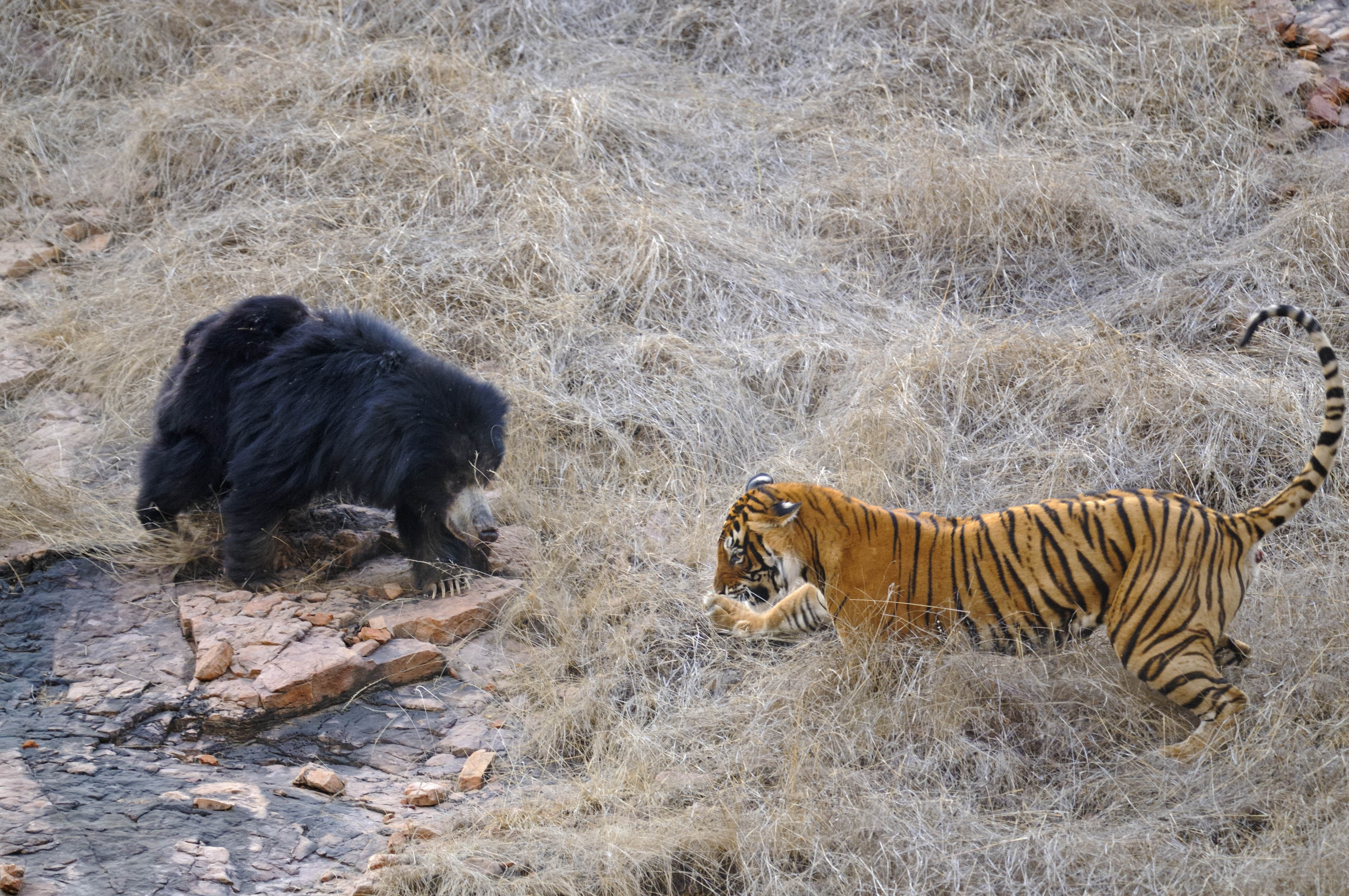 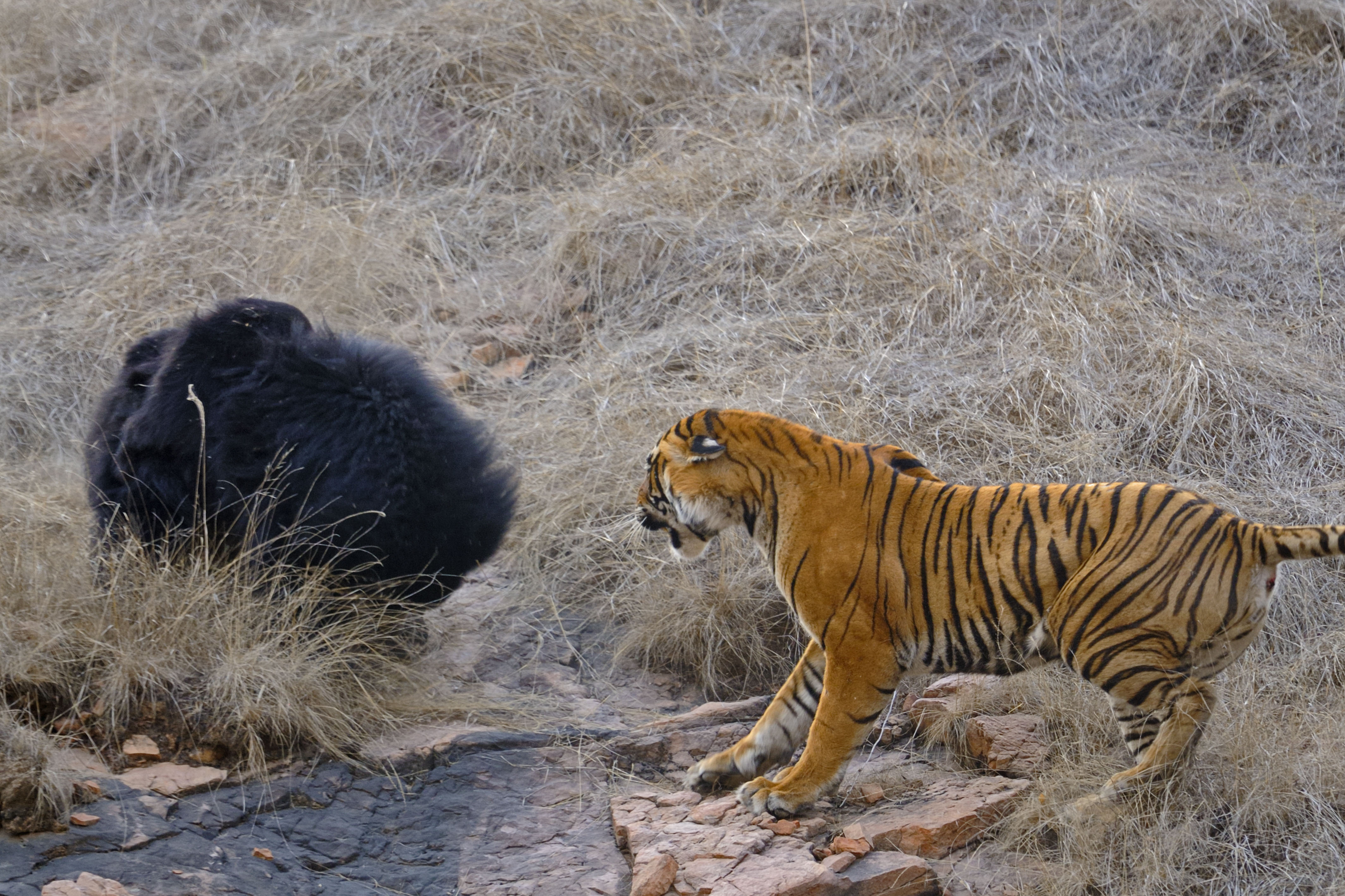 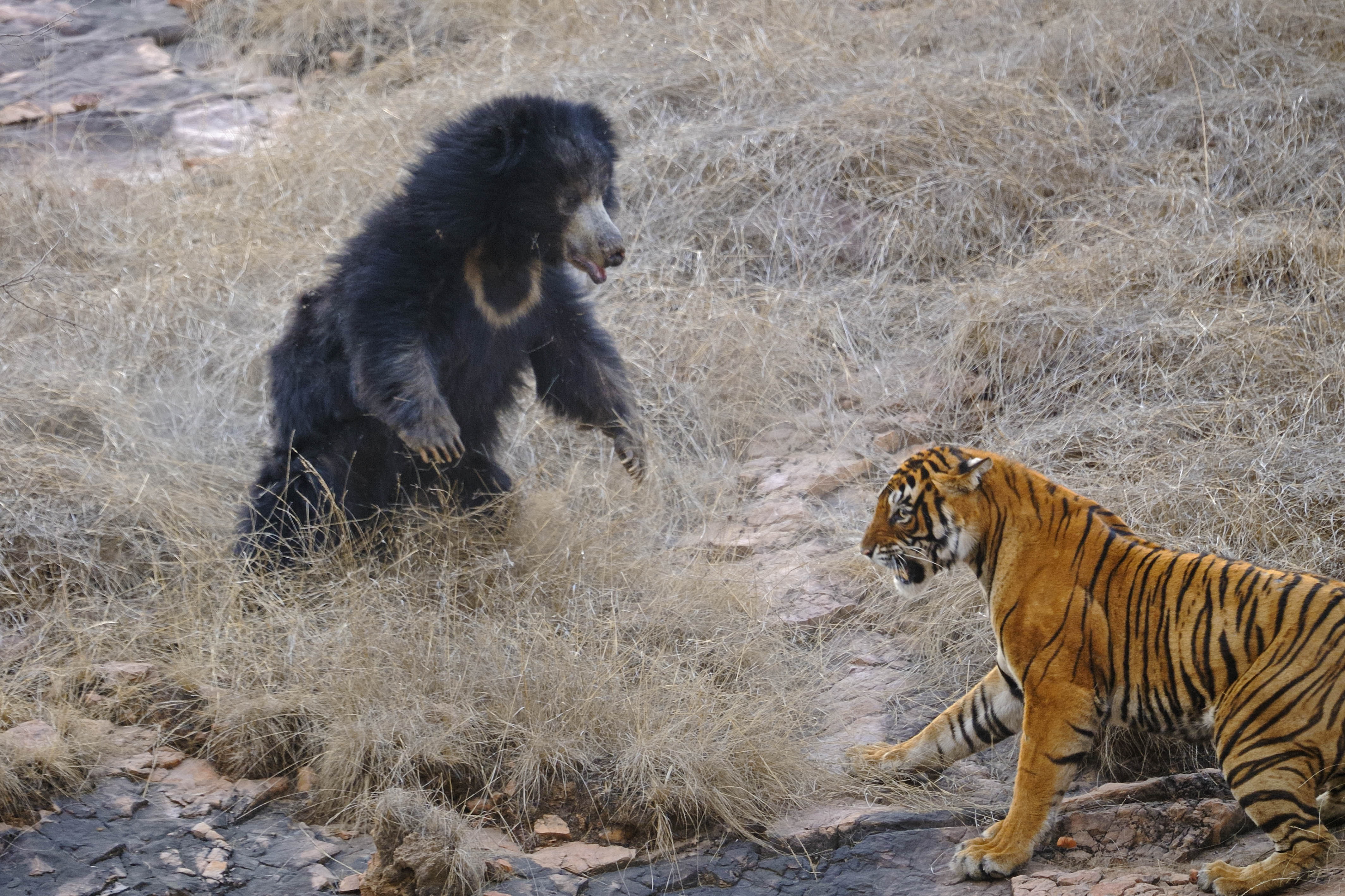 The male tiger, who had observed the drama from a short distance, then joined the battle.

Aditya said: “We were worried for the bear. We had seriously underestimated the power of an angry mother but the young male star of southern Ranthambhore could not even budge the bear.

“These two had another loud slanging match that went in the bear’s favour.

“All this happened in exactly two minutes and ten seconds.

“When the clock started it seemed that the mother bear had got herself into a very dangerous spot.

“In ten seconds she had taken control and two minutes later she had forced two tigers to back off.

“The victor walked off leaving behind two sheepish cats.” 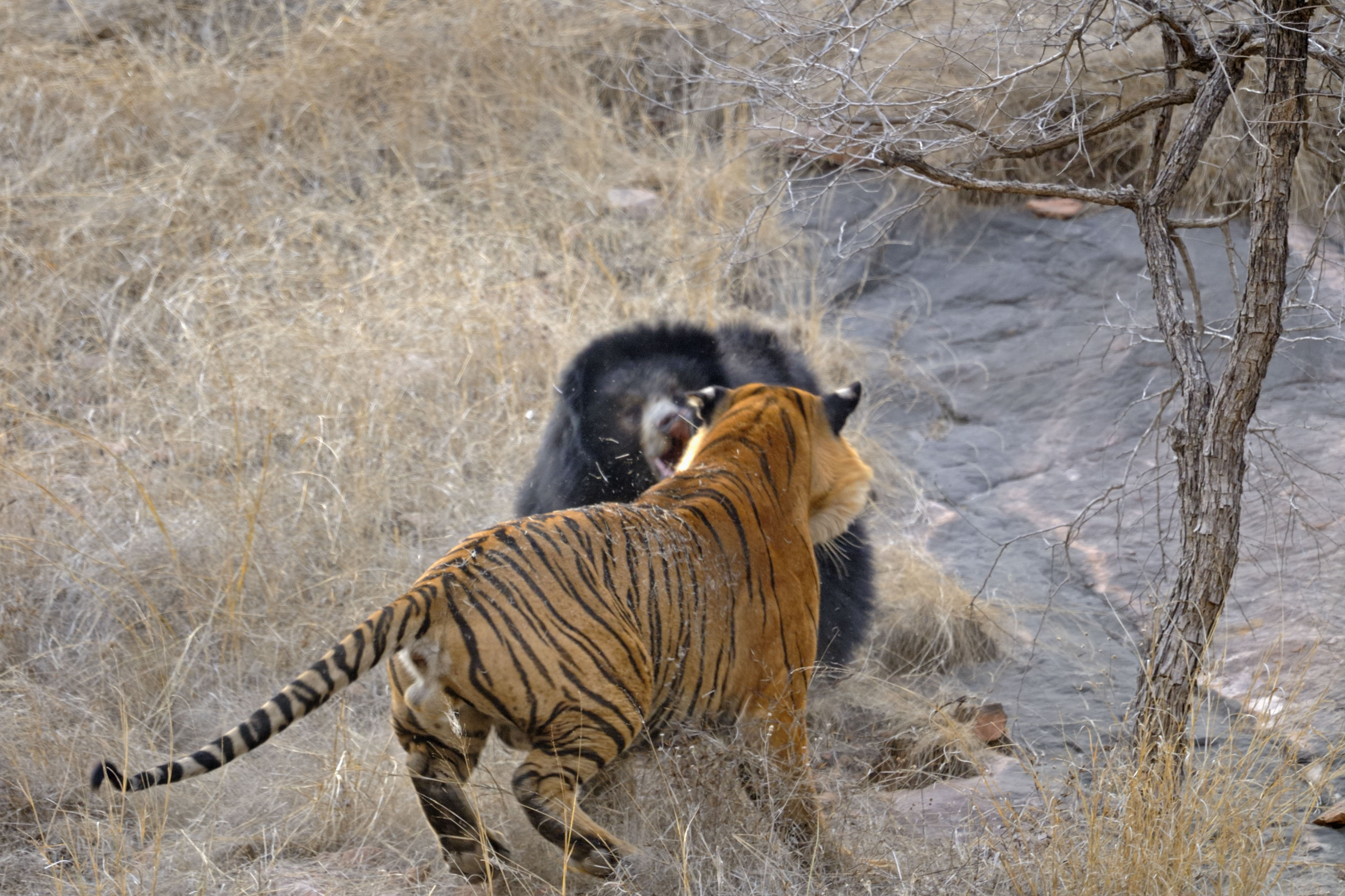 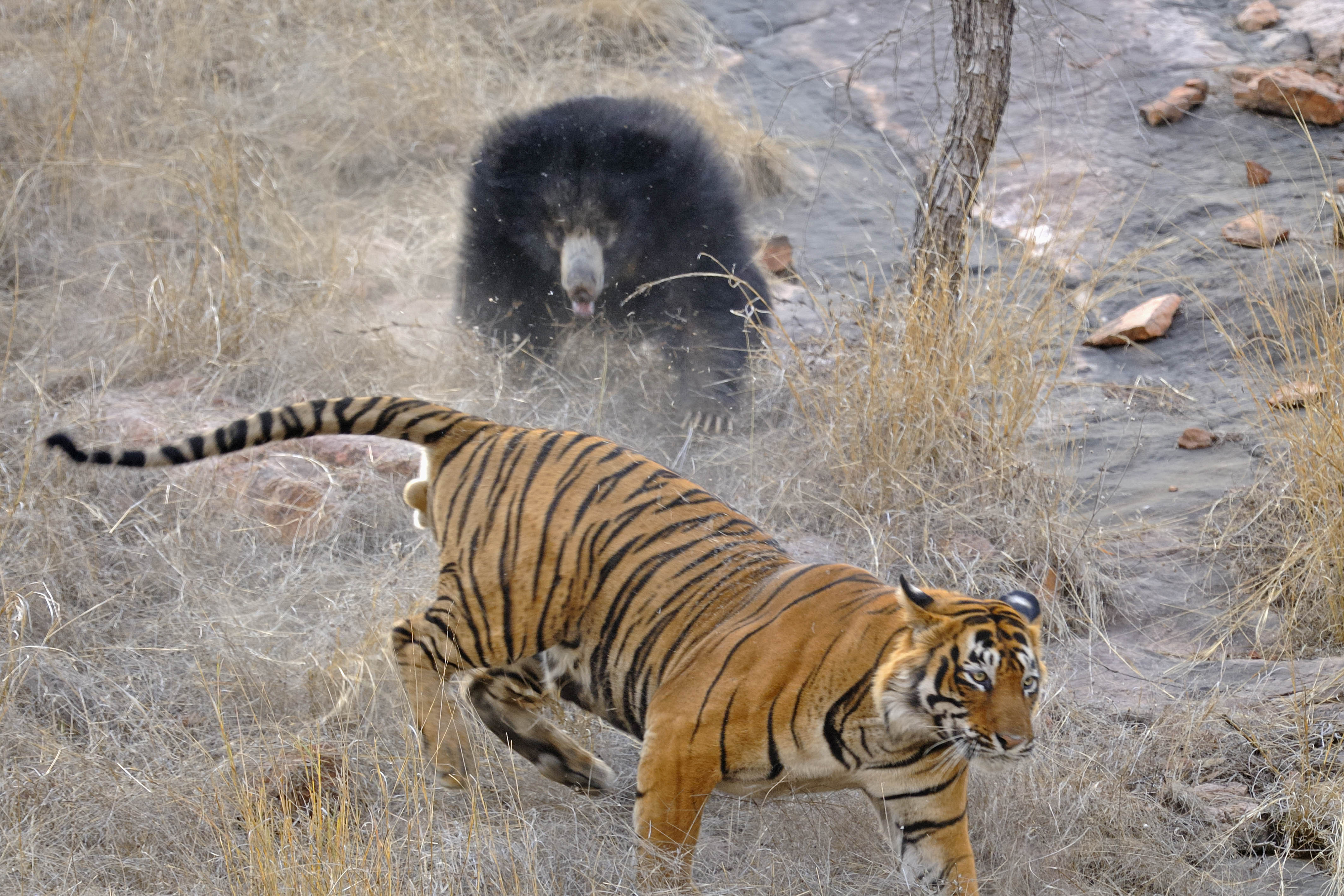 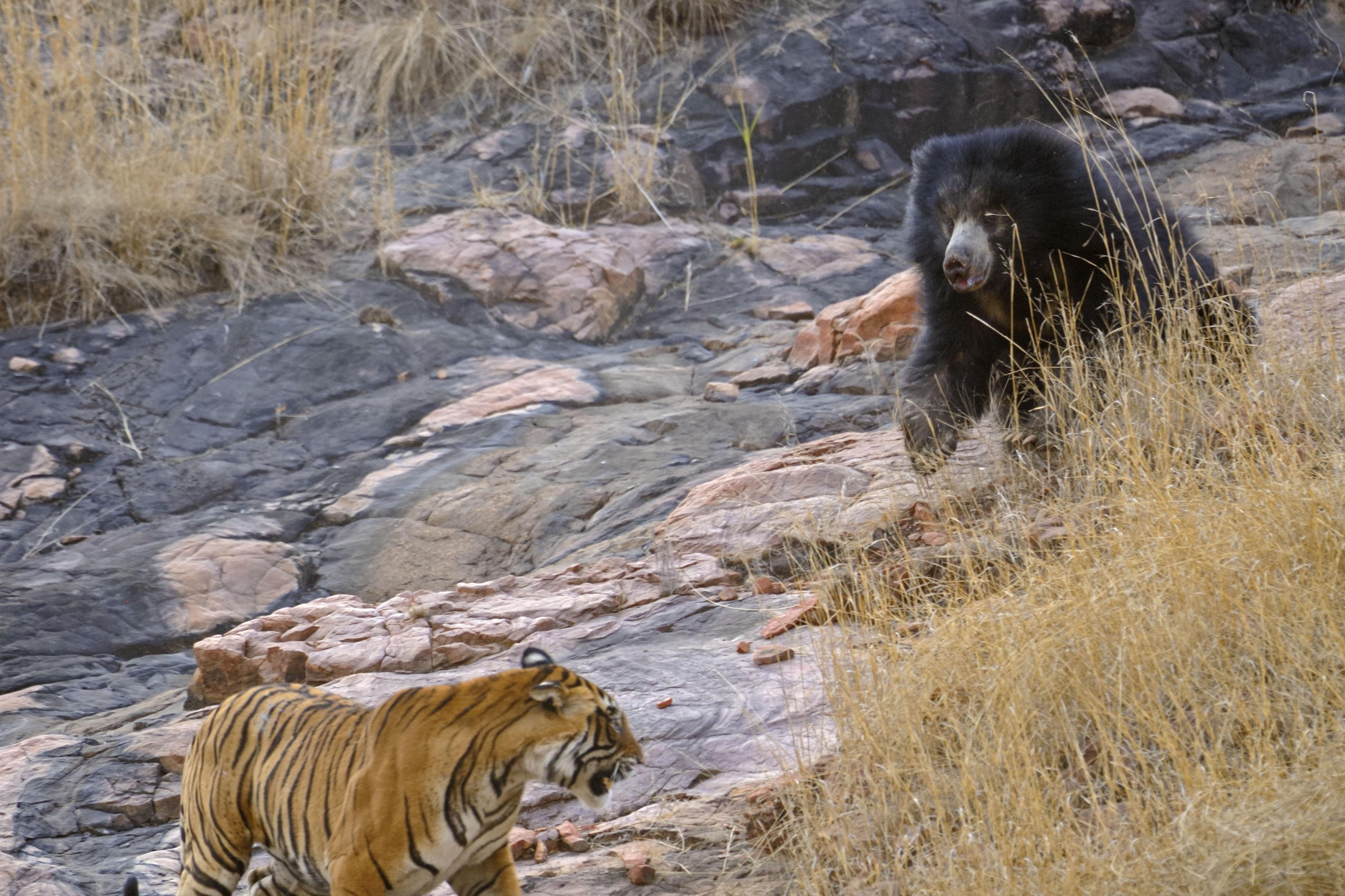 They feed mostly on ants and termites and also like honey.

Baloo in the Jungle Book is thought to be a sloth bear.

Despite their relatively small size, they are the world's deadliest bears to humans, according to National Geographic.

Dozens of people are mauled to death each year in India as villagers encroach on their shrinking habitat.

In November, a tour guide filmed a 30-minute battle between a sloth bear and a Bengal tiger in Todoba Andhari Reserve.

The bear was badly wounded, but managed to fight back and eventually saw the tiger off.

Tour leader Arpit Parekh described it as a "once in a lifetime" moment.