This is the dramatic moment an unlucky kayaker collided with a speeding white water raft and capsized.

The crash was caught on camera and shows the two colliding mid-air sending the kayaker flying and flipping them upside down.

The incident happened on the Upper Gauley River in Summersville, West Virginia on September 12. 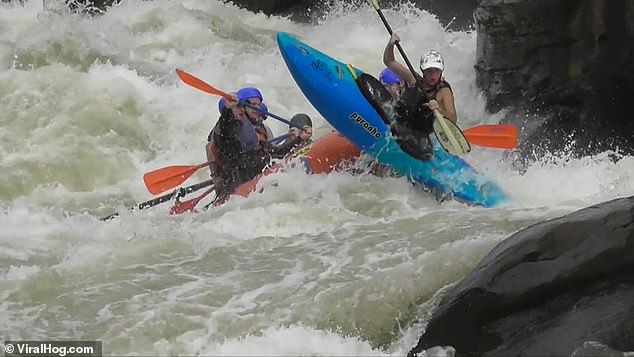 Footage shows the kayaker navigating their way through the choppy Pillow Rock rapid on the Upper Gauley River.

Suddenly a speeding and out-of control white water raft appears behind them.

It is being paddled by a group of six people with another person steering the raft from behind.

The kayaker tries to paddle out of the way – but it is too late. 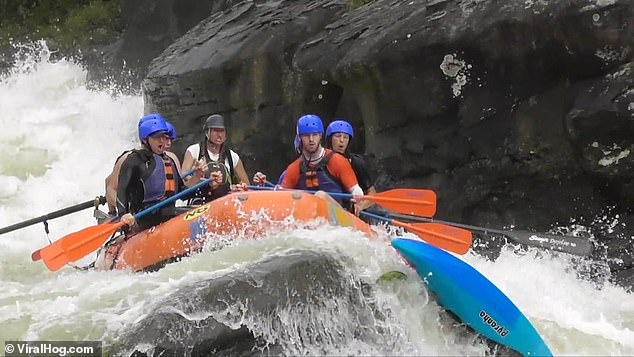 The white water raft ploughs into the kayak that is flipped upside down, dunking the kayaker underwater, as the people on board the raft look on in shock

The raft is moving too fast and it ploughs into kayaker who is flipped upside down and thrown underwater.

The onlooker filming the footage gives a very vocal reaction to the accident unfolding shouting: ‘You’ve got a kayaker. Oh man, oh no!’ as the two crash.

As the kayak floats upside down, two hand puppets of monsters come into view of the camera as he screams: ‘Oh my god, the carnage!’ 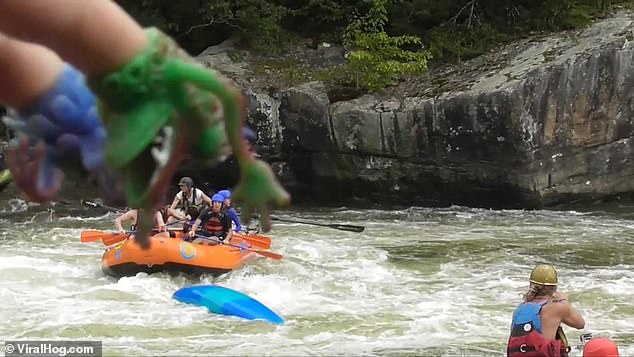 The collision happened on the Pillow Rock rapid on the Upper Gauley River, which is considered an intense white water challenge for even the most experienced rafters

The Gauley River has been rated one of the best rivers to raft in the United States, and its famous Pillow Rock Rapid is an intense challenge even for experienced rafters.

The Upper Gauley River drops over 335 feet in less than 13 miles, resulting in high-volume and technical whitewater from start to finish.

White water rafting season takes place each year in September and October as water levels rise to an ideal level for rafting, drawing enthusiasts from across the world.