A drill music gang who bragged about attacking rivals in a postcode gang feud were jailed for nearly 15 years after one of their own almost bled to death.

The gang from Shepherds Bush waged a ‘tit for tat’ gun and knife war with another gang in Kensington and Chelsea since the summer of 2016.

Both gangs released numerous drill music videos boasting about stabbing or robbing their rivals fueling the violence and in several tit-for-tat incidents gang members were stabbed and shot. 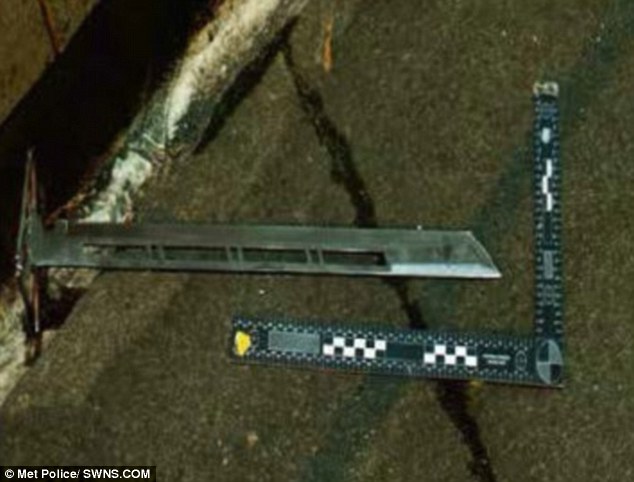 Last September three masked members from Kensington and Chelsea were spotted on a White City estate in Shepherds Bush hunting for rivals to attack.

The Shepherds Bush gang armed with large knives, swords and wooden sticks chased them and stabbed a 16-year-old was stabbed in the back.

Around two weeks after the stabbing, the Kensington and Chelsea gang uploaded a music video called ‘Play for the Pagans’. 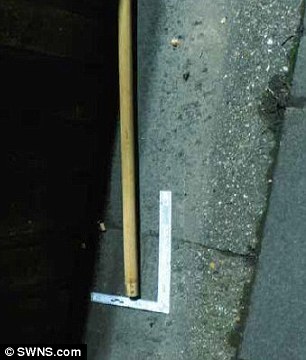 The lyrics included nicknames for rival gang members, including ‘Jeezy’ for Calvin Johnson, 20, who was jailed for four years.

The song described that if ‘Jeezy’ had tripped he would have been ‘dipped’ (stabbed).

A second video called ‘No Hook’, uploaded on October 1, included the lyric: ‘Wit two shanks up creep up like luga leave man cut now the 12s all hot.’

The words referred to one of the three males seen on CCTV footage in a subway carrying two large knives shortly before the 16-year-old was stabbed.

The ’12s all hot’ referenced the fact there were lots of police in the W12 area.

Police were able to trace the gang after the badly injured youth tried to flee but collapsed.

He needed to have blood pumped out of his chest and an emergency blood transfusion.

An investigation uncovered blood and weapons scattered across the White City estate and CCTV identified the gangs.

Detective Constable Steve Renny said: ‘This has been a long and exhaustive investigation aimed not just at bringing to justice those who engage in violent gang warfare, on this occasion almost costing a young man his life, but also curbing activities which allow them to glamorise and incite violence through drill music videos.

‘We are increasingly applying for and being granted Criminal Behaviour Orders to stop young people posting videos and audio online which promote gang activity and violence.

‘The lyrics presented to the court in this case clearly did just that and we know these tit-for-tat videos aimed at goading rival gangs actively lead to violent incidents on our estates. 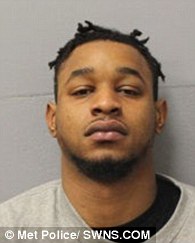 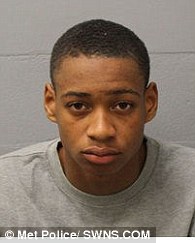 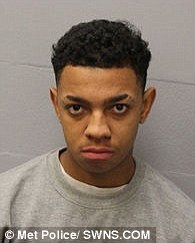 Eight members of the group including the 16-year-old were sentenced at Isleworth Crown Court today (From left to right: Calvin Johnson, 21, Fernando Johnson, 18, Jason Rodgers 19)

‘We are not trying to prevent young people’s artistic expression but when music is being used to encourage violent attacks we must act, as the public would rightly expect us to do so.’

Eight members of the group including the 16-year-old were sentenced at Isleworth Crown Court today for violent disorder and other offences but ninth member, 17, has gone on the run.

Each were also handed a Criminal Behaviour Order lasting up to three years banning them from appearing in any video or audio uploaded to the internet that references gangs, guns and knifes.

The order also bans them from meeting with each other in public, wearing balaclavas or masks in public, entering the borough of Kensington and Chelsea between certain hours and attending Notting Hill Carnival.

Mr Johnson’s brother, Fernando, 18, who has been sentenced to three years and four months, updated his Instagram since the incident with a new drill video entitled ‘Statement’ while on remand. 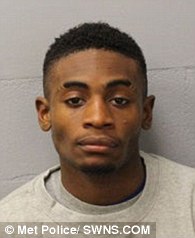 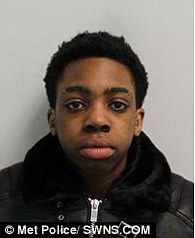 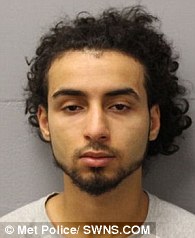 Each of the gang members were handed a Criminal Behaviour Order lasting up to three years (From left to right: Dominic Charles, 19, Malique Campbell-Edwards, 18 and Hamman Abdoulfath, 20)

A Metropolitan Police spokesman said: ‘During the course of the investigation Trident enlisted the help of borough officers for their expertise on local gangs.

‘Together they presented evidence to the courts of a number of drill music videos to demonstrate the tensions between the groups.’

DC Renny added: ‘We have had a positive reception from many social media platforms about tackling this issue and are working closely with them.

‘As with every aspect of policing, we can’t do it alone. If you see a video on social media that causes you concern, then please do report it to us.’