Police seized the huge stash yesterday at the Bel-Air building in Los Angeles, US.

Footage has now emerged of the Bureau of Alcohol, Tobacco, Firearms and Explosives (ATF) laying out the shocking amount of the seized weapons in front of the property.

ATF officials can be seen reviewing the trove of guns, all ranging from different sizes and designs.

A photographer is seen standing over the masses of piles.

The authorities also seized thousands of rounds of ammunition, a large amount of firearms manufacturing equipment and tools from the luxurious property.

A man was arrested on suspicion of unlawful transportation and of giving, lending or selling an assault weapon, the LAPD said.

The Bel-Air mansion is described as a hoarder’s paradise. 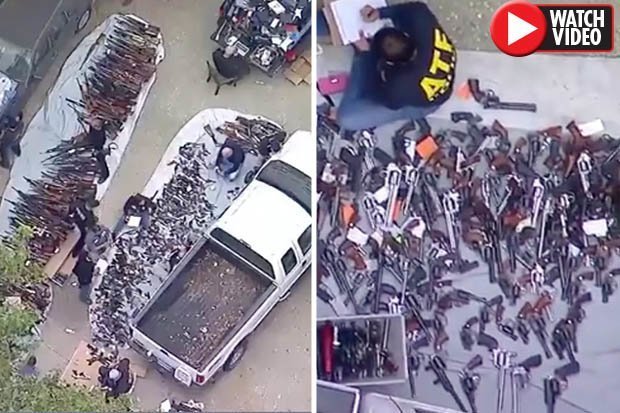 It is located in the upscale neighbourhood favoured by A-list celebs such as Jay-Z and Beyonce.

Tour vans full of customers often pass the property, taking tourists to see the nearby Playboy Mansion and other celebrity homes in the upscale area.

Since the drone footage was uploaded to Twitter yesterday, some 925,000 people have flooded into view in.

One person asked: “Who needs that many guns?”