‘Abide by English laws or get out’: Extraordinary racist rant by drunk man at Polish train passenger who was drinking a beer on late-night train

An astonishing video of a drunk man telling another passenger to ‘abide by English laws or get out’ has emerged online.

A witness began recording the vile exchange when a suited passenger, who admitted he had previously been drinking, began ranting at another man for drinking a beer on the train.

Transport for London (TfL) banned passengers from drinking and carrying open containers of alcohol from its public transport services in June 2008.

While catching the late-night service from London Liverpool Street to Romford the suited man was clearly set on enforcing the rules.

He said: ‘You are in Britain. You listen to the rules, you abide by the rules or you get out. It’s as simple as that.

The man being scolded said the pair should get off the train and speak privately about his drinking, last Thursday. 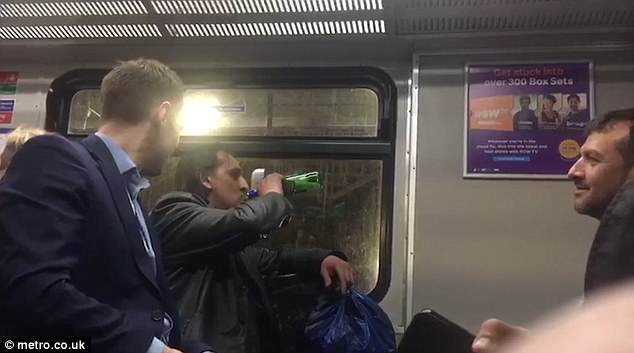 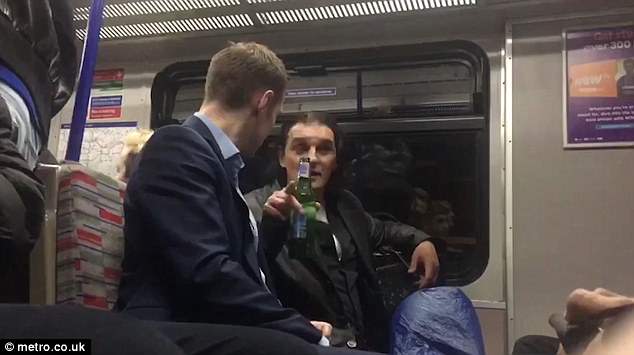 ‘You want to get out?’ he repeatedly asked as the TfL Rail train stopped at Maryland.

‘If not then shut your mouth.’

The drinking man said he would ‘spit’ in his challenger’s face.

The suited man replied: ‘I know you don’t understand but .. I’ll explain so you can understand. You see those rules up there – it’s the ones which say don’t drink alcohol.’

When the man is told he has ‘no right’ to speak to his fellow passenger in that way, and to call the police if he has a problem with drinking, he replies: ‘I was born and bred here

‘You have come into this country,’ he continues.

‘Abide by the rules. Abide by English rules or get out.’

The row becomes heated and the man with the beer gets to his feet to argue back.

He shouts: ‘I am a Polish boy from Russia and will f*** you. 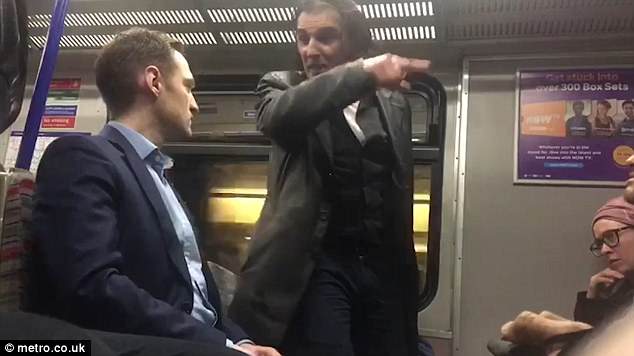 An angry female passenger confronted the pair and moved from the seating area. She told the foreign passenger he should not be drinking, but added the reason for moving carriages was the man who ‘used his race against him’.

She said: ‘People like you bring shame to this country.’

The woman’s intervention appeared to calm the row with the suited man stating: ‘I think we both win.’

A witness told Metro : ‘I’m glad there are people like this lady who aren’t afraid to stand up to bullies.

‘No one else on the train voiced their opinion – only she did and she was half their size.’

The incident reportedly took place on a train from London Liverpool Street to Romford at 11.15pm last Thursday on a TfL Rail service.