That’s not what you want to show off on your coffee table: Eagle-eyed customers spot WHITE SUPREMACY book used as a prop by Wayfair in furniture advert

A Twitter user discovered that furniture manufacturer Wayfair seemingly slipped something into one of its advertisements that isn’t quite coffee table reading in polite society.

The poster, who goes by @TMHaltom on the social media site, noticed that an ad for a Wayfair coffee table had a sample book simply titled ‘WHITE SUPREMACY’ on it.

‘The not-so-subliminal messaging of coffee table books on Wayfair is… a choice,’ he wrote. ‘Why yes, it does appear to say ‘white supremacy’ backwards.’

When reached for comment, a spokesperson for Wayfair told Mail Online that this indeed happened and seemed to suggest the issue was with the supplier.

‘Like other retailers of this product, as soon as we became aware of the issue, we took immediate action to remove the product image from the site and are investigating the matter with the supplier,’ Susan Freschette said in a statement. 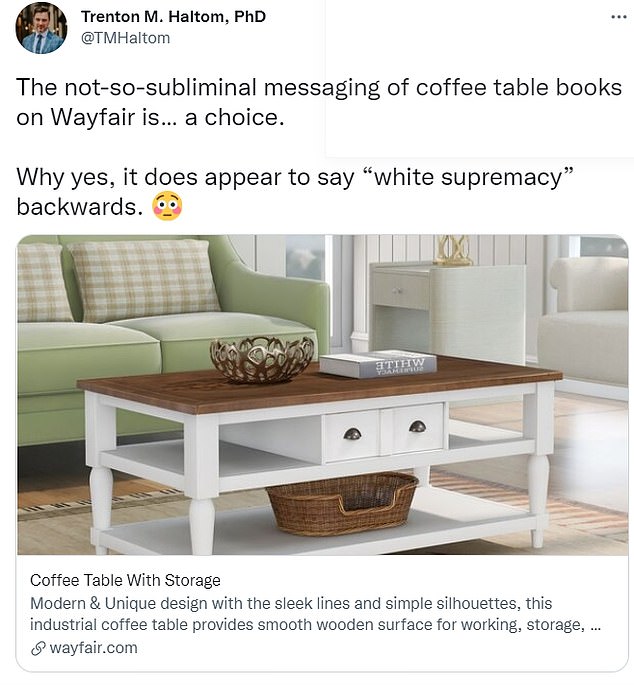 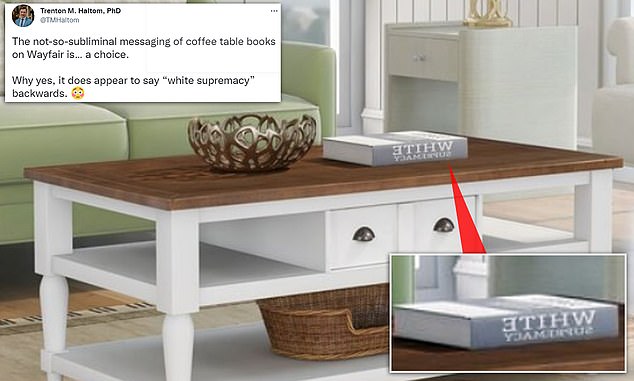 The poster, who goes by @TMHaltom on the social media site, noticed that an ad for a Wayfair coffee table had a sample book simply titled ‘WHITE SUPREMACY’ on it.

Multiple social media users appeared to confirm that this was no hoax.

‘No other book in the prop box?’ asked one.

‘This is actually on their website.. that’s wild,’ said another.

A third promised to boycott Wayfair forever over the advertisement.

One user even suggested people should boycott the company

Another user tweeted out that he had been in contact with the company’s customer service chat line and they had tried to rectify the error.

‘Hello we apologize for that item on the table that you saw and we have reported this to our management teams that photo is in the process of being taken down,’ the representative allegedly said.

‘Our management team will handle the issue from here. 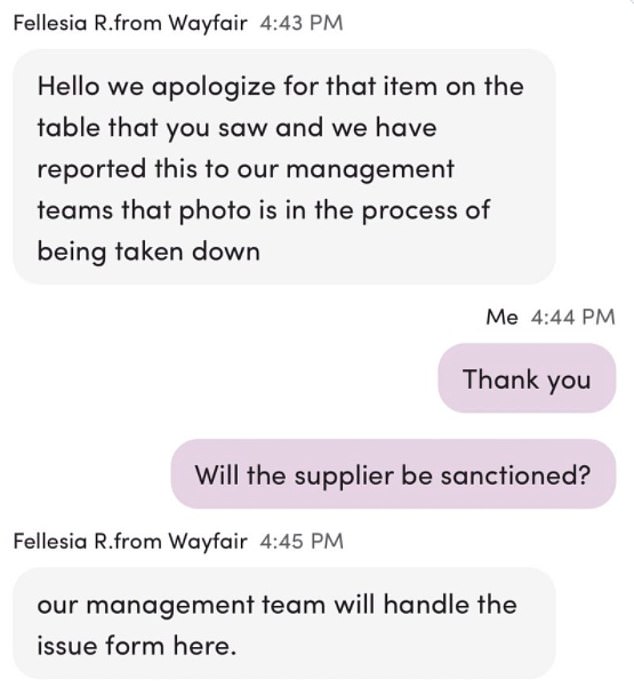 Back in 2020, amid the protests going on in cities across America in the wake of George Floyd’s murder, Wayfair was one of many companies to publicly signal its intention to tackle racism.

‘We can reconfirm our belief that racism in any form (explicit or implicit) is unacceptable in our community, both at Wayfair and the communities in which we live,’ CEO Niraj Shah said. ‘We need to keep saying this, more loudly and even more often. And, we must confront, and change, any examples we find.’ 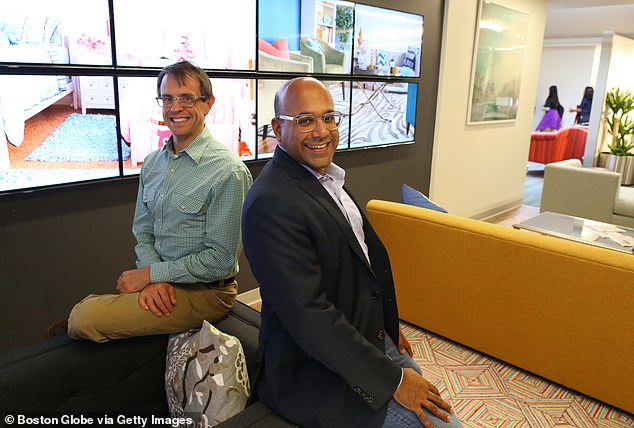 Shah added there were things they can do tangibly to help communities heal.

‘One thing that we can all do is help is contribute to the causes that support ending racism, hatred and violence in our world. For some that contribution may be financial, and to support them, for the next 30 days, we will double Wayfair’s match. For some that contribution is with your time through volunteerism and here too we will double the program that offers paid time for volunteer work.’

He also encouraged workers to vote, offering paid time off for anyone who exercised their right to do so.

Back in 2020, a number of lifestyle influencers used their platforms over the weekend to spread an unfounded conspiracy theory that Wayfair was trafficking children through its website — a baseless claim that has been debunked by various outlets and denied by the company.

The allegation has been floating around social media since June and seems to have originated from the conspiracy-theory group QAnon, according to BuzzFeed News, but it gained traction last Thursday after a post shared on the Conspiracy subreddit went viral.

‘Is it possible Wayfair involved in Human trafficking with their WFX Utility collection? Or are these just extremely overpriced cabinets? (Note the names of the cabinets) this makes me sick to my stomach if it’s true,’ wrote Reddit user PrincessPeach1987. 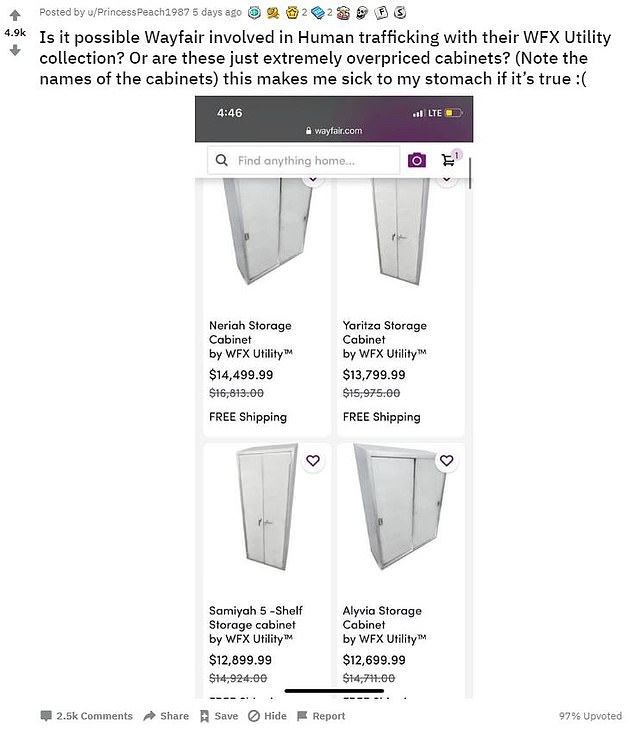 Going viral: The baseless claims gained traction last Thursday after someone posted about Wayfair’s high-priced cabinets on a Conspiracy subreddit

The original poster shared a screenshot from Wayfair’s mobile site that shows four cabinets — named Neriah, Yaritza, Samiyah, and Alyvia — that cost between $12,699.99 and $14,499.99.

Conspiracy theorists believe the extremely expensive cabinets and human names they were given are evidence that Wayfair is trafficking children under the guise of the selling utility closets and other high-priced items.

The unsubstantiated claim appears to have come from QAnon, an online group that believes President Donald Trump is fighting a secret war against deep-state pedophiles.

The theory has been traced back to Twitter user @99freemind, a popular QAnon influencer who is known as Amazing Polly online.

She shared a tweet about Wayfair’s ‘storage cabinets’ that have ‘extremely high prices’ and are ‘all listed with girls’ names’ on July 14. 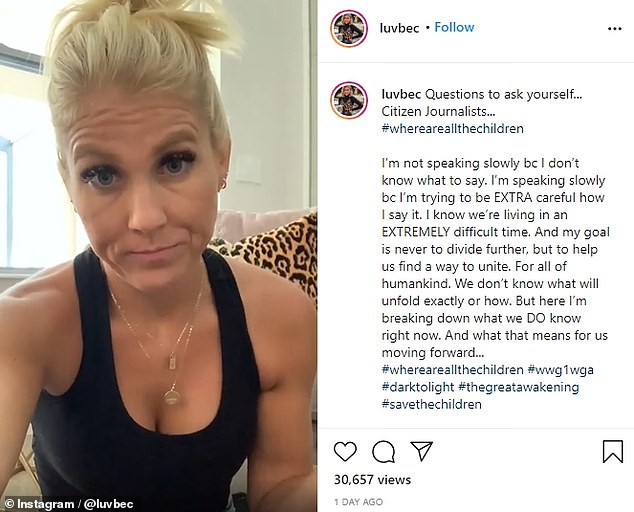 Say what? Influencers such as Rebecca Pfeiffer (pictured) are spreading an unfounded conspiracy theory that Wayfair is trafficking children through it’s website 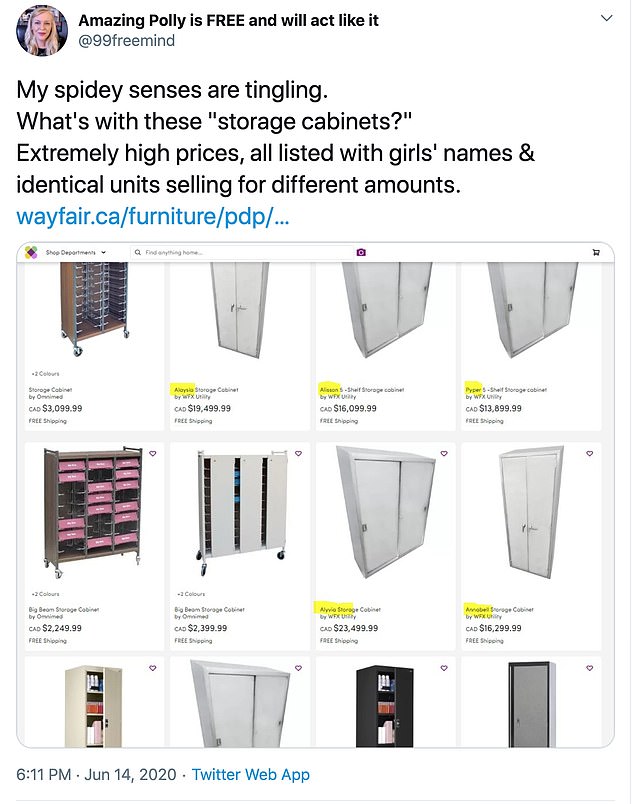 Origins: The theory seems to have originated from QAnon, an online conspiracy-theory group that believes President Trump is fighting a secret war against deep-state pedophiles 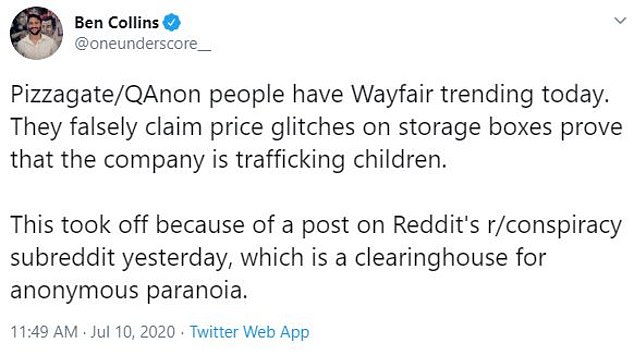 Fake news: NBC News journalist Ben Collins is among those who have condemned the debunked conspiracy on social media

The unfounded allegation spread like wildfire across social media and began trending on Twitter as people shared screenshots of expensive cabinets, shower curtains, and pillows on Wayfair’s website that they found to be suspicious.

People stressed that the items in question had female names while others insisted they matched the names of reportedly missing persons.

Wayfair has denied the allegations and given an explanation for the high price points that many found to be confusing.

‘There is, of course, no truth to these claims,’ the company said in a statement to Reuters. ‘The products in question are industrial grade cabinets that are accurately priced.

‘Recognizing that the photos and descriptions provided by the supplier did not adequately explain the high price point, we have temporarily removed the products from [the] site to rename them and to provide a more in-depth description and photos that accurately depict the product to clarify the price point.’

The conspiracy theory has been debunked by Reuters, Snopes, Facebook’s independent fact-checkers, and other journalists, but that didn’t stop influencers from promoting it on Instagram over the weekend.