A super morgue set up in east London to hold victims of Covid-19 has tripled in size in the last month as the Government extends capacity across the country to cope with 30,000 bodies.

The site at Epping Forest has been extended three times to cope with the increasing numbers and can now care for more than 3,000 bodies.

Several other temporary mortuaries around Britain have also been set up in Manchester, Birmingham and Essex. 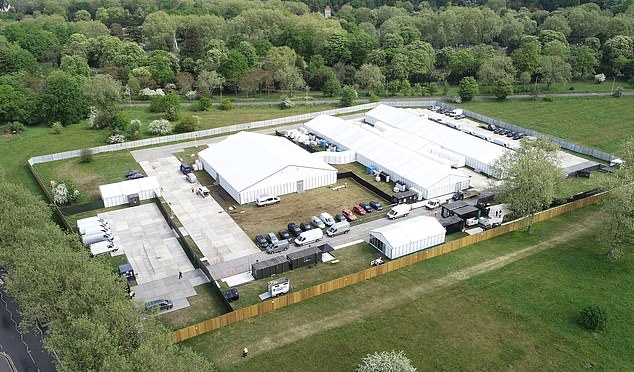 A temporary morgue in Manor Park in east London is being expanded to cope with a maximum of 3,000 bodies 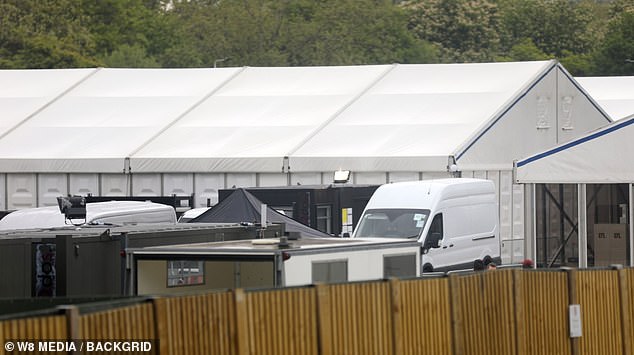 Before the coronavirus crisis, Britain had space for 20,000 bodies in mortuaries, but the Government has brought the figure up to 50,000 and made it a top priority to ensure the dead are cared for with the ‘utmost dignity’ 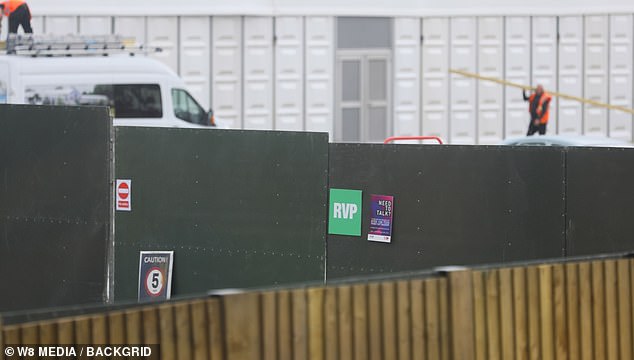 The Government initially said it would be a ‘good result’ if the UK only suffered 20,000 deaths but the number of victims stands at more than 26,000 with the country still very much in the middle of the crisis.

As mortuaries are expanded, special counselling lines and ‘welfare advisors’ are being set up to offer support to staff and undertakers overwhelmed by the amount of death they are facing.

Before the coronavirus crisis, Britain had space for 20,000 bodies in mortuaries, but the Government has brought the figure up to 50,000 and made it a top priority to ensure the dead are cared for with the ‘utmost dignity.’

A Cabinet source said the Prime Minister was adamant there would be absolute respect shown to the dead and everything done to avoid grim cases such as yesterday’s incident in New York where 100 decomposing bodies were found stored in two lorries.

In the UK, provision has been made for up to 1,000 corpses to be stored in Manchester, 2,000 in Birmingham and in Essex there are 916 temporary mortuary spaces.

As the numbers soar, Mail Online can reveal in some cases paramedics and even medical students have been tasked with confirming people have died before they are taken to mortuaries.

A doctor is normally called to the place of death but the change has been made to free them up to help join the battle in saving those affected by coronavirus.

Finishing touches to the third extension of the Epping Forest site – the size of two football pitches – were made today with industrial diggers and workers installing racking and refrigeration.

The area has been hit by the threat of rat infestation and more than 50 black rodent bait boxes, laden with poison, have been placed along the perimeter fencing,10 meters apart. 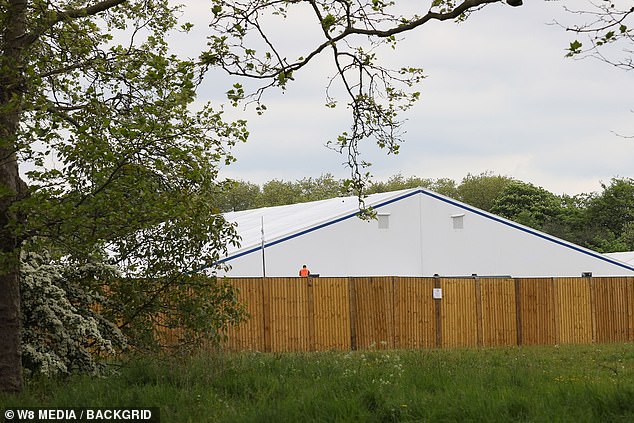 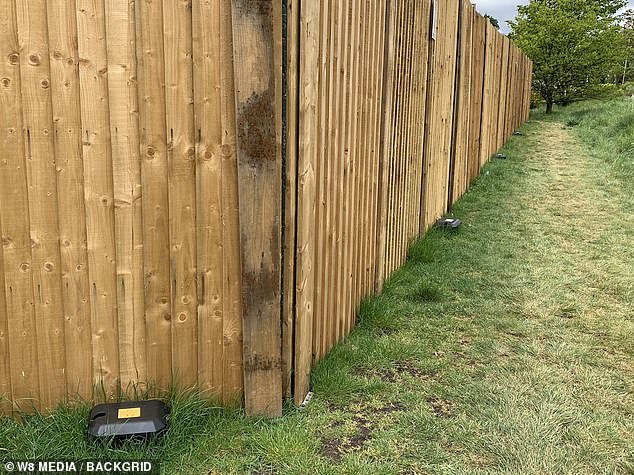 The super morgue, which was originally designed for 1,000, was forced to expand after another temporary mortuary at nearby Leyton, which was built to care for 700 bodies, was suddenly shut down.

One Epping Forest resident who lives nearby said: ‘If they are putting in another mortuary then that clearly and very sadly means more bodies are being brought in than was expected.

‘They must have run out of space. The place is lit up and the refrigerators are buzzing all night. Its then that bodies are mainly brought in and taken way. They are doing well to stop us seeing the depressing coming and going of bodies.’

Another local woman Catriona Clancy, 35, who runs the Lunaria Partners recruitment consultancy, said she found the expansion of the mortuary ‘disturbing’.

She added: ‘It is alarming and distressing to see this facility appear to double in size in such a short space of time.

‘It really brings home the devastating impact this dreadful virus is having on our communities.

‘I walk past it regularly on my daily exercise walk. This is a very beautiful part of East London on the southern boundary of Epping Forest. It is disturbing to have the morgue sited here and to see it expand so rapidly.

‘It is difficult not to think about the poor souls who are taken there and the sadness they leave behind. 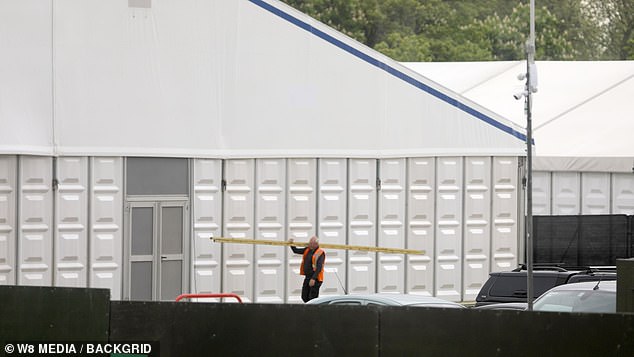 The Epping Forest mortuary is situated on a section of woodland bordered by the busy A116, a cut through which leads traffic towards the North Circular Road, close to the City of London crematorium and cemetery

‘I also worry about how distressing it must be for the people who work inside. There is a constant flow of vehicles entering and leaving at all times of the day.

‘The area is floodlight at night and it is then the eerie hum of the generators can be most clearly heard.’

The Epping Forest mortuary is situated on a section of woodland bordered by the busy A116, a cut through which leads traffic towards the North Circular Road, close to the City of London crematorium and cemetery.

Asked about the latest capacity increase at Epping Forest, a spokesperson for the Strategic Coordination Group said told MailOnline: ‘It is crucial that London has adequate facilities to ensure an effective response to the current COVID-19 outbreak.

‘Several suitable sites have been identified across the capital to host additional mortuary space. These plans are kept under constant review and can be scaled up or down as required.’

In Camden, north London, GPs have been told that some Pandemic Multi-Agency Response Teams (PMART) can call on medical students or paramedics to confirm the death of victims and send information to doctors before death certificates are released to funeral directors.

Usually, family members have to visit registrars to collect medical certificates, but these are now being sent online to funeral directors. 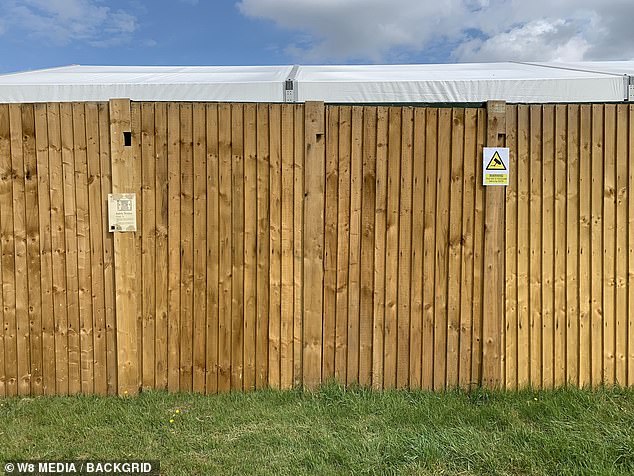 The Government has issued guidelines to funeral directors and chapel attendants to ensure Covid-19 victims are taken directly to the temporary mortuaries ‘as they are’ without initial preparations for burials or cremations to prevent the spread of coronavirus.

Funerals directors are also being asked to ensure only a limited number of close family members or people from their households are allowed to attend services.

A Government spokesman said: ‘We are working with local authorities to undertake contingency planning so we can ensure the public are kept safe, and any tragic loss of life is handled with the utmost respect and care.

‘As part of this work, the government is providing additional capacity to support the NHS and other local responders through these challenging times. We all hope these contingencies will not be needed and that requires everyone to play their part in the national effort.

The National Asociation of Funeral Directors, which represents 80 per cent of Britain’s undertakers, said counselling had been introduced for its members to help them cope with the added stress of helping families of Covid-19 victims.

The NAFD said its members were working under ‘immense pressure and working under very difficult and often distressing circumstances to support bereaved families.

A spokeswoman said: ‘We already know that they’ve arranged almost 30,000 additional funerals, over and above the tens of thousands that they would normally expect to see at this time of year, and this figure continues to grow with every day that goes by.

‘Across the UK as a whole, we believe this is just under a 40% increase across 5 weeks – but some funeral homes, which may only have a handful of staff, are finding themselves doing as much as twice the number of funerals they might normally do.

‘Everything about the way they work has changed. They can’t sit down with families to learn about the person they’ve lost and what will make a fitting farewell, or comfort them when they are upset.’

‘Their role has become about helping families to make sense of a situation they have no control over, and trying to make the small, brief funeral services they are able to hold as special as possible – because being there in person, to say goodbye, is so important to the grieving process.

‘They are working long hours and so their physical and emotional wellbeing is something that we are focused upon.

‘Many staff in larger firms already benefit from health and wellness support, but we’ve set up a counselling service to help all employee of NAFD member firms, so if they are struggling or in need of a bit extra help, there is somewhere they can turn.’

One funeral director told Mail Online that his funeral business had seen a 100 per cent increase in the number of bodies it had been asked to care last month against April last year and that some of the cases had moved him to tears.

Lee Solomon, who runs Lillies undertakers in Sutton Coldfield, said: ‘Everything has changed. In increasingly difficult circumstances, we are doing our best to maintain the utmost level of sensitivity and care.

‘It is very tough to have to tell bereaved families they cannot see their loved ones or their friends that they can’t attend funerals.

‘I was very upset the other day because a family we were helping had to stand outside looking through aground floor window to say farewell to their loved one as we collected the diseased because of Covid-19.

‘Last April we helped with 15 funerals and this April the number has been almost a 100 per cent up at 29. The temporary mortuaries have been brilliant in helping us by allowing us to store the deceased and without a charge.

‘This is a terrible time for all. But maybe it is a shot into the future as well as we are dealing with more and more funerals now which are being streamed for those who have been restricted and across the world for people who otherwise might not have seen the service.’