Last Easter, churches, like so much else, were closed. But supermarkets were open. They are not as different from churches as they seem.

On Good Friday 2020, my wife, Jenny, and I were loading up supplies. We have three teenagers so, as usual, our trolley was bulging with food, not to mention cleaning products. It takes so long to scan everything that we often have time to talk to the person on the register. 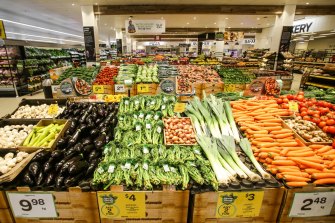 Faith can sometimes be found in the most unlikely of places (even supermarkets).Credit:Dallas Kilponen

My experience of workers at supermarkets has had some highlights. I shudder to recall an occasion on which I was overwhelmed by a kidney stone in one. The young staff was sensational. One minute they seemed disengaged. The next minute reality had knocked on their door in the form of a paunchy man who found himself on the floor of the frozen food aisle. They were concerned about my well-being and dignity. I would say that it restored my faith in humanity except for the fact I had never lost that faith. Young people may sometimes appear nonchalant. But they aren’t. Not really.

The gentleman scanning our consumables on Good Friday had not been a teenager for a few years. He asked us if lockdown was making us hungry or if this was the usual harvest. We had everything except toilet paper, which was still in short supply as hoarders had stocked up, fearing they would face a shortage of something they didn’t need anyway. Most of the world does not use toilet paper. Plenty don’t even have toilets.

We asked him the same question. It turned out the man was a dentist. Early in the lockdown, his business closed because he couldn’t see patients. Having two young children, he was concerned to keep some money coming in. He went to the supermarket and asked for a job. He didn’t care if he was packing shelves or anything else. The pay would be well below what he was used to, let alone the status of the position. Status, he implied, was a puff of smoke.

We were struck by his cheerfulness. Like many people, the man had his world suddenly overturned. Yet now he was doing his best to help his family and the customers, scanning toothpaste along with everything else. He congratulated us on our choice of cheaper toothbrushes saying that, as a dentist, he saw people buying expensive things that didn’t make any difference. By the end, we were laughing, especially when he was forced to scan our chocolate Easter eggs.

This was an Easter moment for us. They occur daily. A wounded person finds new life. The dead are not as dead as we think. We are all rising.

Michael McGirr is a former Jesuit priest and former editor of Australian Catholics.