THE ECONOMY is still 11 per cent smaller than before the pandemic and hold HALF the amount of jobs are being advertised.

Fresh figures from the ONS have revealed the ongoing economic havoc lockdown and the coronavirus crisis wreaked on the UK. 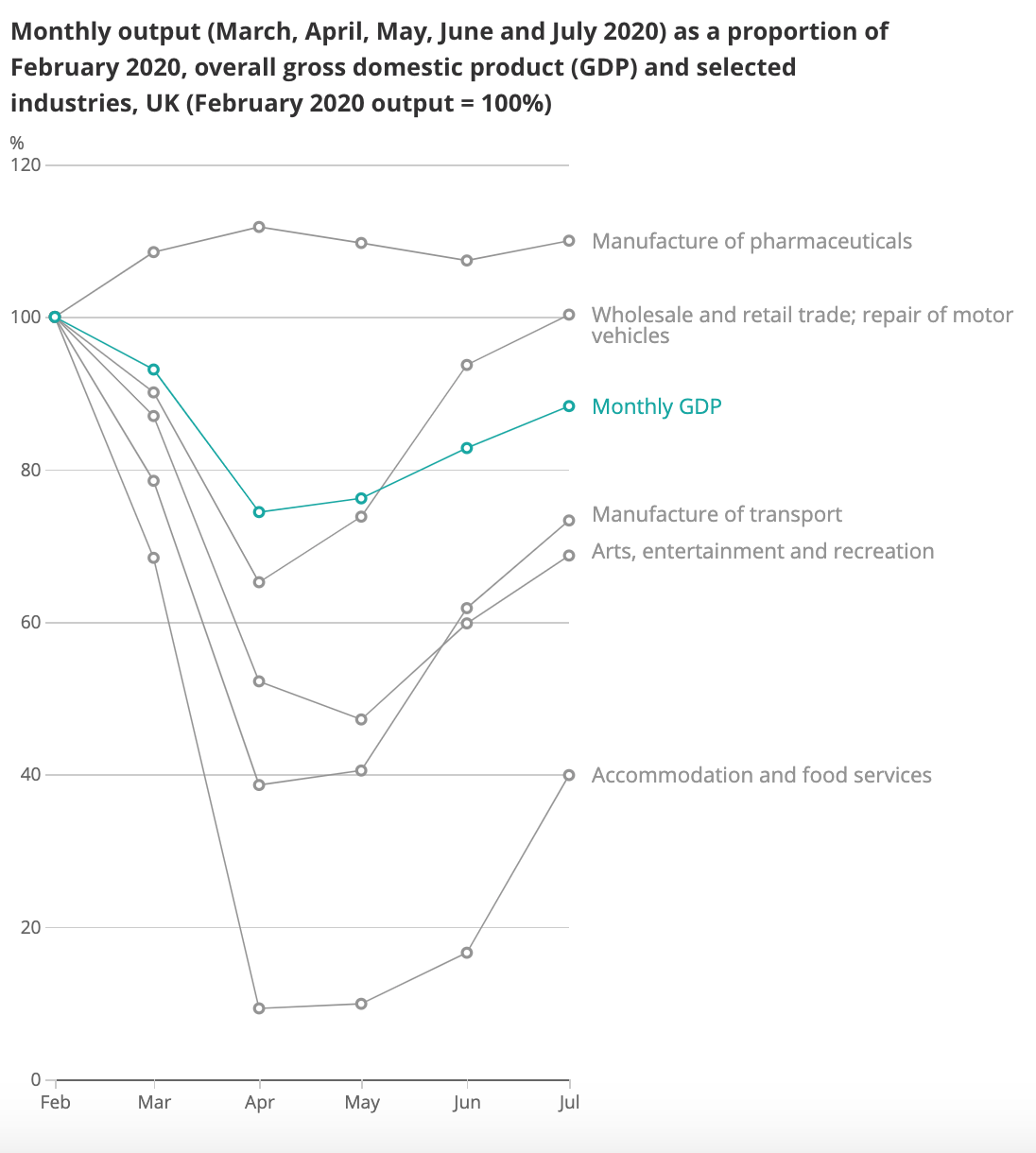 The entire economy has contracted since the start of lockdown, from April to June the economy shrunk by a massive 20.4 per cent, and it is still down 11.7 per cent on pre-pandemic levels.

The largest quarterly decline during the 2008 recession was 2.1 per cent.

According to the new stats, a huge 9.6 million jobs – or one in three – in Britain were furloughed at some point – and young people were hit the hardest.

The proportion of furloughed workers between the age of 16 – 24 years old hit 47 per cent.

And the young have been hit even harder, as they are most likely to work in hospitality jobs, who suffered the initial brunt of lockdown, and sales are still down 60 per cent on pre-pandemic levels.

Less than one in four hospitality businesses were trading between March and May, and they have now been hit by further restrictions with the new 10pm curfew.

The overall number of job vanacies has plummeted by 50 per cent on pre-pandemic levels, but hospitality and entertainment jobs have disappeared the fastest.

Last year there were 4.4 vacancies for every 100 employees in food and accomodation services – that number has sunk to 1.1.

In entertainment, arts and recreation, the number has dived from 3.5 to 0.5.

Both industries have been hit by the latest round of restrictions, with plans to bring back spectators to sports matches and audiences to theatres scrapped as the infection rate for coronavirus has soared.

And Chancellor Rishi Sunak is preparing to outline his plans to ensure Brits aren't unable to make ends meet because of the tough rules, expected to last for six months.

But Mr Sunak is under massive pressure to keep spiralling debt levels down.

According to the ONS almost all sectors have seen declines but those forced to shut up shop during lockdown were hit hardest.

But there were some green shoots of hope in the figures, which said retail sales are back above pre-pandemic levels.

That's despite the number of people visiting the shops nosediving.

Footfall at retail shops fell 89 per cent on last year's levels in April, but has slowly recovered and is now just 12 per cent below the same time last year.

The number of people heading to workplaces and offices was still down 40 per cent on last year's levels last week – before the PM's u-turn in policy telling office staff to work from home again.

The shocking number threatens the livelihood of thousands of businesses relying on commuters coming into town and city centres.

Many of those are pubs and restaurants who will suffer the double whammy of 10pm curfews. Justin Bieber, Benny Blanco Share Acoustic Version Of ‘Lonely’
We and our partners use cookies on this site to improve our service, perform analytics, personalize advertising, measure advertising performance, and remember website preferences.Ok