Elk finally has tire removed from its neck after two years

An elusive elk that has been wandering the hills in Colorado with a car tire around its neck for at least two years has finally been freed of the obstruction, wildlife officials said.

The four-and-a-half-year-old, 600lb bull elk was spotted near Pine Junction, south-west of Denver, on Saturday evening and tranquilized, according to Colorado Parks and Wildlife.

Officers with the agency had to cut off the elk’s five-point antlers to remove the encumbrance because they could not slice through the steel in the bead of the tire.

‘We would have preferred to cut the tire and leave the antlers for his rutting activity, but the situation was dynamic and we had to just get the tire off in any way possible,’ officer Scott Murdoch said. 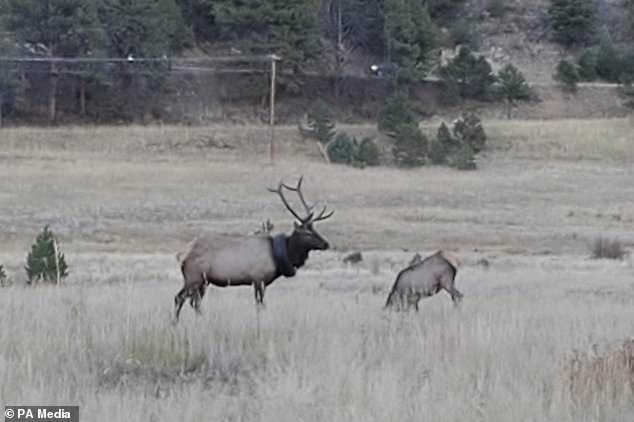 An elusive elk that has been wandering the hills in Colorado with a car tire around its neck for at least two years has finally been freed of the obstruction, wildlife officials said 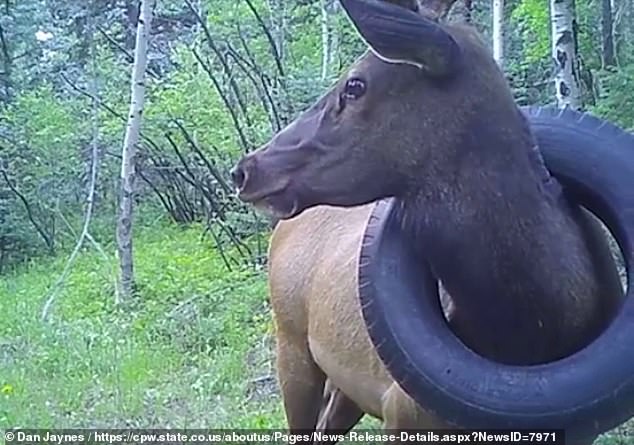 The animal has been spotted a number of times over the last two years, with wildlife officers having made previous attempts to rescue the elk

Mr Murdoch and fellow officer Dawson Swanson estimated the elk shed about 35lb with the removal of the tire, the antlers and debris inside the tire.

Murdoch said: ‘The tire was full of wet pine needles and dirt. So the pine needles, dirt and other debris basically filled the entire bottom half of the tire. There was probably 10 pounds of debris in the tire.’

Wildlife officer Swanson said that they were able to locate the animal after receiving a tip from a local resident.

He said: ‘I was able to quickly respond to a report from a local resident regarding a recent sighting of this bull elk in their neighborhood. I was able to locate the bull in question along with a herd of about 40 other elk.’

The successful operation on Saturday was the fourth time in a week that officers had tried to tranquilize the elk.

Wildlife officers first spotted the elk with the tire around its neck in July 2019 while conducting a population survey for Rocky Mountain bighorn sheep and mountain goats in the Mount Evans Wilderness.

Last year, the agency issued a public appeal for information that would help them locate the elk. 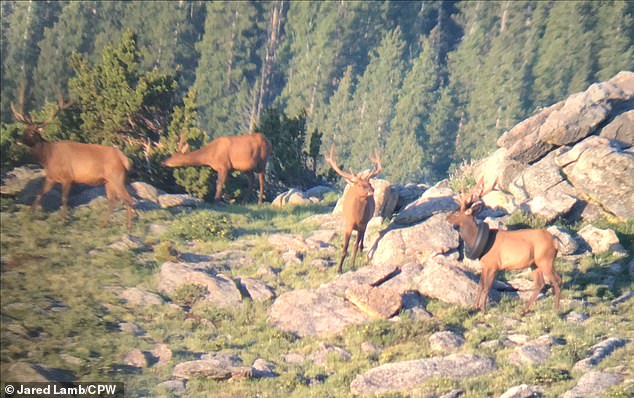 Rangers said the elk (right) had been spotted on surveillance footage several times, and that they had feared for its life before the tire was removed

The organization previously shared footage from one of its trail cameras which showed the animal wandering through the Arapahoe-Roosevelt National Forest with the tube trapped over its head.

Rangers said the elk had been spotted on surveillance footage several times, and that they had feared for its life before the tire was removed.

Speaking to Fox 31 previously, CPW spokesperson Jason Clay said that its not unusual for rangers to discover elk with different objects stuck around their antlers and necks.

‘We see it too often — whether it’s, you know, a hammock caught up in it, Christmas lighting, roping, tire around its neck. Unfortunately, it happens quite a bit here in Colorado,’ he said.

Members of the public had also previously been warned against attempting to remove the tire from around the elk’s neck themselves.