LONDON — For weeks, Prime Minister Boris Johnson has fended off calls to impose another nationwide lockdown on England. But now, confronted with grim projections of a spiraling death toll from the coronavirus, he is weighing plans to lock down the country for as long as a month.

The plans, which were previewed in several British newspapers on Saturday, are in flux and could still fall short of a full national lockdown. But medical experts have warned that the virus is spreading at a rate that will soon overwhelm hospitals if the government does not take draconian action.

Mr. Johnson’s cabinet was meeting on Saturday and the government said he would hold a news conference at 4 p.m. A lockdown would bring England in line with France, Germany, Belgium, and Ireland, all of which have shut down large parts of their societies amid a massive second-wave surge in infections.

As in March, when the virus first engulfed Europe, England has lagged its European neighbors in responding. Mr. Johnson has been caught between members of his Conservative Party, who argue that another lockdown would devastate the economy, and his scientific advisers, who argue that it is unavoidable, given the exponential spread of the virus.

“They have no choice,” said Devi Sridhar, head of the global public health program at the University of Edinburgh. “It’s better today than tomorrow, and it would have been better yesterday than today.”

Under the lockdown being considered, pubs, restaurants and other nonessential businesses would be closed for as long as a month, but schools and offices would stay open. Scotland, Wales, and Northern Ireland have already instituted such restrictions, leaving England as an outlier within the United Kingdom. 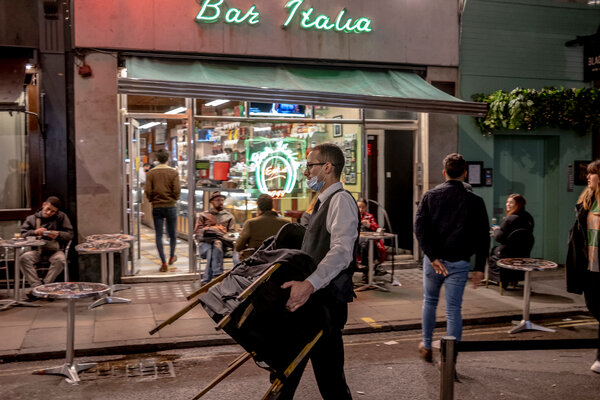 The prime minister’s approach so far has been to order targeted lockdowns in hot spots like the cities of Liverpool and Manchester, while allowing less affected places, like London, to operate more or less normally.

Mr. Johnson has called this strategy a “stitch in time to save nine,” though it has not mollified the authorities in those hard-hit cities, who have complained bitterly that the government was singling them out unfairly.

But the latest numbers suggest the tailored approach is no longer enough.

The government’s scientific advisory panel, known as SAGE, estimated earlier this month that there are between 43,000 and 75,000 new infections a day in England, a rate that is above the worst-case scenarios calculated only weeks before that.

Hospital admissions are also running ahead of the worst-case scenario, the panel said, raising the specter that within weeks, the National Health Service will not be able to cope with the influx of patients. That could drive Britain’s virus-related death toll beyond the 85,000 that scientists estimated could be reached this winter.

On Friday, Britain reported 24,405 new infections and admitted 1,489 patients to the hospital with symptoms of Covid-19, the disease caused by the virus. Nearly 1,000 patients are in intensive care units, while 274 people died.

Britain’s total death toll from the virus is 58,925, one of the highest in Europe.

Politics has colored the debate over how to curb the virus. The leader of the opposition Labour Party, Keir Starmer, called on Mr. Johnson two weeks ago to impose a two-week lockdown that scientists said would act as a “circuit breaker” on the chain of transmissions. He cited a report from SAGE that warned Britain faced a “very large epidemic with catastrophic consequences.”

Mr. Johnson accused Mr. Starmer of failing to take into account the economic fallout from such a move, which has led influential cabinet ministers, including the chancellor of the Exchequer, Rishi Sunak, to raise alarms.

If Mr. Johnson imposes a lockdown now, analysts said, it could hurt him within his party because it will look like he is yielding to pressure from the opposition. But polls indicate that the British public is more sympathetic.

The government is likely to present a November lockdown as a way to salvage Christmas. By cutting the transmission rate, it could relax restrictions in December to allow families and friends to celebrate together.

British papers have been full of headlines about whether Mr. Johnson will “cancel Christmas.” He has insisted that he wants university students to be reunited with their families during the holidays.

While medical experts generally applauded the reports of an impending lockdown, some questioned why the government did not act sooner, like during the midterm school break, which began earlier this month, as public-health experts proposed.

Others said the government still had not fixed its test-and-trace system, which continues to fall far short of its goals. Until it does that, experts said, Britain would not be able identify and try to break the chains of transmission — setting the stage for further outbreaks after the lockdown is lifted.

“You use lockdowns to build up test and tracing,” Ms. Sridhar said. “We will be stuck in these cycles of lockdown and release until they decide we can’t live with this virus because it’s killing our economy.”