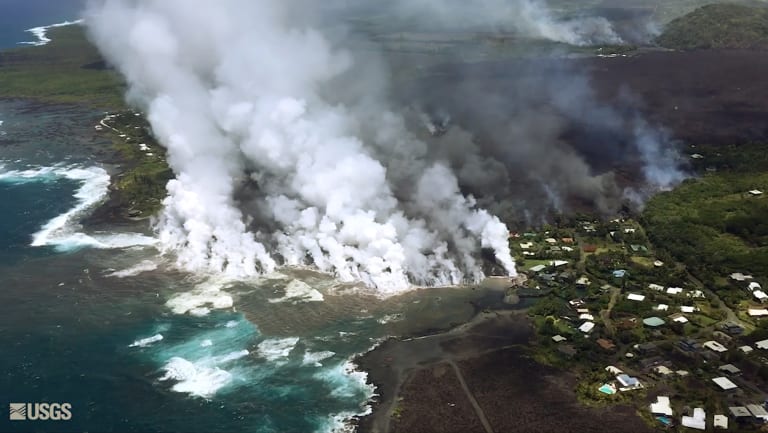 After overrunning the town and destroying hundreds of homes, lava from the Kilauea Volcano flowed into the shallow Kapoho Bay, in Hawaii’s Big Island, and filled it.

Molten rock entirely covered Vacationland and only a few buildings remained in the nearby Kapoho subdivision, officials with the US Geological Survey said.

"The bay is completely filled in and the shoreline is at least 0.8 miles [1.2 kilometres] out from its original location," said Geological Survey geologist Wendy Stovall. "Vacationland is gone, there is no evidence of any properties there at all. On the northern end of that, there are just a few homes in the [Kapoho] beach lots area." 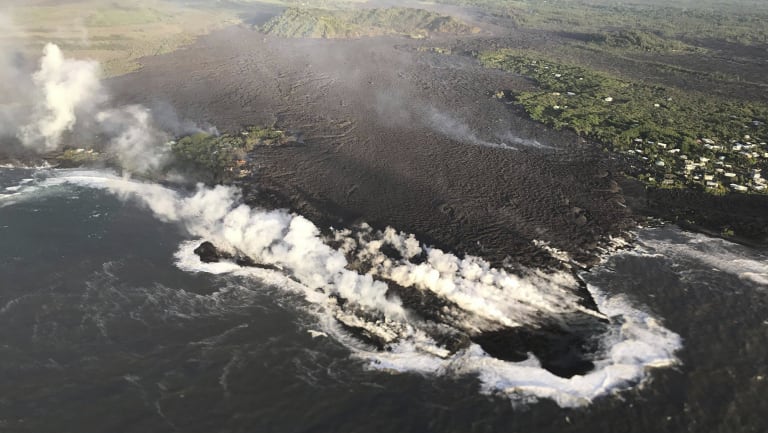 Resident Mark Johnson is hopeful that his home on a citrus farm is one of those still standing. His ocean-view property sits on a ridge near the base of Kapoho crater, and he thinks the lava could have missed it.

"Basically we are up on that hill, so we're still OK right now," Johnson said. 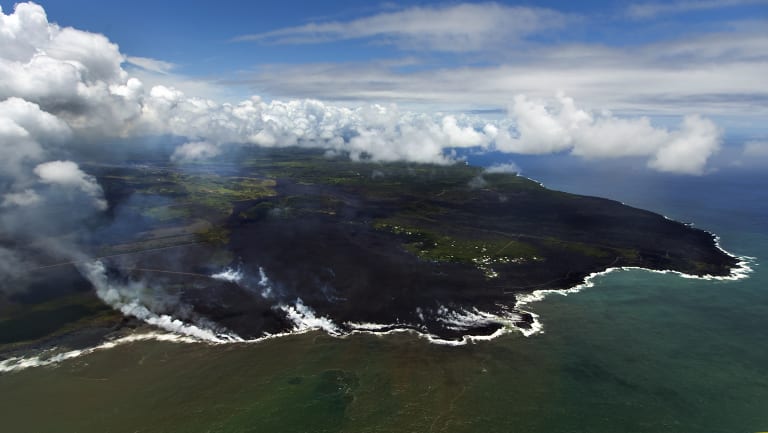 Most of the Kapoho area, including rock pools, is now covered in fresh lava.

But he has resigned himself to the possibility that he could lose his beloved farm, which he can't access even if lava doesn't cover it. The property isn't far from a crater lake that the approaching flow vaporised days before entering his neighbourhood.

"I'm kind of at peace, actually," Johnson said of potentially losing his home of 28 years. "I feel that I've had a really great experience."

County officials said the two subdivisions have 279 homes, and most are feared destroyed from the most recent lava flows in the low-laying area.

"Over the course of essentially two days, that entire area was covered by lava," Stovall said. 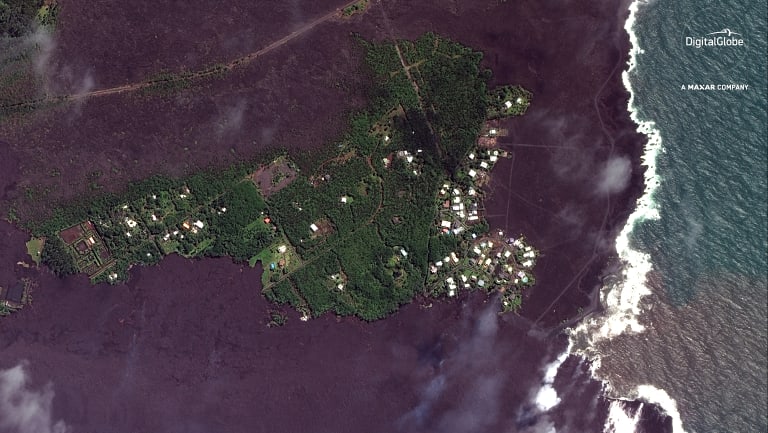 Lava flows on most of Kapoho Bay, creating a new foreshore.

Molten rock from the erupting Kilauea volcano already has destroyed at least 117 homes in the Lanipuna Gardens and Leilani Estates where lava surfaced more than a month ago. The total number of homes destroyed in the eruption stands at about 400. 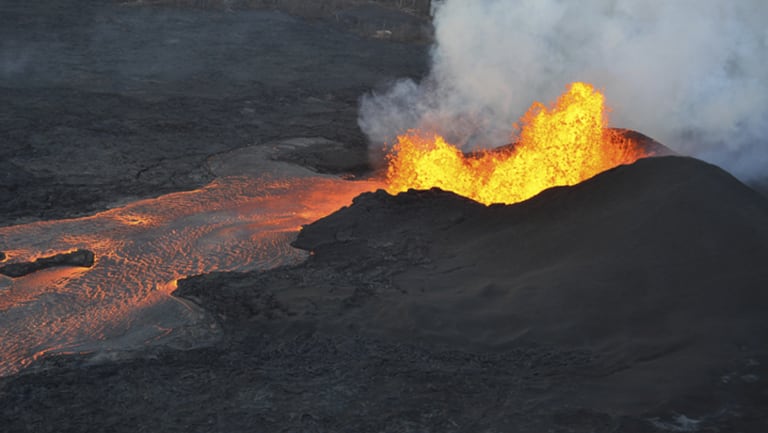 Lave sprouts at a fissure near Pahoa in Hawaii on Tuesday.

Scientists are still recording vigorous volcanic activity. While only one crack in the ground is spewing molten rock and the height of lava spewing has decreased in recent days, "it's still really impossible to tell," when it will end, Stovall said.

On Wednesday, local time, a magnitude 5.6 earthquake struck Kilauea's summit, sending ash and rock about 3048 metres into the sky.

The lava inundation is among the most destructive and costly in volcano property loss in US history. While no one has been killed and only one lava-related injury has been reported, the number of destroyed homes dwarfs other recent American eruptions.

It comes as the toll of the Volcano of Fire in Guatemala rose to 99 dead and nearly 197 missing.

In Hawaii, previous eruptions have destroyed small towns, but nothing on the scale of this outbreak. Lava flows destroyed homes and other buildings in the same area in 1955 and 1960, but the town of Kapoho was less densely populated at that time.

Between 1983 and 2014, a Kilauea eruption razed homes in and around the town of Kalapana. Over the course of about eight months in 1990, 214 homes were destroyed in that area. One home was lost in a separate 2014 lava flow in the commercial hub of Pahoa.

Even major explosive eruptions like that of Washington state's Mount St Helens in 1980 didn't result in the same number of homes lost. That volcano and others in the region that have had recent eruptions are very remote with few people living nearby.

At Kilauea's summit, increased earthquake activity has led to explosive eruptions, some of which have shot rock and ash high into the air.

"We expect larger explosions will continue at the summit," Stovall said.

Jessica Ferracane, spokeswoman for Hawaii Volcanoes National Park, was on the summit on Wednesday and said three "sizable" earthquakes hit in the two hours she was there.

"It's a beautiful blue day, but it really seems eerie up there, lots and lots of ash covering areas near Jagger Museum and the earthquakes really make things seem very unsettled," she said.