Brussels: The European Union imposed sanctions on Friday on 40 officials suspected of election misconduct and a brutal security crackdown on protesters in Belarus, which quickly retaliated by announcing its own sanctions against the EU and recalling its ambassadors from Poland and Lithuania.

Russia, in turn, said it would follow Belarus' lead on sanctioning officials in the 27-nation European bloc, while the US Treasury Department said it had followed the EU and imposed sanctions on eight Belarusian officials. 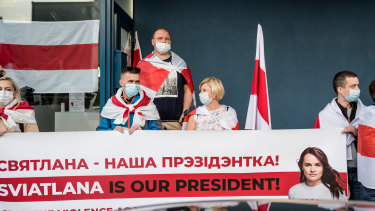 Svetlana Tikhanovskaya, the exiled opposition leader of Belarus, attends a protest against political repression in Belarus in Vilnius, Lithuania.Credit:Getty

The individuals subject to the sanctions that EU leaders endorsed overnight do not include Belarusian President Alexander Lukashenko, whose disputed re-election to a sixth term has triggered nearly eight weeks of protests and a government crackdown on peaceful protesters, opposition activists and journalists.

The EU leaders suggested that Lukashenko, once dubbed Europe’s last dictator, could be subject to sanctions later if he did not enter into talks with his country's political opposition. In the meantime, those targeted include Interior Ministry, police and security officials, as well as members of the Belarus Central Electoral Commission.

“This sends a strong message of EU support to the democratic right of the Belarusian people to elect their president through free and fair elections, and our condemnation of repression and violence against people exercising their fundamental rights,” EU foreign policy chief Josep Borrell said.

The leaders also urged the EU’s executive arm, the European Commission, “to prepare a comprehensive plan of economic support for democratic Belarus”. 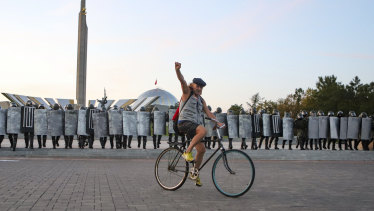 A protester rides a bicycle in front of police during an opposition rally to protest against the presidential inauguration in Minsk, Belarus.Credit:AP

The Foreign Ministry of Belarus gave no details about its retaliatory sanctions list, but warned of “more serious consequences” such as pulling out of joint projects or revising the country's diplomatic relations with the EU if the bloc ratchets up “the sanctions flywheel”.

“Belarus is always, in words and in deeds, against confrontation. We are for dialogue and understanding. But as a sovereign state, we’re also determined, albeit not without regret, to respond to unfriendly actions in order to naturally defend our national interests,” the ministry said in a statement.

Russian Foreign Ministry spokeswoman Maria Zakharova criticised the EU’s move and said Moscow would adopt the Belarusian sanctions list since the move would be in line with Russia's obligations under its union agreement with Belarus, a former Soviet republic.

In Washington, the Treasury Department said the individuals subject to new US sanctions included Belarus' Interior Minister, his deputy, and two top members of the country’s election commission who “are responsible for, or have participated in, undermining democratic processes in Belarus”.

Several law enforcement officials were also targeted by the sanctions, which include a freeze on any assets they may have in US jurisdictions and a ban on Americans conducting business with them.

“The Belarusian people’s democratic aspirations to choose their own leaders and peacefully exercise their rights have been met with violence and oppression from Belarusian officials,” Treasury Secretary Steven Mnuchin said. “The United States and our international partners stand united in imposing costs on those who have undermined Belarusian democracy for years.”

EU agreement on the sanctions was held up for weeks by one of the smallest member countries, a standoff that embarrassed the world’s biggest trading bloc. Cyprus used its veto to block the action, which required a unanimous vote of the 27 EU members.

Cyprus wanted its EU partners to impose sanctions against Turkey too, for its energy exploration work in waters where the Mediterranean island nation claims exclusive rights, before it would agree to the Belarus sanctions. The deadlock was broken just after midnight when the leaders issued a statement in Cyprus' support and criticised Turkey.

Cypriot President Nicos Anastasiades said on Friday he was pleased with the EU summit’s conclusions because his goal of rallying fellow European leaders behind a demand to hold Turkey accountable for “unlawful actions” in Cypriot and Greek waters had been met.

Cyprus said it agreed with other European Union members to forgo more sanctions on Turkey in order to give diplomacy “another chance” at getting Ankara to halt its hydrocarbon prospecting in its waters and to ease tensions.

Sanctions against Turkey “were never an end in themselves”, Anastasiades told reporters in Brussels. At the same time, he said EU leaders have left the door open to impose them at their next scheduled summit in December, if Ankara doesn’t cease and desist by then.

“I repeat that the responsibility and the burden for what comes next are on Turkey,” he said.

Anastasiades’ remarks appeared designed to save face after his government strongly suggested in the run-up to the summit that it would accept nothing less than fresh sanctions against Turkey. Cypriot officials had said sanctions would drive the point home that EU pronouncements of solidarity with member states must be backed up with actions.

Two Turkish vessels escorted by warships continue a search for gas inside Cyprus’ exclusive economic zone. A similar move by Turkey in August in an area that Greece claims falls within its continental shelf sharply raised military tensions between the two NATO allies. Those tensions subsided after Turkey pulled the research vessel back, opening a window for negotiations on delimiting the two countries’ maritime borders.

Turkish Foreign Minister Mevlut Cavusoglu dismissed the summit’s conclusions as aiming only to satisfy members Cyprus and Greece while making “veiled threats to impose sanctions”. He also criticised the EU for calling Turkey’s operations in the eastern Mediterranean “illegal”.

The EU extended a carrot as well as a stick to Turkey, agreeing that if Ankara reacted positively in talks with Cyprus and Greece, the bloc would “launch a positive political EU-Turkey agenda” with trade and customs incentives.

If not, the leaders said, “the EU will use all the instruments and the options at its disposal” to “defend its interests and those of its member states”.

Greek Prime Minister Kyriakos Mitsotakisakis echoed his Cypriot counterpart, saying EU leaders “had made it clear, with absolute certainty” that EU-Turkish relations would remain in a deep freeze if Turkey continued its “aggressive behaviour”.

The Greek Prime Minister repeated that if talks with Turkey on a maritime border deal fell through, Athens would be prepared to take the matter to the international court at the Hague.