A multi-millionaire former first lady of Australia has sparked outrage after calling for sunbathers to be arrested for going to the beach amid the country’s draconian lockdown rules.

Therese Rein, the wife of former Labor Prime Minister Kevin Rudd, responded to a tweet about the ‘insanely busy’ Balmoral Beach near Sydney.

The 63-year-old, who lives in a waterfront mansion on Queensland’s Sunshine Coast with its own 40ft pool and cinema room, asked: ‘Why are they not being arrested?’

Furious Twitter users pointed out it’s not illegal to be outside with other members of the same household, with ‘singles bubble’ partners or for exercise and recreation – if within 5km of home and for those who live outside the areas of concern.

Australia is still in the grip of a surge in cases, with 1,578 new infections recorded on Monday, although the death toll has remained low. 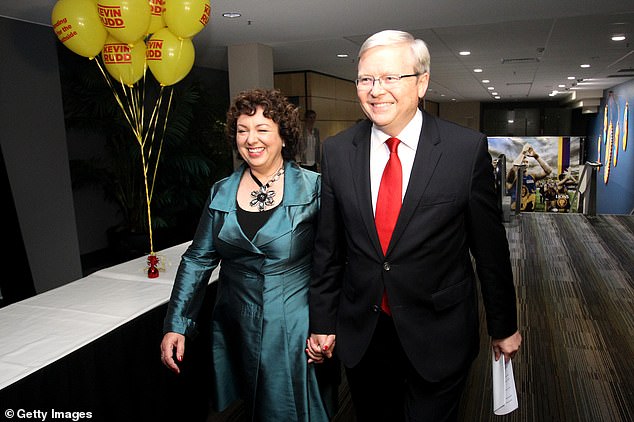 Therese Rein, the wife of former Labor Prime Minister Kevin Rudd, (pictured together in 2018) copped a brutal backlash online after asking why Sydney sunseekers are not being locked for being outside 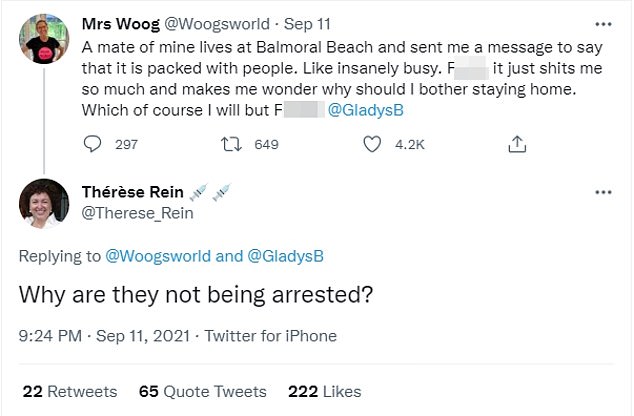 The 63-year-old who was once awarded a medal for her dedication to human rights demanded to know ‘why are they not being arrested?’ 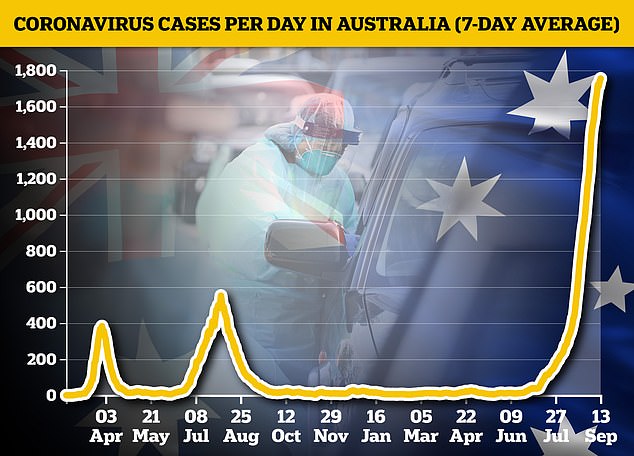 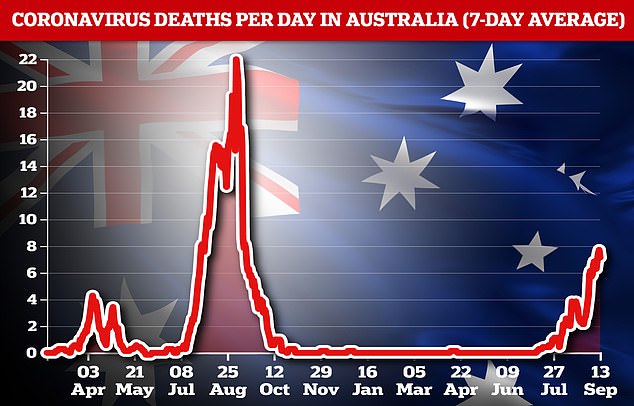 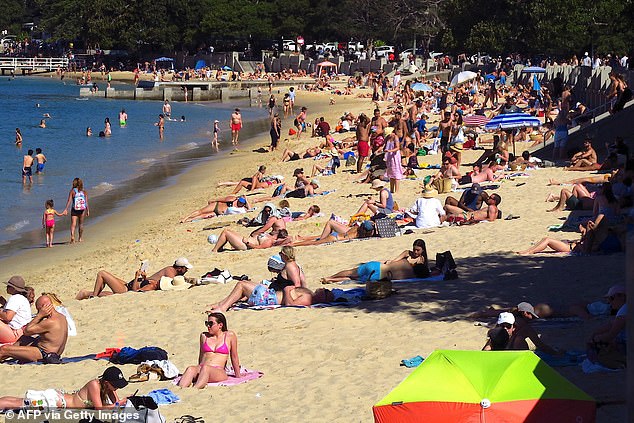 Many packed the beaches on Sydney over the weekend as temperatures soared, with Balmoral Beach (pictured) full of sunbathers

What are Australia’s harsh Covid rules?

Australia was the envy of the world for much of last year after it managed to control the spread of Covid and carry on with relatively few restrictions.

But the Delta variant has caused a huge surge in infections among the mostly unvaccinated population.

In response, states have imposed harsh lockdowns in an effort to stop the spread until more people are jabbed.

In Covid hotspots such as Sydney, outdoor recreation is allowed but local government areas of concern are subject to tighter stay-at-home rules.

From Monday, residents in the 12 areas of concern are now able to leave home within 5km for recreation and exercise if they are fully vaccinated.

Since the regions are in the west and south-west of Sydney, this makes most beaches and public places out of reach.

In the rest of New South Wales, some areas have emerged from lockdown but others are under stay-at-home orders.

One region was plunged back into a two-week lockdown after a single case was recorded.

Other states are subject to different rules, with Victoria easing measures on Thursday, opening schools and allowing weddings for 10 people, apart from its capital of Melbourne.

Residents of greater Melbourne have to stay home between 9pm and 5am and can only head out for essential shopping, exercise or work.

New rules from Monday have eased the restrictions even further allowing up to five fully-vaccinated to locals to meet up outdoors for picnics.

While it’s possible to catch Covid outside, it is extremely rare – with people generally having to be in close proximity – less than two metres – for a ‘significant’ period of time.

‘Imagine sitting in your mansion in Queensland with Kevin07 calling for people interstate to get arrested for going to the beach,’ one commenter said.

Others wrote: ‘Because they’re not criminals hun’ and ‘because we don’t arrest people for being in a public place that they are permitted to be in’.

‘I know this is challenging for a lot of people to understand. But, after lengthy research into the details of current restrictions, it appears that it is not technically illegal to be outside,’ another said.

Thousands who have been living under stay-at-home orders in Sydney for more than 13 weeks descended on the city’s beaches over the weekend as temperatures climbed to 30C.

Beaches from Manly in the north to Cronulla in the south saw jam-packed crowds with Bondi and Coogee full of sunbathers.

Woollahra Council was even forced to rope off Camp Cove at Watson’s Bay and Redleaf beach at Double Bay, after massive crowds swarmed the popular harbourside spots.

Many followed Covid protocols by visiting with just one friend and wearing a mask, but police were out in force reminding sunseekers to follow public health orders – as the number of new coronavirus cases continues to hover between 1,200 to 1,500 each day.

Photos showed officers approaching scantily-clad Bondi residents to tell them to wear face coverings while they were not swimming, surfing, walking, or jogging.

Sydney residents face $500 fines for not wearing a mask ‘in all indoor or outdoor areas, other than a place of residence’.

But infectious disease professor Peter Collignon said the risks associated with outdoor transmission are actually extremely scarce – about 20 to 30 times lower than indoors. 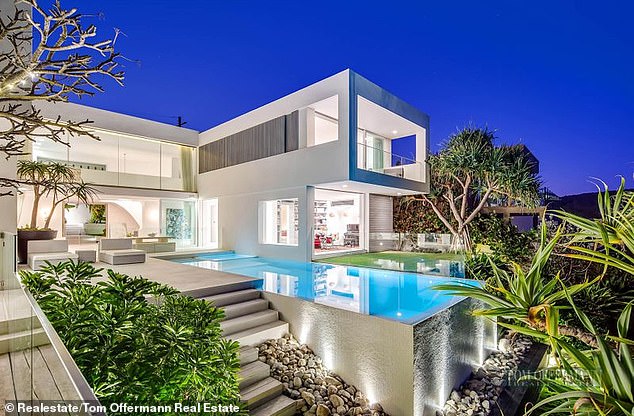 Ms Rein lives in this mansion on Queensland’s Sunshine Coast. It boasts  a 12-metre pool and a cinema room 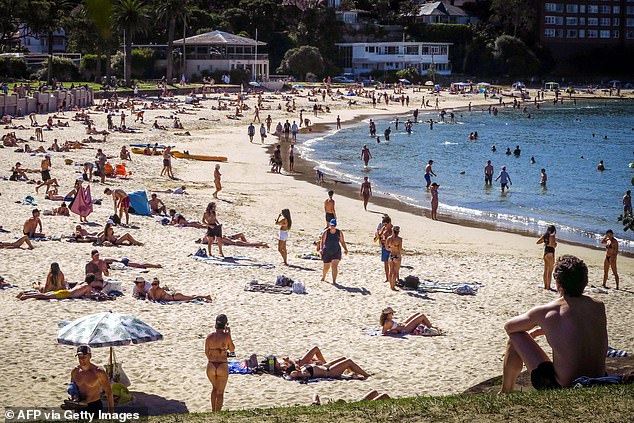 ‘Essentially, if you are outdoors and particularly if you keep your distance of two metres, you’re very unlikely to get the virus. If you’re outdoors and you’re closer than that [for significant periods], then wear a mask,’ he told Daily Mail Australia.

‘I think we shouldn’t discourage people from going outdoors. It is safer to spend time with your family outdoors than it is indoors.

‘Secondly, there’s an emotional and psychological cost of staying inside for so long.’

But despite the barrage of criticism levelled at Ms Rein for her comments about beachgoers, many on social media agreed with the respected rehabilitation counsellor and social entrepreneur.

Others accused Liberal Party Premier Gladys Berejiklian of ‘giving up’.

Another wrote: ‘Death doesn’t care who you are… this pathogen has been unleashed now… these people will find out soon enough.’

Stay within your local government area, or within 5km of your home.

If travelling by a private vehicle, do not share it with people you do not live with, except your ‘singles bubble’ buddy.

You can exercise with one other person that you do not live with, or your ‘singles bubble’ buddy.

If you live with more than two other people, you can all go out together for exercise or recreation

Recreation includes outdoor leisure activities such as sitting for relaxation, or to eat, drink, or read outdoors.

But masks must be worn during outdoor recreation, and at any time when not exercising, and you must have one on you at all times.

From Monday, September 13, up to five fully-vaccinated residents can meet up for picnics outdoors as long as the residents live outside the 12 LGAs of concern in Sydney’s west.