Minneapolis: Derek Chauvin, the former Minneapolis police officer who was filmed with his knee on George Floyd's neck and who is now facing murder charges for Floyd's death, posted bond and was released from jail on Wednesday morning, local time.

State correctional records show Chauvin was transferred from a state prison facility in Oak Park Heights, Minneapolis, where he had been held since he was arrested in May, to the Hennepin County Jail in Minneapolis early Wednesday. Court records show he posted a conditional $US1 million bond ($1.4 million) and was released from custody just before noon. 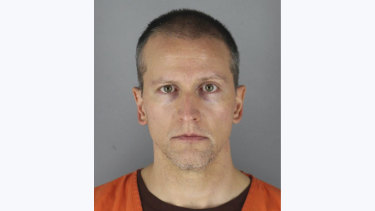 Former Minneapolis police Officer Derek Chauvin, who was arrested for the May 25 death of George Floyd, has been released.Credit:AP

Eric Nelson, Chauvin's attorney, confirmed his client was no longer in custody, but he declined to comment further.

Chauvin, 44, was the last of the four former Minneapolis police officers charged in Floyd's killing to be released from jail as the court case is pending. A 19-year veteran of the Minneapolis Police Department before he was fired in May, Chauvin is facing second-degree murder and manslaughter charges in Floyd's death. Three other officers on the scene – J. Alexander Kueng, Thomas K. Lane and Tou Thao – are charged with aiding and abetting.

A Hennepin County judge is weighing whether all four former officers will be tried jointly. A tentative trial date has been set for March 2021.

Chauvin's release is likely to spur tensions in a city that has remained on edge since Floyd's death and where many buildings throughout downtown Minneapolis remain boarded up amid ongoing concern about civil unrest. A Minneapolis official, who spoke on the condition of anonymity because the official was not authorised to speak publicly, said the city was made aware early Wednesday of Chauvin's possible release and "planned accordingly" but declined to provide specifics. 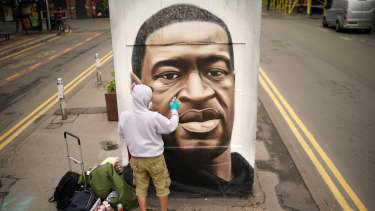 The death of George Floyd has sparked protests around the world: Graffiti artist Akse spray paints a mural of the man in Manchester.Credit:Getty Images

It is unclear where Chauvin might go. Under bail conditions, he is not allowed to leave Minnesota. His former home in the Twin Cities suburbs was recently sold. Members of his family have repeatedly declined to comment on his arrest, though unidentified relatives last month launched an online fundraiser through the site Give Send Go seeking to raise funds for Chauvin's bail fund.

A message posted there last week said the fundraising "has been slower than what we had expected." As of Wednesday, the fund had raised just less than $US4000.

Chauvin, along with his estranged wife Kellie, also is facing felony state tax evasion charges. Prosecutors in Washington County, Minnesota, say Chauvin underreported and underpaid state taxes dating to 2014 and did not report more than $US95,000 he earned working as an off-duty security guard.