Exploding Russian rocket DID send huge cloud of radioactive gas across nearby town, officials confirm – but insist levels returned to normal and there is no health risk

New details have emerged about a brief spike in radioactivity following a mysterious explosion at the Russian navy’s testing range that has been surrounded by secrecy and fueled fears of a radiation leak.

The explosion on August 8 in Nyonoksa on the White Sea killed two servicemen and five nuclear engineers and injured six others.

The authorities reported a rise in radiation levels in nearby Severodvinsk, but insisted it didn’t pose any danger.

Russia’s state weather and environmental monitoring agency Rosgidromet said yesterday the brief rise in radiation levels was caused by a cloud of radioactive gases containing isotopes of barium, strontium and lanthanum that drifted across the area. 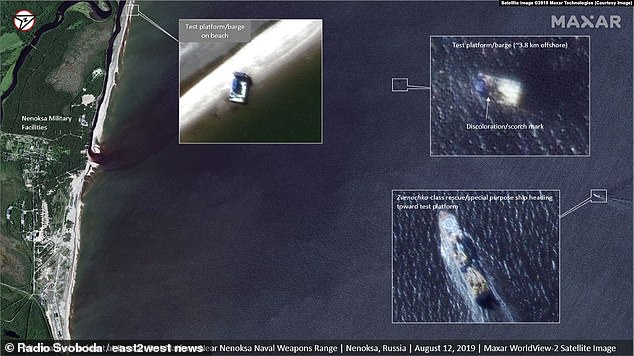 There were dramatic satellite pictures (pictured) of the pontoons, which were some two-and-a-half miles offshore when the accident happened 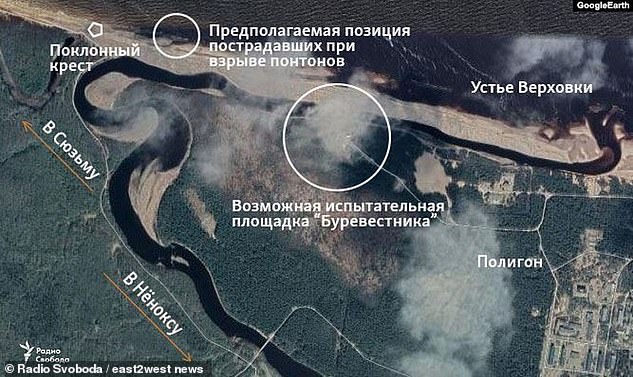 The agency said its monitoring has found no trace of radiation in air or ground samples since the day of the explosion.

It has previously said that the peak radiation reading in Severodvinsk on Aug. 8 briefly reached 1.78 microsieverts per hour in just one neighborhood – about 16 times the average.

Readings in other parts of Severodvinsk varied between 0.45 and 1.33 microsieverts for a couple of hours before returning to normal.

The authorities said those readings didn’t pose any danger, and the recorded levels were several times less than what a passenger is exposed to on a long-haul flight.

Alexei Karpov, Russia’s envoy to international organizations in Vienna, told the Comprehensive Nuclear Test-Ban Treaty Organization on Monday that ‘the tragic accident that occurred has nothing to do with nuclear tests.’

But, he said, the tests at the range ‘were related to the development of weapons, which we had to start creating as one of the retaliatory measures in connection with the U.S. unilateral withdrawal from the Anti-Ballistic Missile Treaty in 2002,’ according to a Russian foreign ministry transcript. 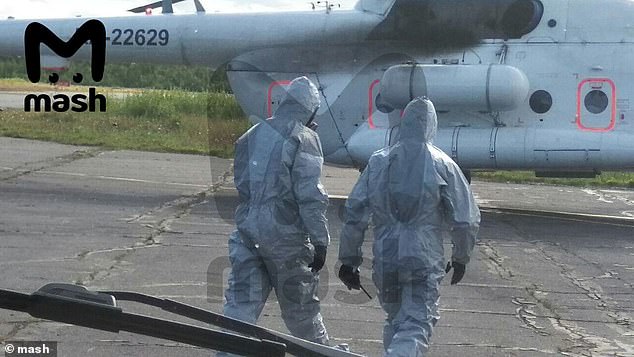 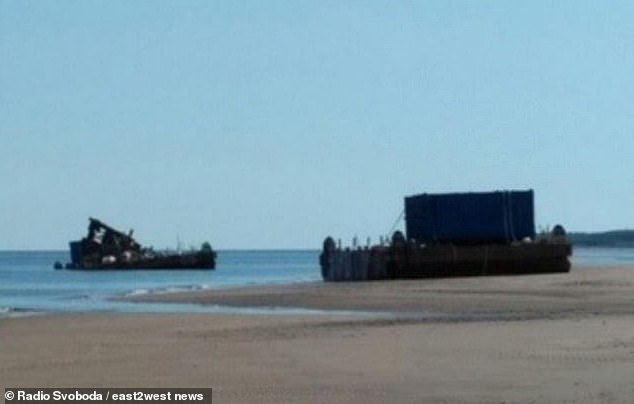 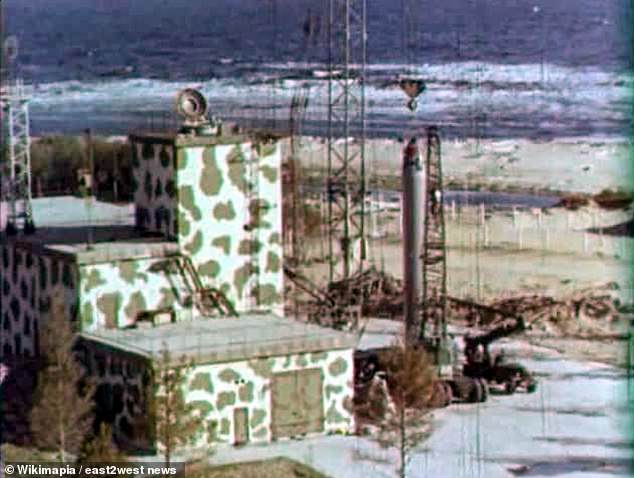 The footage comes despite a Russian military warning that the site (pictured, Central Military Naval Testing Area in Nenoksa) is guarded and closed to locals who face ‘horrors’ if they go there due to radioactive poisoning

Contradictory statements from the authorities and their reluctance to reveal details of the explosion have drawn comparisons to the Soviet cover-up of the 1986 explosion and fire at the Chernobyl nuclear power plant, the world’s worst nuclear disaster.

The Defense Ministry denied any radiation leak even as the local administration in Severodvinsk reported a hike in radiation levels and told residents to stay indoors – a move that prompted frightened residents to buy iodine, which can help reduce risks from exposure to radiation.

Russian media reported that the victims of the explosion received high doses of radiation. They said that medical workers at the Arkhangelsk city hospital that treated three of those injured said they hadn’t been warned that they would treat people exposed to radiation and lacked elementary protective gear.

The Moscow Times on Monday cited Igor Semin, a cardiovascular surgeon at the hospital, who scathingly criticized the authorities in a social network post for failing to warn the hospital workers about the deadly risks.

‘They were abandoned and left to fend for themselves,’ the newspaper quoted Semin as saying.

Asked about the doctor’s statement, Kremlin spokesman Dmitry Peskov said that the authorities will look into the matter.

Officials have said the explosion in Nyonoksa occurred during tests of a ‘nuclear isotope power source’ of a rocket engine – a cryptic description that made many observers conclude that the test involved one of Russia’s most secretive weapons – the prospective Burevestnik (Storm Petrel) nuclear-powered cruise missile which was code-named ‘Skyfall’ by NATO.

U.S. President Donald Trump has thrown his weight behind that theory, saying the U.S. learned much from the failed test. 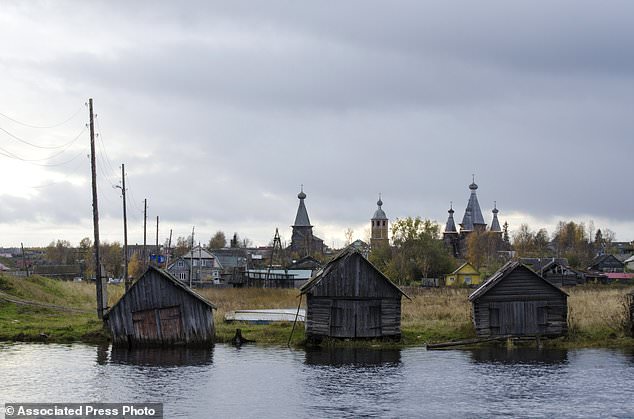 This photo taken on Oct. 7, 2018, shows a village of Nyonoksa, northwestern Russia. The Aug. 8, 2019, explosion of a rocket engine at the Russian navy’s testing range just outside Nyonoksa led to a brief spike in radiation levels and raised new questions about Russian weapons