Geneva: The United Nations top human rights body has appointed an expert on climate change for the first time, a move that is expected to embolden environmental defenders and provide more support for victims of extreme weather.

The new Special Rapporteur position was formally created by the Geneva-based Human Rights Council in October at the same time as the body recognised access to a clean and healthy environment as a fundamental right. 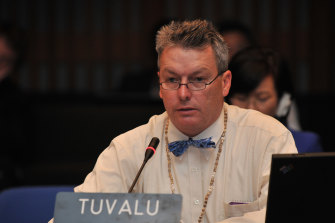 The first to hold the post will be Dr Ian Fry, who holds both Australian and Tuvaluan nationality. He has negotiated on behalf of least-developed countries including at the 2015 Paris climate conference where he helped ensure that human rights were part of the final package.

The mandate of the new independent expert is to “study and identify how the adverse effects of climate change, including sudden and slow onset disasters, affect the full and effective enjoyment of human rights and make recommendations on how to address and prevent these adverse effects”. 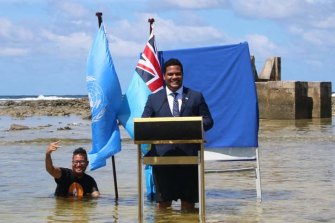 Tuvalu Foreign Minister Simon Kofe addresses COP26 standing in the rising seas threatening his island, which could be lost beyond 1.5 degrees of warming.Credit:AFP

In his letter stating his reasons for seeking the post, Fry stressed the need for action to help those forcibly displaced by extreme weather, having witnessed this first-hand after Cyclone Pam in Tuvalu in 2015.

“I believe the displacement due to climate change is one of the greatest human rights threats confronting the international community,” he wrote.

Fry, who teaches environmental policy part-time at an Australian university, was one of 26 candidates for the position, UN documents showed.