Today, much of the US state of Montana is a harsh, dry landscape of sharp slopes and eroded eddies carved out of red clay. Life must be painstakingly eked out. French settlers called it les mauvaises terres: the badlands.

But in the Late Cretaceous, when the earth was warmer, Montana was covered in thick vegetation. Palm trees and pines, swamp cypress, laurel magnolia, cinnamon, even hops and cannabis dotted floodplains and ran along the banks of vast rivers. In these verdant forests, dinosaurs roamed. 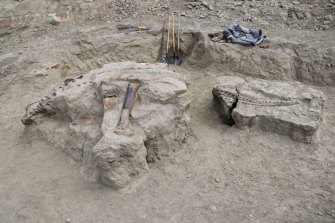 The near-complete fossil of a 67 million-year-old adult triceratops that once roamed what is now the badlands on Montana.Credit:Heinrich Mallison

About 67 million years ago, a triceratops stumbled and fell, its 12-tonne body crashing into the soft soil on the edge of a creek. The body slowly slid down until it was submerged. Over time, the creek piled layers of sediment on it, turning bone into fossil the colour of dark chocolate.

This fossil will arrive at Melbourne Museum late next year, after the institution won a multimillion-dollar race to secure it. The museum's palaeontologists think it might be the world’s best, nearly every bone accounted for and in its right place, complete with evidence of skin and tendon.

"In the 130 years since triceratops was first brought to light, there have been perhaps four or five other specimens that begin to approach the magnitude, completeness and exceptional quality of preservation," said Erich Fitzgerald, senior curator of palaeontology.

"This one stands way out in front. It's going to be a canonical example." 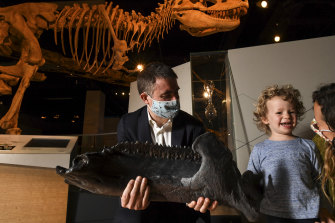 Along with tyrannosauruses and diplodocuses, triceratops are one of the ancient world's iconic dinosaurs. Yet we know almost nothing about them.

Only a handful of complete fossils have been unearthed. Most fossils in museums are composites of multiple triceratops; some facilities have even had to quietly use bones from other dinosaurs to complete their skeletons.

Melbourne only got this one thanks to a tip-off Dr Fitzgerald received – and the museum's willingness to part with $3 million.

"It's extremely enigmatic, considering it's one of the most iconic dinos. It's incredible to me how little we actually know about this species," said Hazel Richards, one of the museum's palaeontologists. 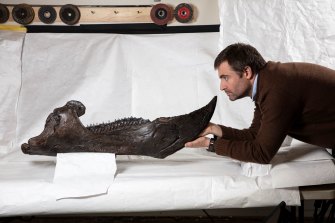 Dr Erich Fitzgerald said the exceptional quality of this triceratops makes it one of the most informative dinosaur fossils in the history of palaeontology.Credit:John Broomfield

We can guess at a few things. The creatures were the size – and four times the weight – of a ute. They were herbivores, but their beaked mouths suggest they were fussy eaters, picking from the tastiest shrubs. They lived solitary lives. And other fossil finds from Montana's badlands suggest they were surrounded by predators like tyrannosauruses and its smaller upright-hunter cousins.

That likely explains both their huge size, said Ms Richards, and the effort evolution went to to keep them safe: an enormous skull, a spiked bony frill to protect the neck, and three horns that look lethally sharp, even as fossils.

"The bigger you are, the harder you are to kill," said Ms Richards.

In life, its skull is thought to have been covered in hair-like keratin, which would have given it a brightly coloured appearance. 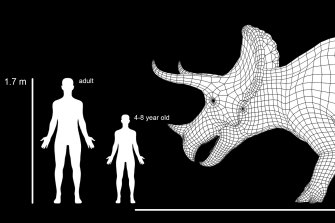 Scientists say adult triceratops were the size – and four times the weight – of a ute.Credit:Museums Victoria

In death, buried under layers of sediment, minerals like iron and silicon have slowly leached in and replaced bone, leaving what Dr Fitzgerald described as an "exact replica" of the skeleton, coloured a dark chocolate brown.

Montana is ideal country for dinosaur hunting. Ancient forests mean there are a lot of buried bones, which erosion and tectonic uplift is now starting to reveal. Those bones are a hot commodity: oil and gas companies tried to argue in the state's supreme court this year that fossils were technically minerals and so should belong to them.

Melbourne's new triceratops was found completely by accident. A private dinosaur hunter, hiking through the badlands, was forced to take scramble down a slope after heavy rains washed out his path. As the clouds cleared, the sun glinted off white bone, newly revealed by the rains.